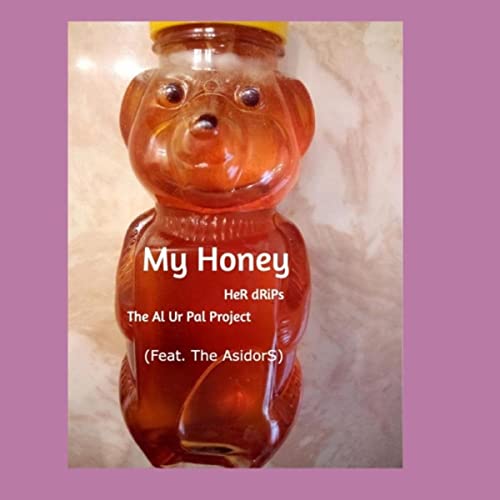 With almost neo-psychedelic buoyancy, the melody that greets us in the opening bars of “My Honey (Her Drips)” is one almost too strong to resist, but if you think this is all The Al Ur Pal Project is hitting us with in this single, you’ve got another thing coming.

Clocking in at over four minutes in total length, this is on the longer side of the pop spectrum when you consider how short and insular a lot of the content making it onto mainstream charts has been, but it doesn’t feel like an extended jam that requires a little more focus from the audience than it ever did the artist. The vocal here is stunningly smooth, offered up by The Asidors, but it’s not taking away from the true star of the music – the percussion, which in itself is one of the more tonally expressive components I’ve had the pleasure of examining in a while. There’s no doubt that Al Wordlaw, the force behind this composition, knows his way around the recording studio, but what’s more is that he isn’t holding back from his ambitions; truth be told, he’s letting them swell with a nifty indulgence I need more of in my life right now.

The Asidors seem to get a little more of the spotlight in “My Honey (His Drips)” than they do in the more feminine mix of the track, but Wordlaw’s compositional hand is never out of focus. In all honesty, I get the impression that he doesn’t want to be front and center in this mix, but his voice is so well represented by the beat we’re never given a moment to evade the subtext of what he wants us to understand here.

Lyrics are one thing, but to cultivate an inspired mood with little more than the searing melodic dagger you’re wielding on either end of the mix is something a lot more impressive than what the status quo calls for. I’ve been more or less disappointed with the lack of creative framework in pop music over the past couple of years, but from the looks of what we’re getting in both of these songs, so has Wordlaw. He’s not backing down from the challenge of going bolder with his music here, and I think his peers could stand to learn something from his attitude.

Contrast rules supreme over every other element in both versions of “My Honey,” but as the main title of this song would imply, there’s nothing but sweet satisfaction awaiting listeners on the other side of the play button this September. The Al Ur Pal Project is an entirely new act to me, having never listened to their music before sitting down with these tracks, but I’m getting a strong feeling here that they’re going to be a presence in the underground for some time to come still. This is a good era for pop music, especially in the underground, and artists like Al Wordlaw who are willing to take things an extra mile in the studio are the biggest reason why.

WEB3 Native DJ/Producer/Alien Wobblebug, from Wuki, shares debut release “WOBBLEDRUG”
The Most Realistic Part of Blonde Is the Costuming
“We Believe That Access to Abortion Is a Basic Human Right”
Meet the Writers on the Baillie Gifford Prize Longlist
Slash/Back Trailer Teases Battle Against an Alien Invasion