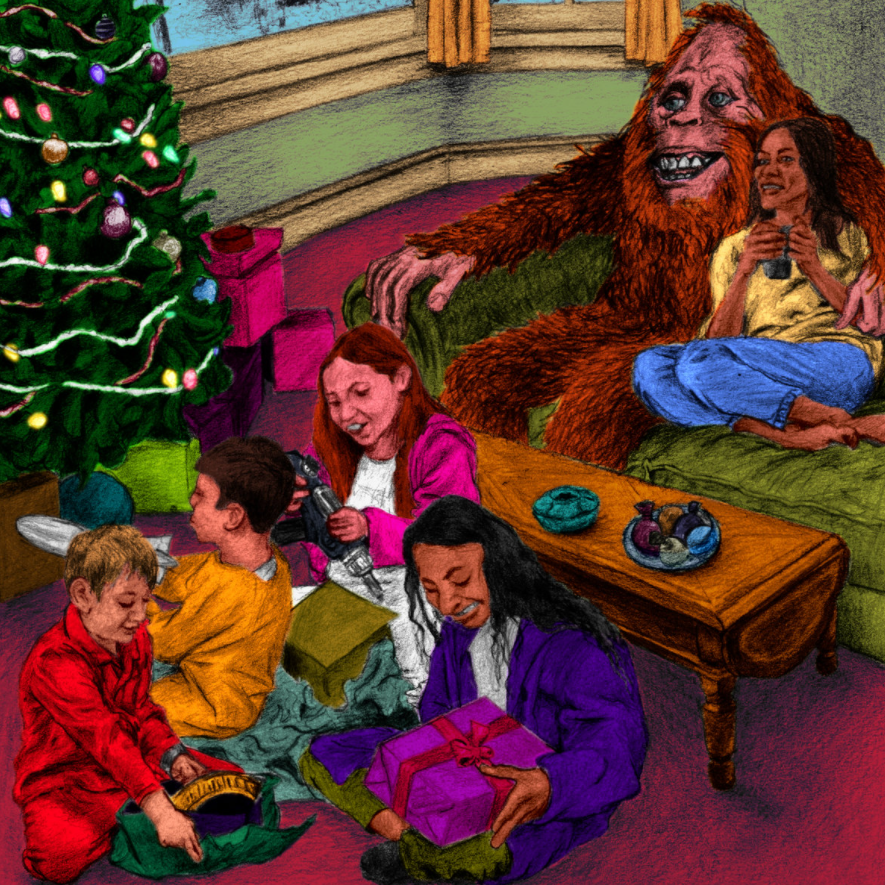 Wintry albums frequently suggest themes of life and death, suffering and pleasure, as well as the desire to change and become something stronger and more affectionate than we ever knew we could be, and to this end Streaking in Tongues’ Christmas with Bigfoot is quite the conceptual and on-point listen. In collaboration with poet Marty Achatz, Streaking in Tongues explore mysteries of thought around every corner in Christmas with Bigfoot, led by the straightforward and surreal verses of Achatz himself.

This is essentially a spoken word album with vitality-lined accents of instrumentation, but for what it lacks in the elaborate eccentricities of past releases from this duo it makes up for in artistic endeavors well outside the mainstream spectrum, starting and ending with the topics explored in tracks like “Bigfoot and Little Women” and “The Christmas Eve Wrinkle,” which together account for nearly 35 minutes of audio. It’s difficult to make a super conceptual offering accessible to the masses, but to me, Achatz and his musical peers do as much inside of the six movements this record has in store for anyone who gives it a listen this holiday season.

The purely spoken “Live Long and Prosper” is quite the brooding entry beside the simple “Bigfoot Noel” and “Christmas Grammar 2020,” and I think it’s all the more stoic because of its black and white setting comparative to the other material here. Camp isn’t an element of the progressive componentry in Christmas with Bigfoot; from where I sit, “Bigfoot and Little Women” is presented more from a place of pain than it is commentary, and it’s impossible to interpret its wildest of eclecticisms as anything other than a product of raw vulnerability. Even when the music is minimal, such as in “The Hand of God,” it’s influencing how we’re interpreting everything spoken to us by Marty Achatz, which is more or less the exact desired result of this kind of collaboration. Balance isn’t all that easy to achieve when it comes to making something like Christmas with Bigfoot, but you’d never be able to guess as much if you were going off of the performance given by the players in this album.

I came into this review with some pretty lofty expectations, and rightly so – Streaking in Tongues’ back to back killers in Kindergarten Prayers and Oh My Darlin’ both made my Best of 2018 and 2019 lists upon their respective releases – and anyone else hoping for another gem in this latest cut is not going to be disappointed in the least. There are plenty of experimental indie outfits making big waves in the American underground right now, but of those I’ve been following in the past four years, I can’t say there are any to go as deep down the creative rabbit hole as this pair does every time they start recording. Marty Achatz shines in a leading role here, and with any luck, we’ll hear him working beside these players once more in a collaborative effort further down the line. Frankly, the chemistry between the three of them is just too good to go unexploited.