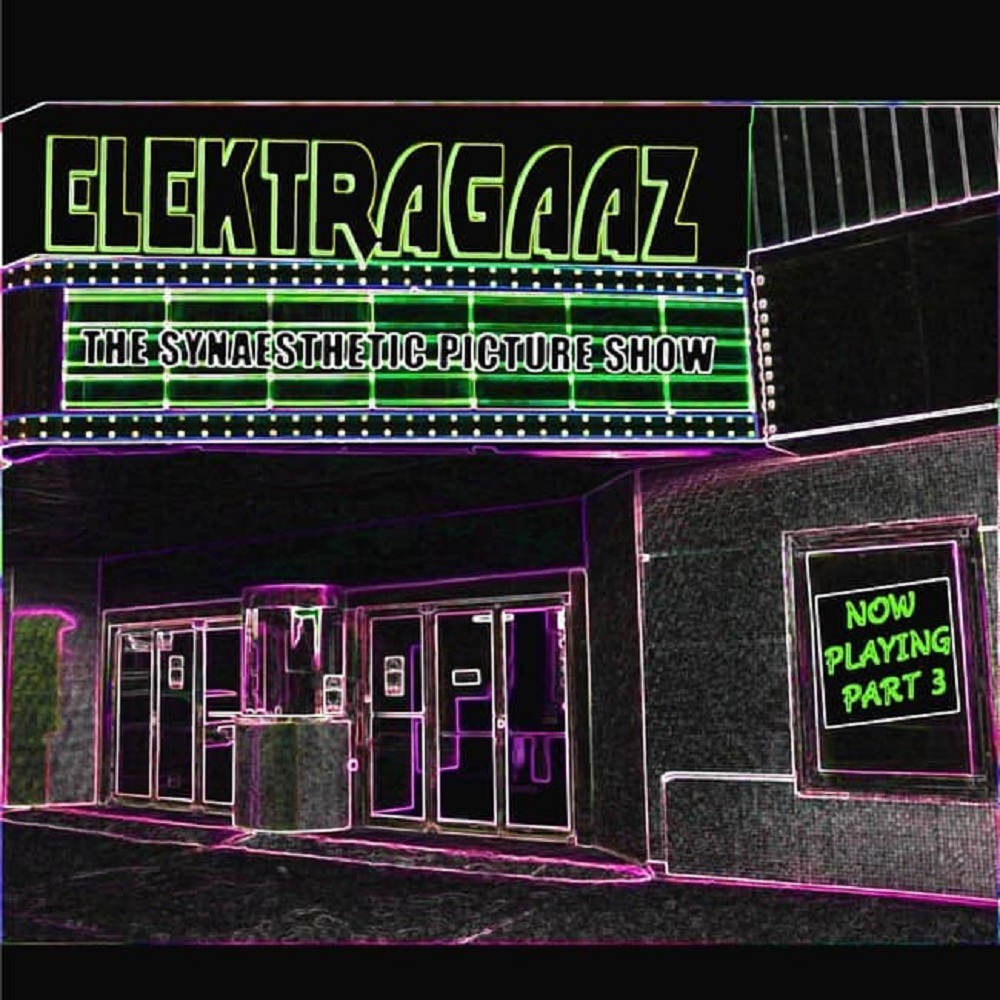 Elektragaaz has released their third EP, “The Synaesthetic Picture Show Now Playing, Pt. 3,” following on the heels of high praise for Parts 1 and 2. The Elektragaaz project is spearheaded by mysterious Frisian composer, Poppo Redband, and is performed mostly by musicians in New York. The music they’ve created together is interesting and unique, blending almost every genre you can think of together into beautiful musical moments. Just when you think you’re going in one direction, they switch it up on you and take it in another; the tracks never get boring or feel drawn out. If anything, you’re left wanting to hear more.

“Dancing With Evil Intent” starts off “The Synaesthetic Picture Show Now Playing, Pt. 3” with a jazzy and ominous feeling. It sounds like the beginning of a very dramatic show and hooks you right in. It feels like it’s building up to something big and scary, but as the song ends and the next song begins, you’re given emotional whiplash. (In a good way.) “Santa Fe Gas & Electric” is the epitome of jaunty and upbeat. The fiddling makes me think of jigs or barn dances. There’s something folky and classic about it, but it also feels modernized. It sounds like simple joy trapped in a song.

The third song the the EP, “Sebastian’s Apple” has almost a video game sound to it, particularly one where you’re exploring a world. This track is warm and friendly, and if it was an actual apple, I might be tempted to eat it. Following the pleasantness of “Sebastian’s Apple” comes “To Air Is Human,” which is tinged with rock sounds, but does still sound pretty airy. This song swoops and dives like an agitated bird, bringing that element of sinisterness back in from the beginning of the album. I liked that they injected some darkness back in after a couple of cheery songs.

However, the darkness doesn’t last long, as “Joyboy on the Beach” rolls in like a languid wave. This fifth song is sort of jazz mixed with surfer rock? It does make me think of the ocean and that great feeling of the salty air on my face. While it’s overall an easy going song, it has some interesting time/rhythm changes that keep it interesting and different. It does get slightly eclipsed though by the final song on “The Synaesthetic Picture Show Now Playing, Pt. 3,” “The Ghost of Ozymandias.” It’s an epic sounding psychedelic rock song with a killer lead guitar and it was the perfect strong ending for the “Picture Show.” And it certainly made me envision pyramids and someone travelling across the desert.

From top to bottom, “The Synaesthetic Picture Show Now Playing, Pt. 3” is a super cool EP. Elektragaaz and Redband are effortlessly able to capture a mood and a story within a song and tell it to the listener without using a single verbal word. If you allow the music to swallow you up and you let your mind wander, you’ll find that these songs will transport you to another time and place.

Calvyn Cass “Are You Out There”
Leland Sklar and Cosmic Wire Announce “Leland Sklar’s NFT Store”
April Rose Gabrielli’s Single “Do You!” Wins an Akademia Music Award, Gets Nominated for an HMMA Award and Gets Chosen As Official Selection of the “Female Voices Rock” Film Festival
Exclusive Interview With Blooming Fire
“The Ballad of Sanaleigh” by Tash Hagz