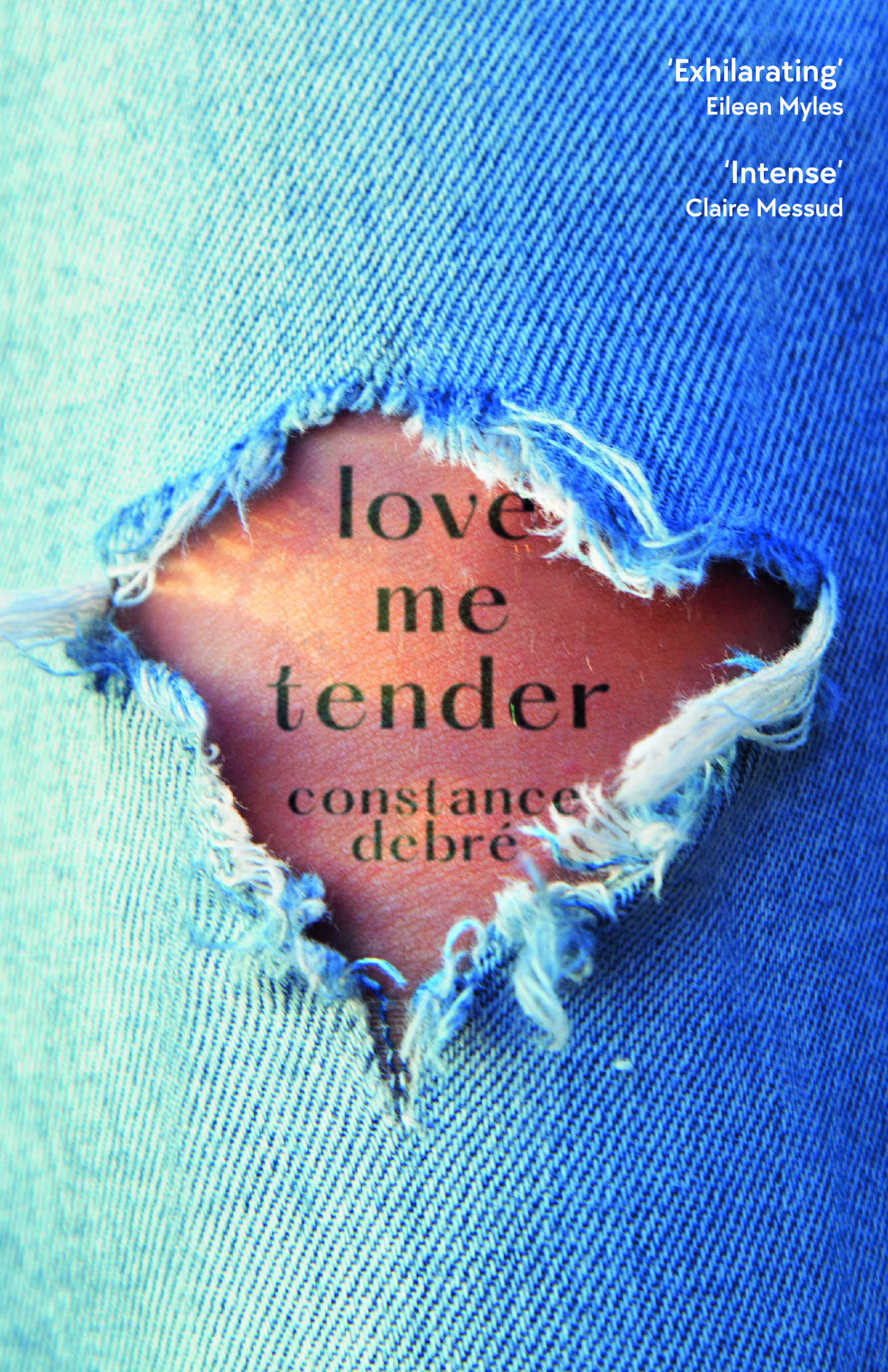 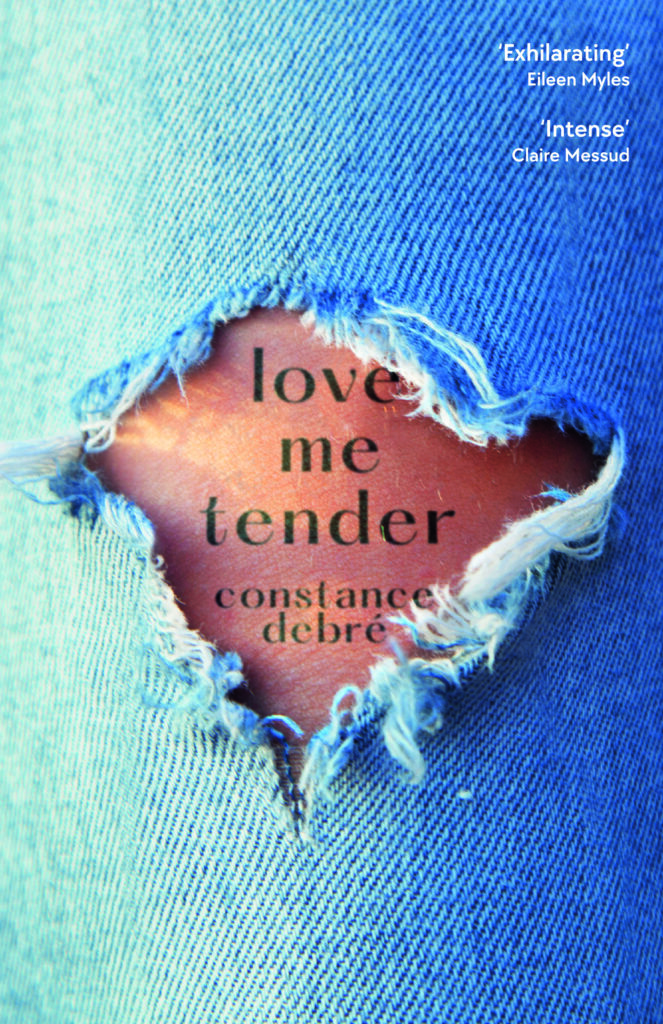 The following is from Constance Debré’s Love Me Tender. Debré left her career as a lawyer to become a writer. She has written three other novels, Play Boy (Prix de la Coupole 2018), Un peu là, beaucoup ailleurs (winner of the 2005 Prix Contrepoint), and Manuel pratique de l’idéal Abécédaire de survie..

A backdrop of water towers, regional train stations, abandoned football fields, a Lidl carpark, ugly concrete, patchy grass, the stinking, muddy banks of the Loire river, all of it bathed in a golden light. The taxi came to pick me up in Saint-Pierre-des-Corps, we drove past Camélinat stadium, the railway workers’ estate, avenue Lénine, a bar called La Loco, we took route de la Levée, we drove along the Loire, the river was low, it was a gray day, we went past Leclerc, it has a McDonald’s drive-thru now, we took the road up through the village, the driver dropped me off outside the house. My dad in front of the TV, the chimney full of ash, the nurse coming by to give him his Buprenorphine and whatever else he takes, the little bottles of Label 5 he buries at the bottom of the bin before I get there, the broken radiators, the cold tiles, the crumbling bathroom, the dust covering everything. Sometimes I love Montlouis because of how ugly it is, sometimes I just hate it.

When I was a child, Montlouis was the house opposite, where my grandparents lived. The big house, we used to call it. There was the tennis court, the swimming pool, the raspberry and redcurrant bushes, the hunting lodges, the wooden garage for bikes, the Renault 4, the Renault 16, the lunches, the dinners, the small dining room, the large dining room, the bedrooms named after colors, the laundry room, the huge cupboard underneath the living room staircase with the wooden tennis rackets, some in their cases, some warped by time, the records, the old toys, the Jules Verne books in the library upstairs, Madame D., the maid who came in to clean in the morning and serve meals, limping because she had polio, speaking with a Belfort accent. My grandparents died, the house was sold, my dad doesn’t have a cent to his name, for fifteen years he’s been living on his own in the house where the cook used to live, he has no regrets. Before, he used to watch TV and smoke. Now he’s hooked up to an oxygen tank all the time, he’s quit.

I come to Montlouis to get away from everything. Me, my dad, each at the opposite end of the house, we hardly speak to each other, we don’t sit at the table together, we bump into each other in the kitchen when we make our sandwiches and instant noodles, me putting a bit of ham inside a folded-up slice of white bread, him drowning his noodles in Tabasco. I come here to see him too, of course, even though I don’t tell him that, even though we never talk about it. Two cats pretending to ignore each other, meeting in the middle of the night. You have to get used to this peculiar language, and whenever I bring girls over, even though I warn them, they’re still a bit shocked, they still think we’re crazy, and often they leave me soon after. But I think this is the way everyone should love. There are still a lot of Paul’s things here, his bike, his room, his dress-up clothes, his toys. At first it felt like they belonged to a dead person, but now it’s fine, I’ve gotten used to them.

I took out the big black leather satchel with my mom’s book of modeling shots inside. I always used to think she looked too made up, too sexual in photos from before she was my mother, it made me a bit uncomfortable. I flick through the pages of the books and her beauty smacks me across the face. Her beauty and her power. I guess it would have taken strength to be around her, it would have taken guts, maybe my dad didn’t always have it in him. I take out a photo, I show it to my dad and say, OK Dad, maybe your life right now, well . . . but look at her, not everyone can say they had someone like that in their life. Yes, he says. Then, I don’t know why, but I say, It can’t have been easy to love her. I feel him looking at me, stern. No, he says. He goes back to reading his book, I put the photos away. The good thing about opium, about heroin, is that when you’re really into it, you don’t want to fuck anymore, you can’t even get hard, you don’t give a shit. Why did he do drugs? G. asked me one day, much later. He did drugs because he did drugs.

He’s probably the only one who really understands my grief, because we both have the same way of loving children, him and I. But whenever we talk about Paul, there’s always a moment where he takes his head in his hands, gives me a strange look, and says, It can’t be easy for Laurent. There’s always a moment where it’s Laurent he feels sorry for, Laurent he understands, where he becomes Laurent, where he suffers like Laurent. It does something visceral to them both, the fact that I’m sleeping with girls, I see it whenever I see my dad. My dad’s body is Laurent’s body. It’s the same panic they experience. And suddenly my mind is flooded with all the images of my dad that I’d forgotten about because they’re so different from everything he is. And in that moment, I remember that this gentle man, whom I’ve never seen angry, who’s never jealous of anyone or anything, would sometimes hit my mother, my mother, who was the strength to his weakness. It didn’t happen every day, but it happened, it did happen. I remember. Sometimes I wonder whether my son will struggle to be a man as much as his father does, as much as my father does.

The nurse knocks at the door, drops off a tumbler with his evening medication and sleeping tablets inside, then leaves. He takes them and goes to bed. Goodnight darling, goodnight, Dad. I watch him go, watch him walk down the corridor, it’s starting to show, the fact that he’s going to die, I wonder when, I wonder whether I should talk to him or whether I should just carry on acting as if he were already dead.

The guy at the swimming pool didn’t believe me when I went to renew my three-month pass. He thought my birth date was off by a decade. Same thing happened the other day when I answered the Vieux Campeur satisfaction survey. They ticked the 25-35 box without asking me. It’s always nice when that happens. Obviously I look a certain way, dress a certain way. But that doesn’t explain everything. You gain ten years, easy, when you become gay. Everyone knows that. Dorian Gray effect guaranteed. I say this for the benefit of straight mothers everywhere. They’re often quite depressed about aging. There’s a simple solution. Just so they know. You could say that at twenty I was actually forty, and today I’m twenty. That’s what people tell me. They say I’m living my teenage years now. I see what they mean. But I think it goes even beyond that. I’m turning time on its head. I’m taking a walk through it. Doing things ass-backwards. I’m messing with the fast-forward and rewind buttons. I’m in Back to the Future. I’m mixing all the ages up, switching from one to the next, choosing them at random, creating a signature cocktail, my very own recipe. It’s the same with clothes, the same with gender, it depends on my mood or the situation. I’ve always thought adults were bad at acting like adults. With the girls I’m seeing, I’ve rediscovered the tomboy I was as a child. Long time no see. That’s why it was strange going through all this with Paul by my side. Not because of my sex life. But because part of the new me is about revisiting my childhood, a time before he was born, establishing a connection to the me that existed before him, a me without him. It was like being ten or twelve years old and being his mother at the same time. Two different ages at once. Or all the ages. Or no age. That’s what one of the girls told me once, You have no age. Nice. So maybe that’s why gay people never seem to age. At least, not in the same way.

From Love Me Tender by Constance Debré, published by Semiotext(e)/Native Agents (US), and Tuskar Rock Press (UK). Excerpt reproduced with permission from the publishers. Translation copyright © 2022 by Holly James.

I’m Sorry, But the Peplum Is Back
Louis Vuitton’s New Watch Is Out of This World + More Fashion News
‘Gossip Girl’ Reboot Star Jordan Alexander Grateful Despite HBO Cancelation
Dave Bautista Is Giving Up On His Dream of Playing Bane
30 Black-Run Beauty Businesses to Shop Year-Round