The concept of digital transformation for the telecoms industry has essentially degenerated into a question of how much to outsource.

At Digital Transformation World last week we reported that collaboration with ‘hyperscalers’, which essentially means the three US public cloud giants, was the main theme of the event. That wasn’t always the case. While the TM Forum, which runs the event, has always been about harmonizing the various technologies involved in running telecoms networks, it never used to conflate this process so strongly with the move to the public cloud.

In subsequent conversations it became clear that, while the benefits of leaning on the likes of AWS, Azure and Google Cloud for some stuff are clear, exactly what and how much should be handed over is still hotly debated. And then there’s the perennial question of control – what are the downsides of placing so much of your core competence in the hands of a third party, especially when it’s so hard to take it back if you change your mind.

The concept of ‘vendor lock-in’ is somewhat over-simplistic since there will always be a degree of lock-in to any technology partnership. Open RAN, for example, is often touted as the solution to being locked into a relationship with one of the few big kit vendors the Americans allow us to work with these days. But competition is limited in many parts of the Open RAN stack and reliance may just shift to the system integrator used to stitch them all together.

In the case of the public cloud, it is apparently very difficult and costly to switch from one provider to another. In other words, you are somewhat locked in. But as was frequently highlighted at the DTW event, many of the innovations, efficiencies and new business models associated with digital transformation are only available via an intimate relationship with the public cloud, so what’s an operator to do?

Perhaps unsurprisingly US operators have been among the keenest to dive head first into the public cloud but their contemporaries elsewhere continue to hedge their bets. In the UK BT continues to adopt a cautious approach to the public, as opposed to private, cloud. Meanwhile Vodafone has made recruiting in-house IT talent a strategic priority, in part to ensure its technological independence.

Luckily for them, there may be more than one way to skin the digital transformation cat. At a recent media and analyst briefing Ericsson positioned its mega acquisition of Vonage as a critical piece of the puzzle in enabling its customers to monetize 5G. Noting that it’s difficult to do so through the traditional channel of selling subscriptions, CEO Börje Ekholm said “In the future CSPs will derive a significant portion of their revenue through these network APIs.”

APIs (application Programming Interface) are the main reason Ericsson spent so much on Vonage, as they are a key component in the concept of ‘network exposure’, which Ericsson says is all about ‘making network capabilities, such as data and network services, easily available for customers and partners to innovate on.’

The first slide from the Ericsson Vonage presentation below outlines how they see the two companies complementing each other, with an emphasis on network exposure. The second illustrates some of novel business opportunities this API-enabled network exposure is expected to bring about. 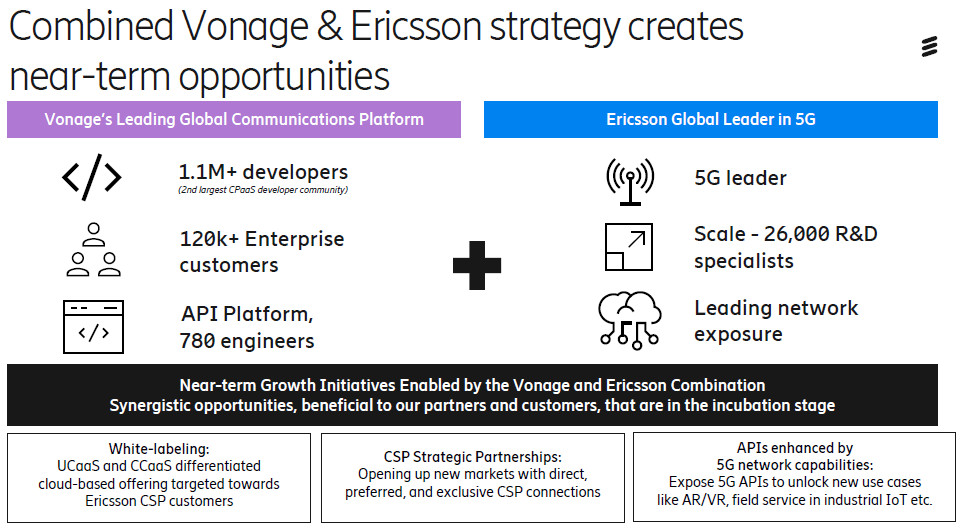 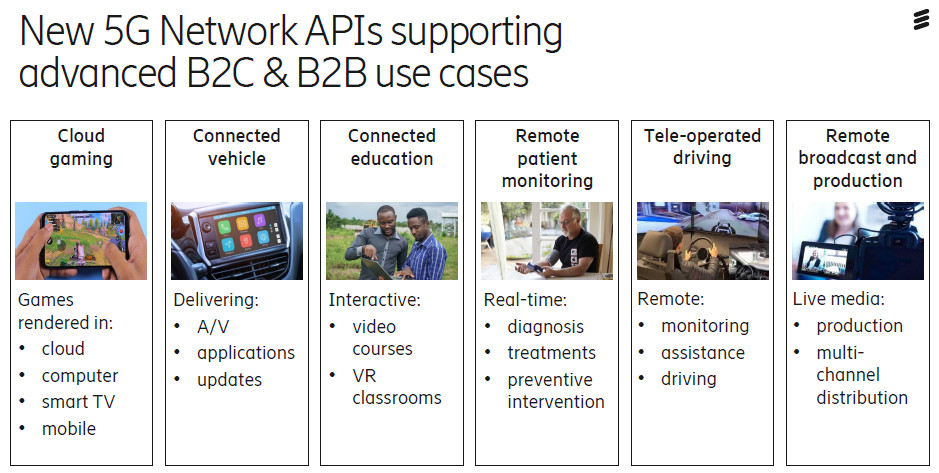 Our understanding of digital transformation is that a big point of it is supposed to be that it allows communications services providers to evolve into much more than ‘dumb pipes’ and offer all kinds of added value to a greatly expanded total available market. Isn’t that what Ericsson+Vonage is promising? And yet there was not a single mention of the public cloud in the entire 30-slide deck.

This is not a dichotomy, however. Most objective commentators on the matter talk of some kind of hybrid scenario in which some stuff is moved to the public cloud, some in the private cloud and some just kept on premise, the old-fashioned way. The factors that go into calculating the optimum balance are unique to each company and way above our pay-grade, but it’s wise to take evangelists at either side of the debate with a pinch of salt.

At the DTW event we learned that the telecoms industry is prepared to put aside its resentment towards the US big tech companies that make so much money over the top of their networks and explore mutually beneficial business relationships with them. But, as Ericsson seems keen to suggest, the public cloud is not a panacea. If the tools it plans to offer enable operators to transform their businesses without having to sell too much of their souls to do so, then maybe it’s worth waiting a bit longer before taking the plunge.