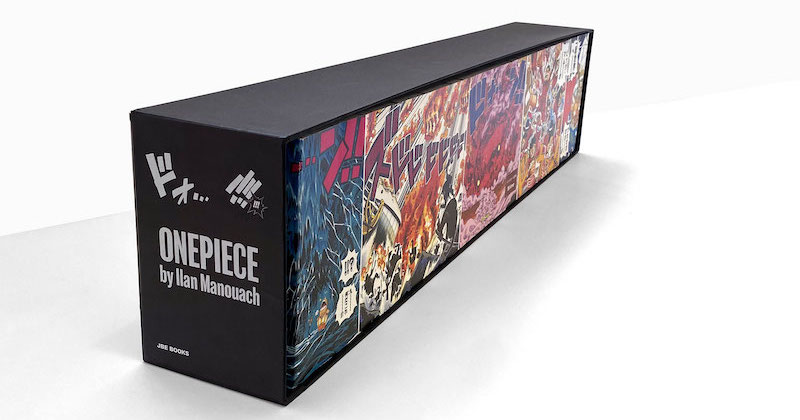 The “book” in question is a 21,450-page single volume edition of the long-running manga One Piece by Japanese manga artist Eiichiro Oda, smushed together so as to make it impossible to read.

As reported in the Guardian earlier today, the book isn’t actually credited to Oda, who was unaware of the project and who will receive no royalties. It is being sold instead as the work of Ilan Manouach, the Belgian multidisciplinary artist who has designed the limited edition volume as a commentary on the way comics exist as both commodity and literature. ONEPIECE (not to be confused with One Piece) “proposes to shift the understanding of digital comics from a qualitative examination of the formal possibilities of digital comics to a quantitative reappraisal of ‘comics as Big Data.’”

Manouach, whose bio reads like that of a Wes Anderson character, printed out the entirety of One Piece, reclassified the pages as “sculpture material,” bound it together to create a big ‘ol book-shaped sculpture which, “materializes the ecosystem of online dissemination of comics.”

ONEPIECE’s limited edition run of 50 copies sold out within days of its release on 7 September, so there’s obviously a market for…whatever this is.

Despite the assurances of Manouach’s French publisher, the legality of this endeavor does seem a wee bit suspect. Having said that, Eiichiro Oda is the best-selling manga artist of all time, with 516.5 million tankōbon copies of his opus in circulation worldwide and a net worth of around $200m, so he’s probably not too bothered about a Belgian conceptual artist appropriating his work. Maybe he even thinks it’s cool. Or maybe he’s currently sitting down with a team of attack dog lawyers, strategizing on how best to sue Manouach and his publisher into the poor house.