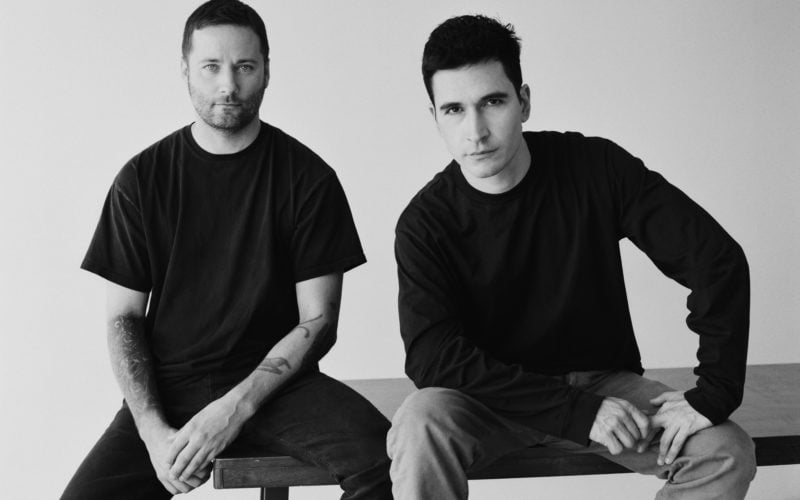 “It still feels like the first day in many ways, and it also feels like at any second, it could all disappear.”

What happens when the new kids on the block are no longer new? That’s what Jack McCollough and Lazaro Hernandex of Proenza Schouler are still trying to figure out. FASHION spoke to the designer duo about the past, the future, and what the brand’s 20th anniversary means to them.

Congratulations on Proenza Schouler’s 20th anniversary. How are you both feeling about the landmark?

Lazaro Hernandez: “It still feels like the first day in many ways, and it also feels like at any second, it could all disappear. We’ve never felt ‘established.’ We’re always trying to do better, learn and evolve.”

Jack McCollough: “It’s pretty surreal! We never look back, so sometimes we’re our own worst enemies. We like to dissect and destroy everything we just put out on the runway, which motivates us to be better season after season.”

You first started working together while studying at Parsons The New School in New York City, correct?

JM: “Yeah. Up until senior year, we were both doing our own thing in school. The fashion design program was pretty full-on, so we’d take turns working overnight at each other’s house. But because we spent so much time together, our aesthetics and ideas began to blend, and in our final year, we were like, ‘Maybe it’s best if we don’t compete against each other for our thesis collection and collaborate instead.’”

Famously, Julie Gilhart, former senior vice-president, fashion director, at Barneys New York, and Anna Wintour were early champions of Proenza Schouler. Have you maintained those relationships over the years?

JM: “In the beginning, we really didn’t know what the hell we were doing [laughs], but we’ve had lots of great mentors who’ve really helped guide us. And we stay in touch. Julie took us under her wing and has always been our cheerleader.”

LH: “And Anna’s a good friend of ours. She has always been super supportive and has become like family to us.”

Back in the late 2000s, your PS1 bag became a must-have accessory. Why do you think it struck a chord with so many people?

JM: “I think all the bags around that time were very logo-centric and structured. The PS1 is a stripped-down bag; it doesn’t have a logo, and it’s slouchy.”

LH: “Also, the right people were carrying that bag. Mary-Kate Olsen might’ve been first, and then Rihanna. It was also on Gossip Girl.”

JM: “And it was released when we only had a ready-to-wear collection and everything was quite elevated. People who wanted a piece of the brand but couldn’t afford it could now have one of our bags; I think it just had a broader reach.”

Earlier this year, you told The Business of Fashion: “Back in the day, we used to make clothes that our friends, who are editors and stylists, wanted to shoot. Now, we’re making clothes they want to wear.” Can you expand on that?

LH: “We used to design based on what we thought was cool or new, but we didn’t think about the practical needs of the woman. That’s so sad to say [laughs], but it just wasn’t our approach. These days, we are making more ‘real’ clothes with notes from our previous work, which feels more modern. And the business has taken off because we are actually making stuff that people want to buy.”

So, after producing countless collections, how do you stay inspired?

JM: “The fashion game is relentless, so it was nice to slow down during the pandemic. We spent a good five months on our farm in Western Massachusetts, and it was great to feel re-energized and re-inspired. We both dived into other creative outlets that had always been interesting to us but that we had very little time to engage with before.” [McCollough learned how to play the guitar, while Hernandez learned photography.]

LH: “It was also nice to present a collection differently because we have been doing shows for almost 20 years. We put out a book for Spring 2021, and over the next few seasons, we created a website and made videos. Exploring new media and designing with a different intention was cool.”

What’s next for the brand?

LH: “Our Pre-Spring 2023 collection! We use pre-collections as a kind of laboratory for ideas. We focus on solid, wearable clothing and accessories that bring joy and function to our customers’ lives, but we also start playing around with ideas, silhouettes and fabrics that we might be feeling for the main season’s runway show.”