That doesn’t mean much without any numbers to look at, so here are some: In 2021, Telefónica turned over €39.28 billion, and generated OIBDA of €21.98 billion. Depending how you translate Telefónica’s guidance into actual percentage-point improvements, in 2022, Telefónica can reasonably be expected to generate revenue of approximately €40.5 billion and OIBDA of approximately €22.53 billion. To find out if that is anywhere close to the mark, check back next February, when Telefónica publishes its full-year 2022 financials.

Telefónica’s confidence stems from a solid second-quarter performance across the group. Revenue at all its operations was up year-on-year, with Spain – its biggest single market – improving by 1.3 percent year-on-year to €3.09 billion (see chart). Growth was attributed to uptake of its higher-ARPU convergent services offering, and roaming. It was a similar story in Germany, where strong commercial momentum at the mobile business helped to increase revenue by 5.8 percent on Q2 last year. 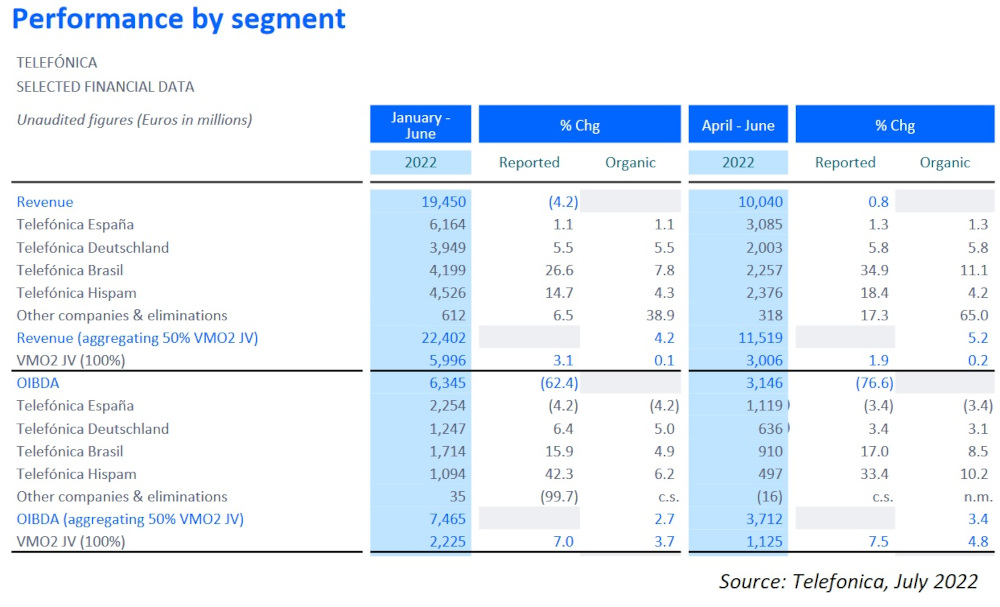 Meanwhile in Brazil, revenue was skewed skywards by the integration of troubled rival Oi’s mobile assets, and in the rest of LatAm, Telefónica benefited from strong demand for all its services, including postpaid mobile, IPTV, and fibre and cable broadband.

“We are pleased to report improved growth momentum as we continue to leverage opportunities in our markets and deliver towards our strategy focused on value creation,” said Telefónica CEO José María Álvarez-Pallete, in a statement.

“Revenue and OIBDA accelerated growth year-on-year in Q2 22, both in reported and organic terms, demonstrating our ability to proactively manage existing macro challenges. In reported terms, revenue grew annually for the first time since Q3 19 and organically, with all businesses growing simultaneously,” he added.

Indeed, group revenue inched up 0.8 percent to €10.04 billion, while OIBDA came in at €3.15 billion, up 3.4 percent excluding last year’s capital gain from the creation of Virgin Media O2 in the UK.

On that note, it’s worth mentioning VMO2, which returned to revenue growth in the second quarter. The telco netted 7,500 fixed-line and 13,300 postpaid mobile customers in the three months to 30 June, leaving it with 5.77 million fixed-line users and 33.1 million retail mobile customers in total. Revenue crept up by 0.2 percent on last year to £2.55 billion, driven by fixed and mobile price rises. Adjusted EBITDA was up 4 percent to £972 million.

“It’s one year on since Virgin Media O2 was born and, while we’ve got much more to do, we came out of the gate running and achieved a huge amount in our first year as a joint business,” said VMO2 chief Lutz Schüler, in a separate statement. “In Q2, we’ve grown our fixed and mobile customer base once again, as fast and reliable connectivity remains a top priority for consumers and businesses. We’ve seen an improved revenue performance alongside our best quarterly profitability growth since we merged, putting us in solid shape to meet our full-year guidance.”

VMO2’s highlights reel also includes the acceleration of its Project Lightning network in-fill and upgrade programme, which reached another 114,000 premises during Q2, up from 101,000 in the prior quarter. Its cumulative Lightning footprint now stands at 2.9 million premises, and it is on track to hit its target of connecting 500,000 this year. On the mobile side, VMO2’s 5G service is now available in 600 towns and cities, and the network is still scheduled to reach 50 percent population coverage by 2023.

“While I’m proud of what we’ve achieved in just one year, nobody in the business is complacent, and we remain focused to deliver even more,” Schüler said.