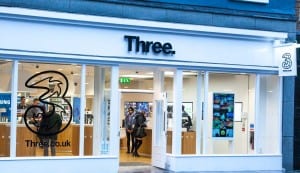 Revenue at the UK-based operator increased 5% in the first six months of the year, but prepaid customer growth and roaming remain areas of concern.

Three UK reported a “solid” set of financial figures for the first six months of 2021 and appeared relieved it has been able to carry through the stronger momentum it experienced in the fourth quarter of last year.

Darren Purkis, chief financial officer (CFO) of the UK’s fourth-largest operator, highlighted positive factors such as the continuing growth in active contract customers, which increased by 6% to 7.7 million in the first half of the year. According to Three UK, this represents the highest rate of growth in four years.

“This is all against a difficult market backdrop as we continue to feel the effects from the pandemic,” Purkis said.

Revenue increased by 5% to £1.17 billion, building on the 2% growth the operator reported for the first quarter of the year. Further reasons to be cheerful include the 15% reduction in churn to 1.1%, the 154% rise in revenue from secondary brand Smarty, a 33% increase in home broadband customers that use Three’s fixed wireless access service, and a doubling of business customers.

EBITDA was broadly flat at £252 million and operating expenses were 5% higher at £368 million.

Areas of concern remain prepaid customer growth and roaming, which continue to be affected by the coronavirus pandemic. Purkis admitted that the pandemic is still having a greater impact on these areas than expected following longer than anticipated periods of lockdown.

Purkis said a complete return to “what we would consider normality” is not likely before next year, “but that’s predicated on not going backwards.”

Three UK is currently in the throes of a five-year strategy to expand its 5G network and implement a comprehensive IT upgrade. As a consequence, capital investments remain at an eyewatering level.

In the first half of 2021, capex increased by 60% to £307 million, excluding investments in spectrum and licences. This follows a 55% increase in the first quarter of the year.

“I think this year and next year you will have the big peaks, and then I would expect it to start creeping down again after that. These will be the two most intensive years,” Purkis said, noting that the bulk of capex is on the 5G rollout.

Three UK is continuing to make progress with 5G, and said its network now covers 30% of the UK’s outdoor population. 5G is now live in 300 locations across more than 1600 sites, and an additional 600 sites have been built and are being prepared for going live. Furthermore, another 3,500 5G sites are in the planning phase.

The operator again boasted that it has the largest 5G spectrum holdings following its purchase of two 10MHz blocks of 700MHz spectrum, which tripled its low frequency spectrum holding.

What about Virgin Media O2?

Purkis was clearly well prepared for questions about the impact that a newly combined Virgin Media O2 will have on the UK competitive environment. He noted that the merger is a “natural tie-up for them” and pointed out that neither he nor Robert Finnegan, CEO of Three UK, have been shy in saying that the market needs more consolidation because of the huge investments required by all operators.

“We’re not focusing on O2 Virgin; we’re focusing on our own business and growth,” he said. “We have a very strong fixed wireless product, which gives us fibre-like speeds for broadband on our 5G. The key for us is getting 5G out there as quickly as possible … putting those fixed wireless and fibre-like speeds into the hands of customers where fibre hasn’t yet reached. We’ve got an opportunity to really deliver on that.”

Purkis added: “And also the quicker we get 5G out there, the quicker we can build a credible business or B2B function as well. Mike Tomlinson came on board last year, building a team; we are building some technology to support that. And that’s a real growth opportunity for us.”