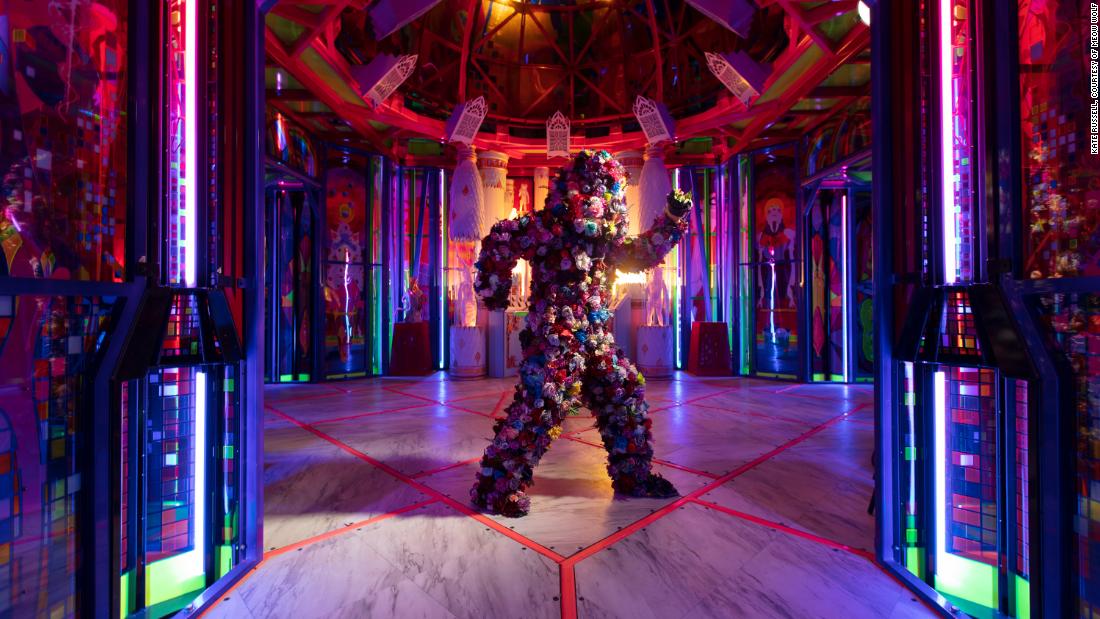 (CNN) — Imagine this: Four worlds collide following a cosmic event 25 years ago. All inhabitants lose their memories, leading to the disappearances of four women.

What sounds like the premise of a sci-fi novel is actually the foundation of art collective Meow Wolf’s third permanent immersive experience in Denver, “Convergence Station.” But it will offer an otherworldly escape.

When the exhibition opens September 17, visitors will become part of the story, exploring the four worlds — kaleidoscopic cathedrals, Corinthian catacombs, lush alien habitats and dazzling but gritty cityscapes — to investigate what happened.

Though the backstory sounds supernatural, it is a story of immigration inspired by the Sun Valley neighborhood of Denver where the building is located, said Chadney Everett, senior creative director of Meow Wolf Denver.

“Convergence Station connects us to four disparate, alien worlds, mysteriously converged together by a rare cosmic event,” Everett said. “Some of its citizens are thrilled for the opportunities of this new world, and others long for their homes. A story expressed within many immigrant communities.”

A first look at Gremlin Symphony at Meow Wolf’s Convergence Station in Denver.

The four floors of the installation incorporate over three years of work by hundreds of artists and collaborators, including over 110 Colorado-based artists. It will open with 79 “mind-bending” projects with titles like “Ruptured Time,” “Crystal Future” and “Indigenous Futurist Dreamscapes Lounge.” And the number of projects will continue to grow, Everett said, as Meow Wolf will look for new Denver artists to collaborate with every year.

Meow Wolf’s past, which really looks like the future

The collective debuted its first permanent immersive experience, House of Eternal Return, in Santa Fe, New Mexico, in 2016. There, visitors walk through what appears to be an ordinary Victorian house, but nothing is what it seems. Step into the refrigerator or open the dryer in the laundry room and you enter another psychedelic dimension.

A dark hallway lined with neon trees, a pastel room of geometric designs that trick the eye, a fantastical glowing forest — the immersive exhibition unfolds choose-your-own-adventure style with over 70 rooms of colorful maximalist art made possible by hundreds of artists, creators and volunteers. “Game of Thrones” creator George R. R. Martin is among House of Eternal Return’s supporters.

Meow Wolf opened its second permanent installation, Omega Mart, in Las Vegas in February. Like its flagship Santa Fe location, visitors explore a supermarket wherein hidden doors and other entrances transport them to another mystifying world. You can even buy bizarre products like Mammoth Chunks and Organic Moth Milk and discover a hidden bar called Datamosh.

A Meow Wolf character explores the past in the Library, part of Denver’s Convergence Station.

Part of Meow Wolf’s mission as a registered public benefit corporation is to support artists and build community, which includes investing in the communities it comes to. In addition to collaborating with local Colorado artists for Convergence Station, the group is partnering with other arts organizations like the Latino Cultural Arts Center “to be a part of a supportive network of arts organizations throughout the city of Denver,” Everett said.

“They really wanted to incorporate the local artists, that was something they were really trying to make happen,” said David Ocelotl Garcia, a local Colorado artist involved in the installation. “Not just bring artists from around the world, but to really embrace the local artists as best as they could and offer this opportunity, which I thought was really cool to do.”

Garcia collaborated with fellow Colorado-based artist Cal Duran for one of the room installations, called “Earth Spirits of the Subconscious Mind,” which presents dozens of sculpted ceramic heads protruding from the walls.

They both wanted to honor Indigenous and Mexican heritage, with the heads referencing the ancestors in these cultures. The heads have mirrors in the eyes, prompting viewers to reflect on their own identities and ancestors, according to Duran.

“I really wanted it to be imaginative and kind of otherworldly,” Duran said. “When people get into our room, I want them to feel like they’re in another realm.”

Corn is a reoccurring motif in the room, representing sustenance, balance and strength in the Indigenous Mexican tradition, according to Garcia. To enhance the experience, he also recorded a mix of instruments like flutes, drums and a conch shell, along with other sounds recorded from nature, to play in the room for visitors.

“I created Earth Spirits to honor my family, my ancestors and my community, as well as to bring awareness and respect for all living things,” Garcia said.

The collective is carving out its niche of large-scale immersive art experiences, and Everett is excited to see what its future looks like — though it’s safe to assume it will be colorful and chaotic.

“Meow Wolf began as a group of young artists exploring ways to express their unique vision outside of the traditional gallery system,” Everett said. “And now that we’ve found a way to create a successful model for our kind of installation art and artist community collaboration, we are excited to showcase and support our fellow artists in communities around the world.”

Daftar Situs Slot88 Gacor Gampang Jackpot Terbesar
Actor Linda Collins Turning Heads Around Hollywood and Beyond
Deborah Lee Fong Surging Despite the Pandemic
“Panic” EP by Australian Mary Broadcast
The One and Only Dici, is at it Again