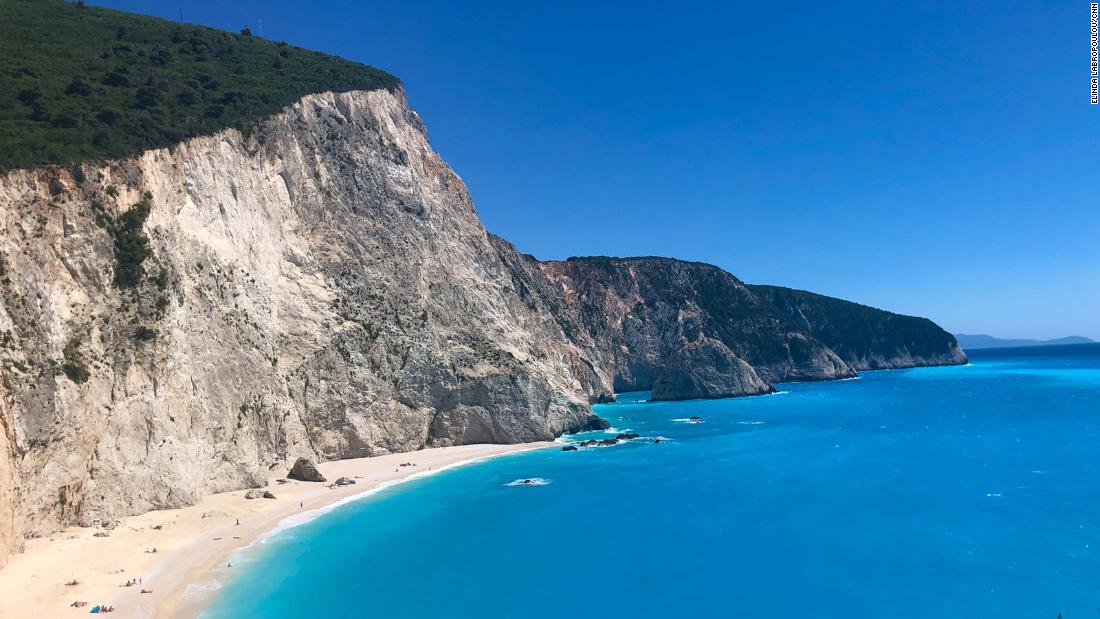 (CNN) — They’ve both got beaches, food, history and sunshine, but two leading tourist destinations are now selling themselves as Europe’s safest as they try to lure the visitors they need to prop up economies fried by the coronavirus.

Both Portugal and Greece, which this week opened their doors wider to international visitors, are trumpeting relatively low infection rates and widespread measures to keep the virus in check.

And both face financial peril unless they can persuade the tourists to come.

Portuguese Prime Minister António Costa believes his country remains as attractive as ever, but has launched a new campaign highlighting its safety. “All the reasons to visit Portugal are still here so tourists are welcome,” he tells CNN.

Portugal has one of Europe’s lowest death tolls from Covid-19 — 1,520 fatalities among a population of fewer than 11 million — and the government hopes its handling of the pandemic will help the country beat out other nations as it tries to convince would-be travelers to visit.

“We are among the countries that tested the most, we’re one of the countries that better knows the real spread of the virus, where the numbers are the safest and where people can come with confidence,” Costa says proudly. “Confidence will be one of the differentiating factors at the moment of choosing where to go on holidays — I think that Portugal is a good destination.”

His comments are mirrored by his counterpart in Greece, Kyriakos Mitsotakis, who says his country’s top priority is safety as this week it opens seasonal hotels to visitors from across Europe.

The Pasteis de Belem store is selling only 20% of its usual number of custard tarts.

In Portugal, part of the efforts to build up that confidence has been the introduction of hygiene certification to designate tourist facilities as “clean and safe.”

“We’ve created a protocol between the health authorities, all the hotels, to create a special seal, clean and safe, to give everyone guarantees so that they can come and they’ll be safe,” Costa says. Some 14,000 businesses have received the seal and 15,000 employees have been trained, officials say.

Although the prime minister admits the numbers won’t be as good as in previous years, Costa says there are good indicators that occupancy rates will be at robust levels.

It’s still early in the summer season, but both countries are off to a slow start.

Lisbon’s old town neighborhood of Alfama — usually packed with tourists on a sunny day — is still quiet. The area, vacated by many residents over the past decade due to the gentrification that saw many buildings turned into tourist accommodation, is only just beginning to open up restaurants, shops and cafes closed during the height of the virus.

“We were forced to close our store for about two months, the last time we closed was in 1977,” says Miguel Clarinha, an owner and manager of Pasteis de Belem, a Lisbon institution that sells the country’s famous Pasteis de Nata custard tarts.

“We’re hopeful of course but we also know this year is going to be a slow year,” he says.

Among the few travelers to be seen, Christine Benna, 48, an office administrator from Germany says she felt it was safe enough to visit.

“We planned it before [the pandemic],” she says. “We were waiting until the last minute to see if it was possible to fly or not and it was possible, so we said ‘let’s go.'”

Benna and her partner spent most of their two weeks in Portugal outside of Lisbon, visiting friends in the countryside, limiting their time in the Portuguese capital to one day.

“We didn’t want to postpone because who knows how things will be in a couple of months, probably the situation will be rather worse,” she says, admitting that probably this will be the couple’s only trip outside of Germany this year.

While many might have been put off by the current situation and tried to get a refund or change the dates of their trip, the couple felt confident enough getting on a plane.

“We had an FFP2 mask during the entire flight so that we are safe,” says Benna’s partner Rainer Dreiling, 52, a cancer researcher from Germany. “In open areas it’s not very dangerous, only in small spaces, in rooms or something, so we’re not scared about it.”

A survey by Hotelaria de Portugal, an association that represents 65% of hotels in the country, does show that people like Benna and Dreiling are indeed planning their holidays in Portugal but optimism levels do not match those of the prime minister Costa.

Because of that, a majority of hotels will only be operating at full capacity from September and a large portion will have to remain at a reduced capacity until the end of the year. It’s a grim outlook, especially for a country where tourism alone represents 14.6% of GDP.

“Until there’s a vaccine there’ll be a virus,” Prime Minister Costa says. “Initially we only had one way of protecting ourselves — it was to lock ourselves at home — now we know more and we know how to live with the virus in safety.

Porto Katsiki on the island of Lefkas is still relatively empty for the time of year.

It’s a similar picture in Greece where about 90% of tourism revenue comes from international visitors. The country will be lucky to see anywhere near the 33 million visitors, bringing an estimated $20 billion, that it received in 2019.

But while beautiful shorelines like rugged Porto Katsiki on the Ionian island of Lefkas — regularly featured on global best beaches lists — are currently crowd-free, they’re expected to get busier as Greece begins the gradual opening of its borders.

With considerably fewer virus fatalities than Portugal, Greece is being hailed as one of the safest countries for holidaymakers in the Mediterranean this summer. It’s seen under 200 deaths from Covid-19 and a little over 3,000 cases in a population of 11 million.

Greece’s opening is gradual, starting with a bridge period until June 30, during which international passenger flights will only be allowed to enter Greece via its two main airports in Athens and Thessaloniki.

Direct international flights to the country’s many tourism destinations will resume as of July 1. Ferries from other countries will also be permitted to dock from July.

The opening means that passengers from a list of dozens of countries with low infection rates can now enter Greece, subject to random tests. The list is expected to be extended by July.

Those arriving from airports that are on a “black list” of high transmission areas compiled by the EU’s Aviation Safety Agency (EASA) have to test and must quarantine overnight pending results.

Even if the results are negative, travelers arriving from high risk areas will have to self-quarantine for a week at their arrival destination. Those who test positive will be quarantined for up to 14 days.

The normally busy resort town of Parga started out the season completely empty.

Greece hopes its early success in the fight against the virus will translate into receipts, in an industry that accounts for more than 20% of the country’s GDP and one in four jobs.

As in Portugal, strict health and safety protocols have been introduced. Hotels are required to have a contracted physician on call while employees must have to take regular tests.

At popular destinations “Covid-19 rooms,” or in some cases designated hotels, have been set aside to quarantine anyone testing positive for the virus.

Hoteliers in Lefkas say the vast majority of questions from potential clients are about health and safety.

“People want to travel but they want to make sure they minimize exposure. They want to know that once they arrive at their final destination they will have space to social distance and feel safe,” says Odysseas Christofides, owner of the Pavezzo Country Retreat.

Christofides estimates bookings to have dropped by 60% since this time last year. “We also have a lot of guests with valid bookings who don’t know if they will need to cancel last minute because of travel restrictions and uncertainty about flights. It is a one step at a time year for all of us.”

North of Lefkas, in the resort town of Parga the beach has just been cleaned and sunbeds put in place. Parga receives tens of thousands of visitors annually, mostly from Europe’s north. This year it started out completely empty for the first time since the hotels were first built in the 1950s, locals say. With preparations visibly underway, they express concern about the summer ahead.

“Bookings show that many people will not travel this summer. Many clients have already moved their bookings to next year,” says Antonis Zygouris manager of Parga travel agency ITS Travel. “But if the first ones who come have a great time and return home safe things could pick up.”

With annual visitor numbers more than doubling since 2010 and increasing reliance on the tourism industry, Greece knows that despite its early success the country’s economy is going to suffer. The government has said that more than half of this year’s tourism revenue is already lost.

Tourism has only just managed to help Greece begin to emerge from a 10-year financial crisis, but it now looks as if that same industry’s woes will now send the country’s economy spiraling downward again.

To try to bolster the sector, Greece’s government has presented an extensive plan including an improved health infrastructure.

This includes the installation of nearly 450 beds for Covid-19 cases on popular islands and the hiring of nearly 700 additional staff. Eleven airplanes have also been transformed into futuristic-looking “transit capsules” that can be used for patients needing to be airlifted to intensive care units.

With many challenges still ahead, Greece’s Prime Minister Kyriakos Mitsotakis says the coming months will be “a different summer.”

His Portuguese counterpart, António Costa, is in agreement.

“We will have to live with the virus for a very long time,” he says. “Does that transform our lives? Yes. Does that impede our lives? No. It requires us to live differently.”