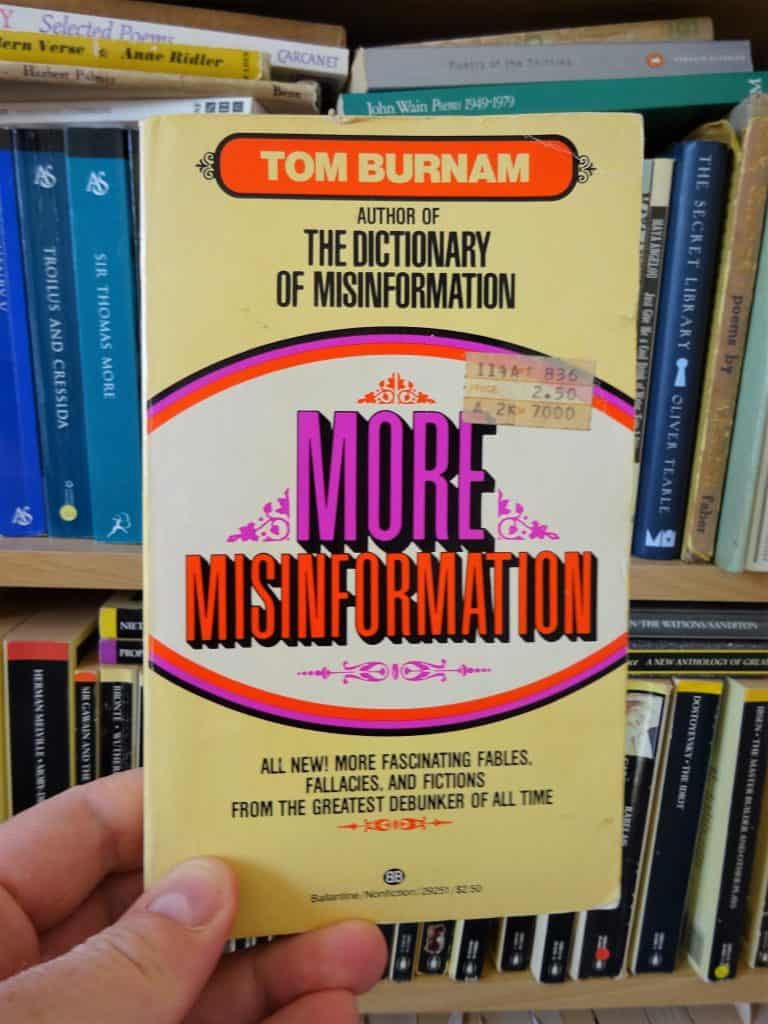 Last year, I reviewed a fascinating book, The dictionary of misinformation

, written by a professor of English named Tom Burnam and published in 1975. Although it’s now out of print, you can pick up a second-hand copy of it online for a few quid (my copy cost me less than £2.50 including postage). And I’d strongly recommend doing so.

Recently, I’ve been enjoying the follow-up book, , which Burnam published in 1980. Once again, the book is a romp through the alphabet, picking up on misattributed phrases, popular misconceptions, and other famous inaccuracies. For instance, ponder the following facts.

Jonah wasn’t swallowed by a whale. Lemmings don’t commit mass suicide in a death march. Koalas aren’t bears. Rabelais didn’t create the character of Gargantua. The Japanese drink sake isn’t a ‘rice wine’. The Russians didn’t invent vodka. Nero didn’t fiddle while Rome burned. There is no such place as ‘New York City’ or, for that matter, ‘Mexico City’.

And do you know the name for a Roman soldier’s wages? It begins with an ‘s’. And no, it isn’t ‘salary’.

The book which gave its name to this weekly Friday blog column, The Secret Library: A Book-Lovers’ Journey Through Curiosities of History, was my attempt to collect together some of the most interesting misconceptions I had discovered in the world of books. Burnam’s The dictionary of misinformation and More Misinformation

both have a similar aim, although, like the BBC TV show QI, it sets its sights not just on the world of literature but on the world as a whole.

In this follow-up book to The dictionary of misinformation, we learn, among many other fascinating things, that a certain four-letter

derogatory racial term formerly used widely in America was actually first applied to white people rather than African Americans: members of the Whig party, which had a raccoon as its emblem, were thus called from 1839, although by the end of the century the term had been applied to black Americans.

Travelling further back in time, Burnam informs us that the Colosseum was not so called because of its size, but because a colossal statue of the emperor Nero was erected nearby; at any rate, the name ‘Colosseum’ came later, and the structure was initially known as the Flavian Amphitheatre, after the patrilinear name of the Roman emperors. It is also more likely, based on historical records, that Christians were martyred at the nearby Circus Maximus than at the Colosseum (where they almost certainly were never thrown to the lions). The Circus Maximus is much older than the Colosseum, and considerably larger, thought to have accommodated over 250,000 people, compared with the 50,000 or so in the Colosseum (sorry, Flavian Amphitheatre).

And did you know that Charles Boycott, the nineteenth-century gent for a wealthy English absentee landlord in Ireland, gave his name to the practice of ‘boycotting’ something not because he engaged in such a practice himself, but that he was the object of boycotts, when the Irish tenants refused to have any dealings with him?

is not without its own occasional pieces of misinformation: in a variation of Muphry’s Law (sic), any book that sets out to correct misconceptions or common errors must inevitably fall prey to the occasional error itself. So, for instance, Burnam states that Dracula is killed by a stake through the heart in Stoker’s novel, when in fact it’s a Bowie knife (and even then that’s only what finishes him off: Jonathan Harker had already mortally wounded him by slicing his throat open). And technically, the statue of ‘Eros’ in Piccadilly Circus in London was intended to be ‘Anteros’ (i.e. the anti-Eros, representing pure, non-erotic love), a fact which Burnam might have mentioned alongside the statue’s common name, the Angel of Christian Charity.

Jonah was not swallowed by a whale: according to the King James Bible, he ended up in the belly of a ‘big fish’, which technically would rule out whales (which are mammals rather than fish). Although Roman soldiers were paid a salary (from the Latin for ‘salt’), they weren’t literally paid in salt: instead, their salary or salarium was an allowance or ration, which might have included salt (and other food), but wasn’t their actually wage. Instead, their wage for fighting was a stipend, or stipendium. The Russians simply stole vodka off Poland, which is the nation that can lay claim to inventing the drink.

And on the subject of food, I was intrigued to learn that the famous dish Steak Tartare, which has nothing to do with the Tartars, was invented by Jules Verne in his novel Michael Strogoff.

is well worth a read if you find a copy going cheap online somewhere second-hand.

Oliver Tearle is the author of The Secret Library: A Book-Lovers’ Journey Through Curiosities of History

Ophelia Records Takeover North Coast Festival’s Spotify for Special Melodic Playlist
How do people in Asia-Pacific feel about travel right now? It depends on where they live
India reportedly cracks down on cheap Chinese phones
Calvin Harris Finally Releases Sequel To ‘Funk Wav Bounces’ With 13 New Mega-Star Collabs
19 Of The Best Cardigans For Men To Keep You Warm And In-Style (2022 Edition)