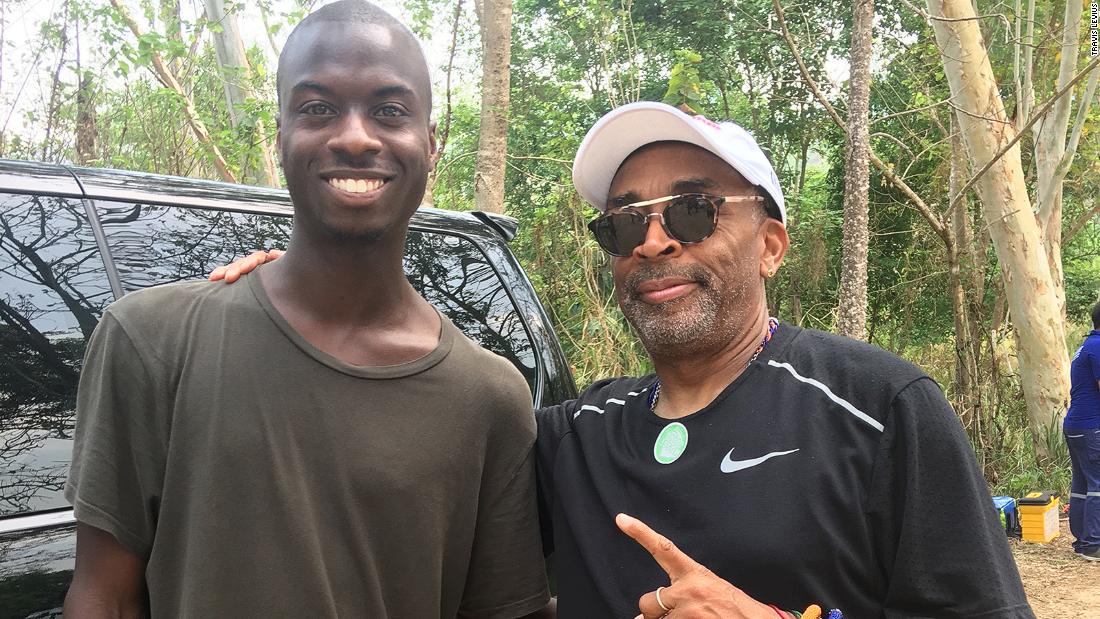 (CNN) — If someone would have told me that I would travel to Thailand in the spring of 2019 and leave three months later having worked on a Spike Lee film with “Black Panther” star Chadwick Boseman, I would’ve cackled at the absurdity.

I’d like to think travelers experience some degree of luck on their journeys — benign encounters with locals, free room upgrades, an empty plane row in economy — but my “right place, right time” experience in Chiang Mai sounds literally unbelievable. (Thank goodness I have pictures with the Oscar-winning director himself to prove it.)

As a luxury travel writer by trade, I was invited to Thailand for a four-day group press trip out of London.

The assignment: fly on a private jet from Bangkok to Phuket, set sail on two private megayachts and take shelter in five-star beach resorts (movie stars aren’t the only ones with dream jobs).

One would think that this would’ve been the ultimate “pinch-me-I-must-be-dreaming” highlight of my Thailand visit, but life had tremendous tricks up its sleeve.

I arranged to remain in the country for an additional month on a personal trip, which would have meant experiencing Thailand in a much different financial bracket.

However, I was in the middle of reviewing a plush Phuket resort when I glanced at the Facebook group I’d just joined for black travelers in southeast Asia.

The founder, Lawrence “Binkey” Tolefree, posted a video exclaiming: “Spike Lee’s coming to Chiang Mai soon and is looking for folks for his movie!”

I initially thought it was a scam.

Thankfully, I came to my senses and dwelled on the wondrous opportunity at hand.

Lee’s movies have been a cultural staple for millions of Black American families such as my own, spanning decades.

In Brooklyn, around the time I learned to walk, my mom owned VHS tapes of his films. Getting to meet and possibly work with this legend was too good to pass up.

I followed my gut and canceled my second night at the resort, bought a one-way plane ticket and booked a $10/night Airbnb room in Chiang Mai. The very next day I flew into the city to make it in time for the Lee casting meet-and-greet.

About 100 or so black travelers and expats came to the private casting event and met the dynamic “BlacKkKlansman” director.

“There’re so many Negroes on this side of Thailand,” Lee said to the crowd, eliciting great laughter. “It’s a beautiful sight.”

He donned a pink button-down shirt with “Boycott Sal’s” written across the chest — a reference to the Brooklyn pizzeria in a certain 1989 hit film of his.

His energy was cool and approachable. During my turn to meet him, I told him I was originally from Brooklyn and his eyes and demeanor lit up immediately.

He later explained to us that “Da 5 Bloods,” though Vietnam War-themed, would mainly be shot in Chiang Mai. Nothing would be produced on American soil, though a crucial scene needed to depict Black Americans in America — and that’s where we came in.

“Not all you black folks will be in the muthaf**in movie…but you got a picture!” he joked to our group.

To my relief, I received an email days later from the casting team confirming my place as a film extra for that group scene. I was thrilled!

I received another email later that week: casting also wanted me to be a stand-in for one of the actors, but didn’t say for whom.

I searched the term and found out it’s essentially the off-camera version of a body double for lighting/camera placement then put two and two together: I was standing in for Chadwick Boseman.

It took me a while to lift my jaw off the floor that day.

When Lee’s team calls, you answer — and extend your stay for two additional months in Thailand.

My first day on set — inside an international school classroom — was as an extra among many other lucky people. We were giddy even at 5:30 a.m. when we were called to set, as it would be the only chance most of us would have to appear in a Hollywood movie, let alone be directed by a cinema icon for a day.

The remaining working days had me standing in for Boseman, alongside four stand-in men representing the other “Da 5 Bloods” veterans. For multiple dates throughout April, I became the off-camera version of “Norman,” the fallen squad leader, and this is where the real filming adventures began.

Life as a stand-in in Thailand was… hot. No comfy, air-conditioned studio sets for Boseman’s scenes, which meant all my shooting days took place in the sweltering Thai heat, which often reached 33 C (90 F) before 10 a.m.

While standing in for Boseman, Levius had to dangle out of a raised, simulated helicopter.

We shot in multiple locations outside of Chiang Mai in the jungles of Northern Thailand, including the Mork Fa Waterfall area of Doi Suthep National Park and the alluring Chiang Dao region, lined with precipitous limestone peaks.

Most of production involved 4:30 a.m. call-times and 12-plus hour days with no cloud cover, constantly swatting flying insects from our faces while trying to create a war film classic. I now know first-hand that movie making is far from glamorous, no matter how gorgeous the setting.

But my goodness was it exciting.

One day I’m near a gurgling forest stream nervously taking direction from Lee on where to stand; the next day I’m gripping a massive rubber gun while dangling half-way out of a raised, simulated helicopter with the entire production’s eyes towards me.

I certainly never had these experiences on my fancy writing assignments.

Prior to securing his once-in-a-lifetime gig, travel writer Travis Levius was roughing it at Anantara’s Layan Residences in Phuket.

It was surreal to see the actors I’ve watched on television (Norm Lewis and Clarke Peters playing “Eddie” and “Otis,” respectively) and in movies (longtime Lee actor Delroy Lindo as MAGA hat-wearing “Paul” and film phenom Chadwick Boseman) live in the flesh thousands of miles away from the States.

I enjoyed witnessing the organized chaos of production: The wardrobe unit handing us our army uniforms for the day; the “guessing” game on when you’re going to be called (more like yelled at) onto a scene to help a superstar do his job seamlessly; the frequent shouts of “Rolling! Quiet on the Set! Action! Cut!”; darting for the tented lunchtime buffet to fuel on spicy noodles and Thai iced tea with my fellow stand-ins and other crew members; and watching Lee at work, witnessing just how passionate and raw he is about creating his art and getting it right.

I never got a chance to get a picture with Boseman, but the photo I have with Lee, snapped near my final day on set, is the only memento I need from that once-in-a-lifetime experience.

Personally, mind-blowing life events such as these feel like more than random occurrences. I’m of the belief that we can, to an extent, create our own luck and set the tone for serendipity to fall on our lap.

Even without concrete answers, trusting our gut at the right time often leads us to do the right thing.

Texture Talk: Meet the Photography Duo Helping Black Youth Love the Skin They’re In
Looking for an offbeat European holiday? This island has its own rules, language and vodka
Black Thought Shoots Down Being An “Underrated” Rapper
O2 data shows Londoners are returning to the office
American Airlines agrees to buy 20 supersonic planes from Boom