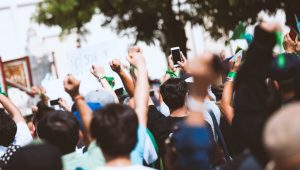 The general public is angry with authority today and it appears Amazon is attempting to capitalise on this sentiment with a shallow PR stunt.

Earlier this week, IBM made a very powerful statement. It would indefinitely halt the development and commercialisation of all facial recognition technologies. The dangers of this technology are too great, therefore it would wait for legislative action. Big Blue has seemingly put societal responsibility ahead of commercial gain and should be applauded.

Amazon has attempted to claim some of the same praise with its own announcement, but it is not the same. It leaves more questions than answers and appears to a shallow attempt to gain favour in the courts of public opinion without making a material sacrifice.

This is the cynical view on this announcement, but it is difficult to have any other stance when the company does not answer simple and direct questions.

Firstly, what has Amazon actually said? The statement is as follows:

We’re implementing a one-year moratorium on police use of Amazon’s facial recognition technology. We will continue to allow organizations like Thorn, the International Center for Missing and Exploited Children, and Marinus Analytics to use Amazon Rekognition to help rescue human trafficking victims and reunite missing children with their families.

We’ve advocated that governments should put in place stronger regulations to govern the ethical use of facial recognition technology, and in recent days, Congress appears ready to take on this challenge. We hope this one-year moratorium might give Congress enough time to implement appropriate rules, and we stand ready to help if requested.

After reading this statement, Telecoms.com had a few questions:

In response to these enquiries, Amazon pointed Telecoms.com back to the original statement, claiming there is sufficient information already available.

The issue is that there is not enough information.

If some existing relationships are being honoured by Amazon, would it not be fair to presume the majority, if not all, are? Does this mean the work with the Immigration and Customs Enforcement (ICE) in the US will continue? Is this not the sort of implementation the one-year moratorium is supposed to be protecting the general public from?

Another question which has been raised is whether this year long moratorium would be extended should Congress not get its ducks lined in a row. 12 months seems like a long time, but in politics issues can be pushed around the aisles without actually being addressed for decades. Should we get to June 2021 and nothing has been accomplished, Amazon has made no indication whether it would continue to hold back its controversial technology.

It is also curious that if Amazon has been campaigning for stronger regulations to govern this segment, why did it enter commercial relationships with organisations where there is little transparency or accountability? It seems the Amazon moral compass can be sent bananas with a big enough cheque.

Ultimately this is another case of corporate opportunism, a cheap attempt from a business which already divides opinion to get on the good side of the general public.

Jeff Bezos and Amazon have consistently been criticised of poor ethics and principles with the way employees are treated, therefore the sudden discovery of a conscience is a very curios development. It should surprise no-one that there is very little depth to this promise, a paper-thin commitment which will perhaps be forgotten once the 12-month shot clock counts down to zero.

Aside from the shallow attempt to curry favour with the general public, the other significant takeaway from this announcement is whether Congress can pass any meaningful regulation or legislation by June 2021.

For a bill to be enacted into law there is a pretty long-winded procedure. Firstly, the bill has to be written by a politician, then there is the shoulder-rubbing process of getting sponsors and supporters, before being introduced. At this point it is sent to one of the sitting committees who review, research, and revise the bill before voting on whether or not to send the bill back to the House floor. Should the bill get back to the House floor, it is then debated and voted on.

However, at any point the bill could be scrapped and sent back to the first step, such is the bipartisan nature of politics today. Should a Democrat introduce a bill, the likelihood is that the Republican party will oppose it (and vice-versa). Considering the House of Representatives is a Democrat majority and the Senate is a Republican majority, the bill could be ping-ponging everywhere for a considerable period of time.

For a bill to be conceived, fine-tuned, navigate its way through both political chambers and be signed into law by the President, without receiving any legal or lobby challenges on the way, in a 12-month period, pretty much everything would have to function perfectly.

The smart money would be on nothing changing. The cynic would suggest this topic would be forgotten before too long and Amazon will be able to return to business as usual in 12-months.

Holiday Fun at the Balboa Bay Resort in Newport Beach
Taproot to Reunite for First Time in 10 Years at 2023 Festival
BLAKELOGANX Isn’t Afraid of Coloring Out Of The Lines : New Moves and Music
Can operators really save an extra 10% in the RAN?
Britney Spears Praises Sister Jamie Lynn in Birthday Post