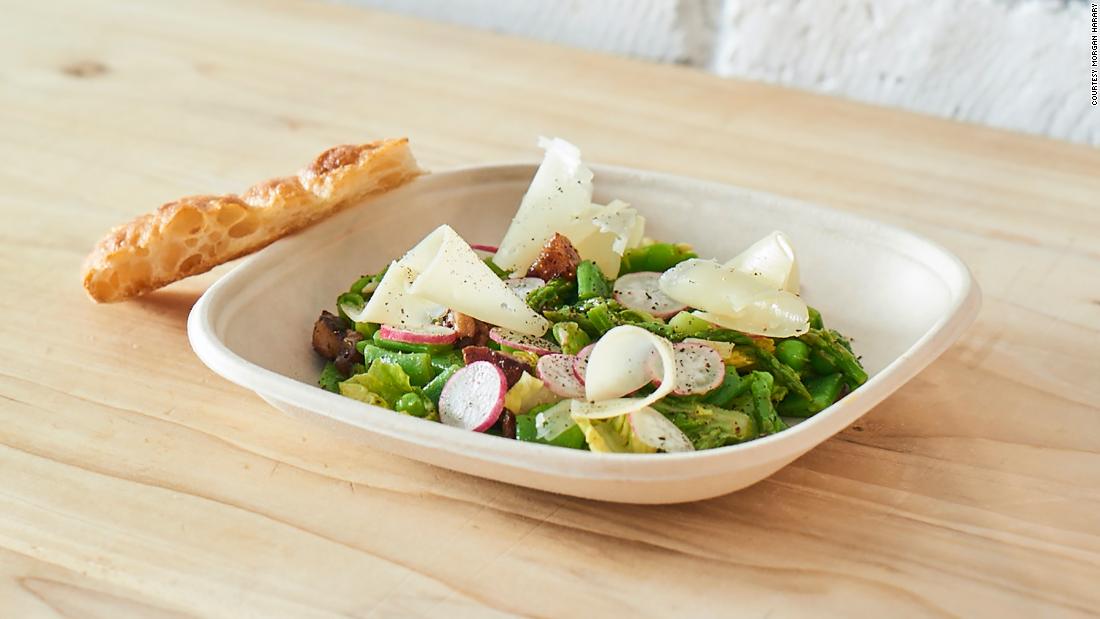 But this isn’t how Palmetto or a smattering of other restaurants around the world expected to be operating in the spring of 2020.

Modified menus, a bare-bones staff and the seemingly gargantuan task of attracting business in a time of such grave uncertainty are all factors in a new food and beverage operation.

“It may not be ideal,” says Lilly W. Jan, a lecturer in food and beverage management at Cornell’s School of Hotel Administration, but she wouldn’t call it “crazy.”

When Interstellar in Santa Monica, California, is able to seat diners, it will only be permitted to seat five people, though the space can hold up to 26.

From Montreal and Calgary to Denver and New York City and all the way to London, a small number of full-service restaurants, cafes and fast-casual joints are navigating unfamiliar waters.

It’s probably an understatement to say that the hurdles facing new business ventures at this time is significant, and these obstacles are not withstanding typical service kinks and communication difficulties between back of house and front of house staff — standard in a launch.

Palmetto, which has space to seat about 100 people, will indeed face a whole new host of challenges when the time comes for on-site dining.

“We’re working out the kinks, but there’s going to be a thousand more, when we open up for real,” Aivaliotis says.

The absence of expected opening struggles does not mean things at Palmetto have been seamless since the opening.

This is hardly surprising, given Palmetto’s intended focus.

Says Jan, “If it is an operation that was intending to focus solely on dine-in options, having to pivot to a takeout and/or delivery service model (even temporarily) will be challenging.”

Palmetto in Oakland, California, does a prime rib dinner every Wednesday night.

Housed in a building across from the historic Fox Theater, Palmetto was conceived as an upscale option for concertgoers. Instead, with live music venues also closed, it’s offering its “steakhouse-style” menu to go. Delivery is available on a limited basis.

Business hasn’t been great, admits Aivaliotis, in spite of the early enthusiasm around Aivaliotis and his partner’s other spot, The Kon-Tiki Room, known for its tiki drinks.

It’s a tough business in normal times, says Aivaliotis who is open to experimentation until things normalize: “We’re toying with ideas about changing the menu, and maybe doing some less expensive options, and opening earlier, and we’re trying to figure out the path forward.”

On the opposite coast in New York City, Italian newcomer Forsythia debuted a three-course, $30 menu (for $5 more, there’s dessert) on June 1.

The restaurant concept, Forsythia at Home, represents a pared-down version of what would have been served on site if not for Covid-19.

Scarpinocc, a type of ravioli-shaped pasta, is handmade by Forsythia’s Jacob Siwak.

The Stanton Street location, which was supposed to welcome on-site diners in late May or early June, has taken on an altered form as a meal-kit restaurant service operating out of baking school space in the East Village, the neighborhood adjacent to the planned Lower East Side spot.

Creative thinking paired with a desire to “get up and running as quickly as we could” led Jacob Siwak along with sous chef Mark Coleman and baker Brian Maxwell to launch the three and four-course meal kits, which do require some prep at home before being ready to eat.

“We make it really simple for the guest at home,” Siwak promises.

For New Yorkers craving a little excitement during this unusual time, they can rest assured, the menu is changing weekly. Delivery will be an option soon, too.

Housemade focaccia served with mortadella, a cured pork, was a first-course offering during Forsythia’s first week of business.

Up north in Montreal, Canada, business at Ayla, a Mediterranean restaurant that opened on May 21, has been strong even though opening in this limited take away and delivery capacity required a major pivot.

“We had to adapt our business model to be suited for delivery, that included changing the menu to dishes that traveled better, [finding] the right eco-friendly packaging and [preparing] the necessary marketing to attract customers,” restauranteur David Dayan explained in an email to CNN Travel.

Ayla, in Montreal, may be the first new dining spot to hit the scene since the pandemic shuttered businesses and kept people at home.

Dayan believes Ayla is the first new spot to hit Montreal’s reputable food scene since the pandemic, and he guesses they’ve been busy in part because of their newness. “People are attracted to anything new since they have been quarantined for so long,” he says.

“The fact that we own a few other popular restaurants (Ryu sushi, Café Livia) helped a lot because we were able to do some cross-promotion in the form of flyers, social media and email campaigns,” Dayan adds.

Having a name in the industry may be useful, but Jan points out that creative marketing efforts might be required to drum up business if the public isn’t aware of the opening.

While many at home have enhanced their cocktail game and flexed their long-dormant baking muscles in the weeks and months following the lockdown, not everyone can make a punch for two starring clarified milk at home. Not everyone can make focaccia or sliders bursting with flavors redolent of India.

Not everyone wants to.

Aivaliotis spent many years behind the bar mixing cocktails, but he says even he can’t make a clarified milk punch to stand up to the likes of his bar manager, Jeanie Grant.

The average cocktail lover may learn how to make a serviceable Manhattan at home, but odds are Palmetto’s Floral Depot Punch, made with the aforementioned, hard-to-replicate-at-home clarified milk, lime, hibiscus, tropical fruit and Caribbean spice, will be a lot harder to recreate.

A heightened interest in bread, however, is something Maxwell, the man doing all of Forsythia’s baking, has considered in his approach to the meal kit’s bread offering.

“We also definitely focused on breads that we think might be a little bit more difficult or might need a more specialized piece of equipment than a home baker could do by themselves,” Maxwell tells CNN.

“It’s almost ironic because in my mind, the gluten-free movement and the anti-bread movement was at an all time high [pre-Covid], but on the flip side of that, it’s pretty clear that bread is a very comforting thing to eat, either on a daily or weekly basis.”

Rob Crnkovic owns Indie Counter Culture in Calgary and says business has been good from the start, thanks to a supportive community.

Indie Counter Culture, a fast-casual joint that opened in Calgary on May 15, is in the process of getting a liquor license to introduce beer and wine as to-go or dine-in options.

Calgary reintroduced socially distant on-site dining on May 25, but owner Rob Crnkovic says so far, “people still are quite nervous about being in closer proximity to other people that they don’t know. And that scares people off. So it’s not that they’re not ordering, they’re just not staying. They’re just taking their food to go.”

Crnkovic, who hopes to franchise his brand, calls the concept fresh, saying it’s “super urban, super hip, with really legit Indian food.” The sliders, no matter what the filling, are “super sexy,” according to Crnkovic.

The Calgary native is self-taught and has never traveled to India but promises he’s a “food guy,” who knows his way around a kitchen and has employed an “awesome team.”

Adapting with the times

While Indie Counter Culture’s early success is perhaps due in large part to its functionality as a takeout spot upon initial conception, it is possible for other restaurants, forced to pivot, to find a degree of success as well.

In Santa Monica, husband and wife team Angie and Daniel Kim waited several weeks before making the decision to open their cafe Interstellar in a capacity they hadn’t planned before Covid-19.

More than a coffee shop, Interstellar in Santa Monica, California, worked on a menu that would translate well to take out before opening to the public.

A major hurdle was in refiguring the menu and ensuring that items on offer would travel well. In an email to CNN Travel, Angie explains: “While we did plan to have some grab-and-go items like coffee, pastries and sandwiches, takeaway and delivery was not a big focus for us in our initial opening plan.”

Interstellar’s location, typically heavy with foot traffic, was also something with which the Kims had to contend.

To help combat a lack of expected foot traffic and walk-ins peckish for a bite or in need of a caffeine hit, Angie says they “reworked the menu to offer weekly specials and created items that would hold up during the delivery process.

They also came up with a few packages-slash-DIY kits that people could assemble themselves at home. For example, they have a DIY affogato kit that includes a pint of gelato, freshly ground or whole coffee beans and a coffee mug.

“At the end of the day,” says Jan, “[the success of a new food and beverage spot] all depends on the type of operation, the location, and its concept — which are the same factors for a crowded market with or without Covid.”