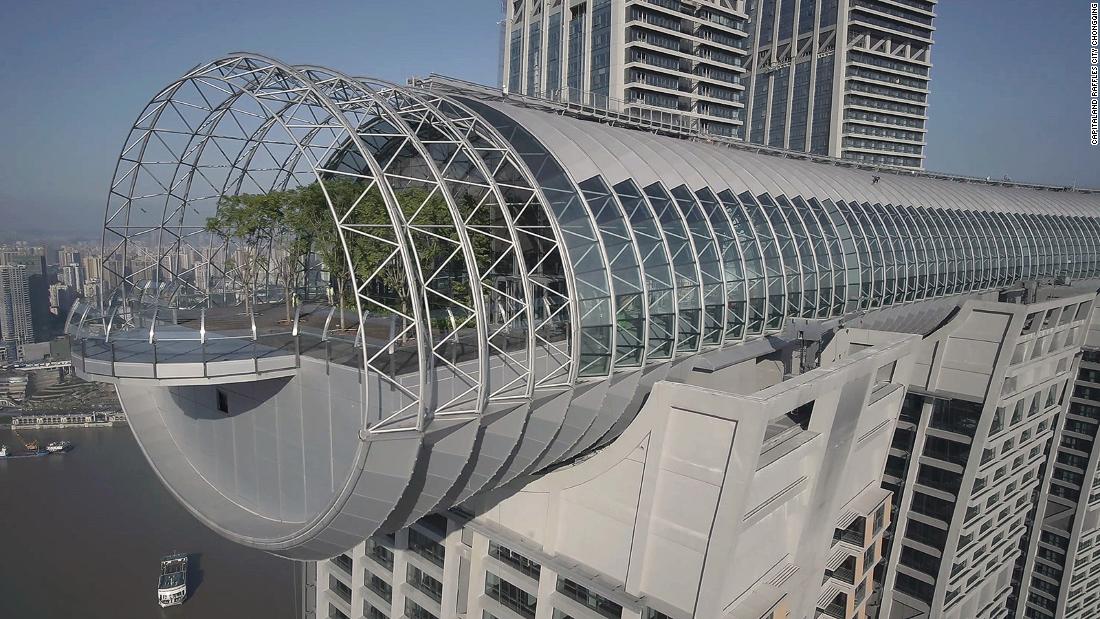 (CNN) — It’s easy to see why “The Crystal” is one of the most highly anticipated new attractions in China.

Designed by Moshe Safdie, the mastermind behind Singapore’s awe-inspiring Changi Jewel, the 250-meter-tall sky bridge is the highest of its kind.
Dubbed a horizontal skyscraper, it stretches 350 meters across six of the eight skyscrapers that make up Raffles City Chongqing, a multi-use riverside complex in the southwest China megacity.

The Crystal recently unveiled its first attraction to the public: The Exploration Deck.

The 300-meter-long sky bridge, called The Crystal, connects six of the eight skyscrapers that make up the Raffles City Chongqing complex.

“The Exploration Deck is the first major attraction to launch in Chongqing since the lifting of the country’s nationwide lockdown and the public’s enthusiastic response is yet another encouraging sign of recovery in consumer sentiment,” says Lucas Loh, president of the CapitaLand Group in China.

As a crowd control measure to prevent the spread of Covid-19, a daily visitor quota of 3,000 has been implemented. Each visitor will be allotted a time slot to regulate the crowds.

On opening weekend in late May, almost all available tickets were sold out.

“All visitors to the Exploration Deck are required to wear masks and have their temperatures taken,” a CapitaLand spokesperson tells CNN Travel.

“Hand sanitizers are provided at each of the touchscreen panels and frequent sanitizing is carried out at areas with higher touch points — lifts and interactive panels, for example.”

A mini-museum, a park and a glass-bottom deck

The Crystal, the sky bridge connecting six of the eight skyscrapers in the complex, features a glass-bottom viewing deck.

The Exploration Deck, spanning over 1,500 square meters, is more than just a viewing platform.

Raffles City Chongqing teamed up with National Geographic to create an exploration-themed exhibition.

“In collaboration with National Geographic, the exhibition brings to life space exploration through five multi-dimensional exhibition zones at the Exploration Deck on Level 47, and showcases how mankind is making life possible on Mars,” says the spokesperson.

The first part of the five-part exhibition, on level 1, outlines Chongqing’s history and development.

After taking a space-inspired express lift, visitors go on to the Mars exhibition on level 47.

The Exploration Deck guides visitors from the ground floor to the outdoor viewing deck through a five-part exhibition.

At the end of the tour, visitors will arrive at an indoor park and an open-air glass-bottom viewing deck that offers panoramic views of the fast-developing Chinese city and the Yangtze River.

Yet to be opened, the rest of The Crystal sky bridge will be home to The Private Club, a members-only clubhouse, as well as The Sky Garden, a food and beverage destination.

The 6,000-square-meter Sky Garden will house “six restaurants and bars with different dining concepts.” It’s expected to open to the public in the third quarter of 2020.

The Crystal, when fully open, will house about 120 trees that will grow up to nine meters tall.

The highly anticipated rooftop pools, however, will be located in the private clubhouse.