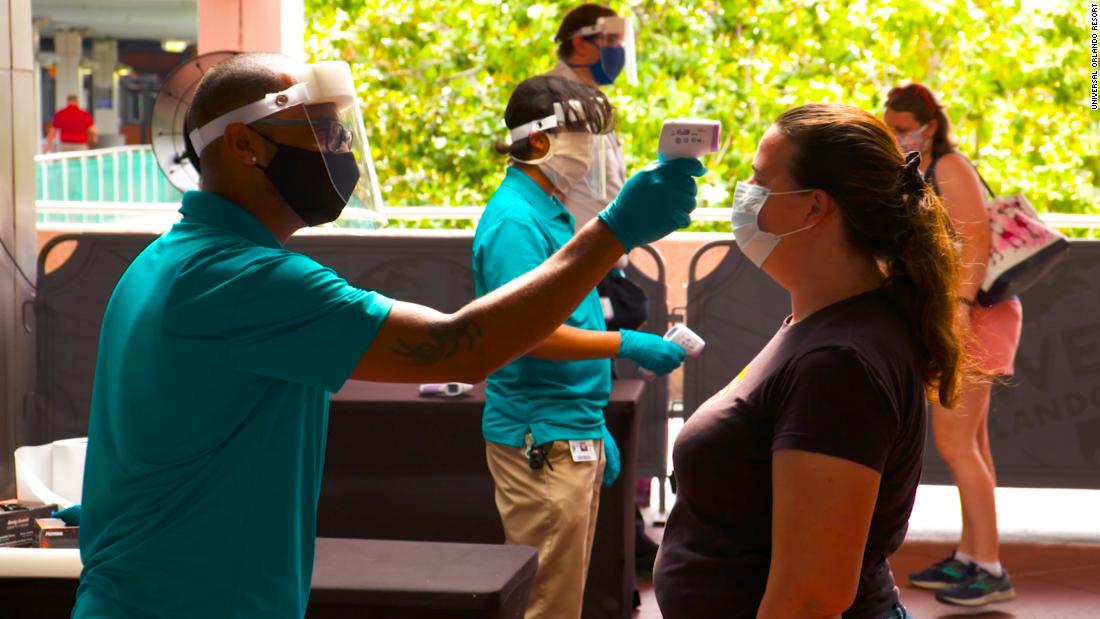 Travel
Share on Facebook
Share on Twitter
Share on Pinterest
Share on LinkedIn
And just as Disneyland Shanghai in China did before it in May, Universal put limits on how many people were allowed in along with numerous coronavirus safety measures.
These reopenings show landscapes of lightly attended parks and could illustrate the challenges that lie ahead this summer for other amusement and theme parks. (That includes SeaWorld in Orlando on June 11 and Walt Disney World Resort on July 11 with the Magic Kingdom and Animal Kingdom.)
After all, amusement and theme parks are built to pack in the crowds. Resetting an amusement park to adhere to social distancing needs during the pandemic is no small task.

And while some folks might be ready to don a mask and get going, others might still be skittish.

The big question: Are people going return during the pandemic?

Will the Universal experience be universal?

In an email statement late Monday afternoon, Universal Orlando said “while we don’t share numbers on our park attendance … we were able to put in practice the measures we have been planning: screening our guests and team members, social distancing, requiring facial coverings, limiting capacity at our parks and attractions and increasing our cleaning and disinfection procedures.”

Craig Williams, producer of The DIS Unplugged, attended opening day on June 5. He said he was surprised at what he saw.
“The reopening day was one of the slowest days I’ve ever seen at Universal Orlando since I’ve been attending,” Williams told CNN Travel.

Williams has been visiting since 2011 and could typically be found in major Orlando theme parks two or three days a week before the pandemic in peak season.

Universal Orlando Resort in Florida reopened to the public on Friday. Guests had to get their temperatures checked before entering the resort.

He arrived around 11:30 a.m. to avoid the early crowd and said he was surprised to see no lines for parking, temperature checks or security checks.

“I was expecting a bigger crowd. I am used to seeing big crowds for new attractions, so I thought something like the reopening of a theme park would have created the same excitement.

“There was definitely the idea it was going to be very busy, but it didn’t live up to that at all.”

Williams said he went to June 3 soft reopen for passholders that was “significantly” busier the reopening day for the general public.

He said he didn’t revisit on Saturday or Sunday but said the accounts he’s heard point to smaller crowds.

And “my sister there’s today [Monday], and she said the crowd level is pretty small.”

Williams speculated that with so much international flying still restricted, the numbers could also reflect mostly locals or people who didn’t have to drive too far to go.

Space to distance for now

After months of shutdown, Shanghai Disneyland is the first Disney theme park to reopen since the Covid-19 outbreak prompted closures around the world. CNN’s David Culver reports.
Richard Kerr also reported light crowds at Universal in his report for The Points Guy travel website .

“Once in the actual ride line, social distancing was constantly enforced and queues with relatively few people in them looked much larger than they really were,” he wrote.

“Today was a very light crowd day as a bit of a soft open, so I see simply having enough space to queue people up as becoming a problem unless park capacity is severely limited.”

Williams pointed out while he was surprised at the seemingly low attendance, he was a good side to it.

“Honestly, it seemed from a guest perspective to be the best-case scenario — no one knew how big it was going to be,” he said.

But “you don’t want to feel crowded around a lot of people” with so many health concerns remaining.

Signs could be pointing to a slow return to amusement parks.

Along with Universal’s low crowds so far, DIS Unplugged conducted a Facebook poll before last month’s opening of Walt Disney World’s shopping, entertainment and dining complex, Disney Springs. It also showed signs of a still-cautious public back in May.

In the poll asking 2,426 people their plans regarding Disney Springs, 32% of respondents said they planned to go. Some 51% said they were glad to hear of the reopening but planned to stay home. And 17% said it was simply too soon to reopen.

Scenes from the park

During the June 5 reopening at Universal, stage masked performers kept a careful distance from each other if performing without one. And audiences were well away from the staging areas.

Hogsmeade, a Harry Potter-themed area in the Islands of Adventure, proved popular, and there were definitely groups of people packed closer than six feet apart in footage captured by The Dis blog at wdwinfo.com.

Williams said this was one of areas with bottlenecks, and the crowds were not able to distance as well at those. “But that’s not the majority of the park by any means,” he said.

Roller coasters such as the Incredible Hulk went out with half-filled green trains and water rides carried same-household parties to maintain social distancing during the thrill ride.

In his Points Guy report, Kerr said some kinks still needed to be ironed out, including a 30-minute restaurant wait when he had already placed a mobile order.

One of the people there for the first day was Dr. Channing Willoughby, who lives near Myrtle Beach, South Carolina.

While wearing his mask, he told CNN: “I felt that they really had a good handle on safety. I’m a physician, so I keep up on what’s happening in the world. And in terms of preventative measures, I thought Universal was ahead of the curve, so I felt very safe bringing my family here.”

Members of an extended family from Georgia and Texas told CNN they were on vacation in Florida already and found out about Universal reopening, so they came for their first visit ever.

Their logic? Since no guests had been there for months, reopening day would actually be the best time to visit, rather than waiting for larger crowds later.