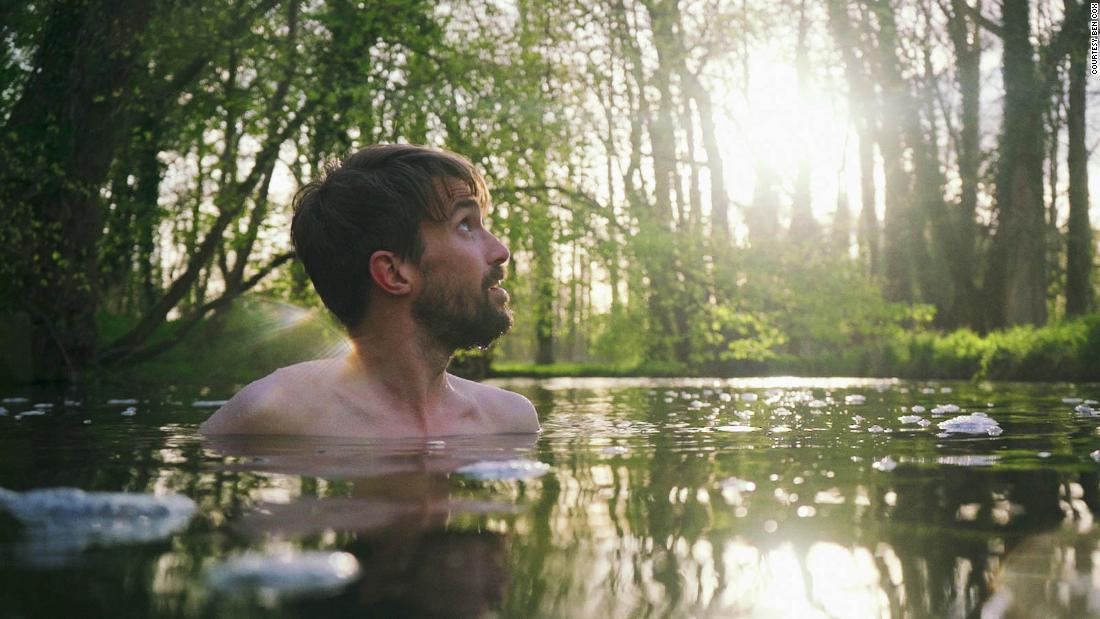 (CNN) — Preparing to jump out of the second-floor window and into the river below, I felt the acute sense that my anxiety was about to be washed away.

It was a balmy July day in perhaps the most quintessential of English locations, a mill house on the River Avon.

There was the burble of the cricket on the radio. Plates of sandwiches were spread across picnic blankets on the bank, where a crowd was egging me on to follow the two friends who’d already made the leap.

I started to count down from three and jumped on two.

I closed my eyes and felt my legs whirl before feeling the crash of the water as I smashed through the surface. I emerged gasping, my hair slick across my face, and let out a huge cheer. For that moment, I had forgotten everything I was ever worried about.

I settled into a steady breast stroke and swam off upstream.

Joe Minihane says wild swimming makes him able to face up to his anxieties.

I had come to the Avon as part of a mission to find an end to the acute anxiety that had plagued me ever since I was a teenager.

I was retracing the wild swimming journey of the late English naturalist, filmmaker and eccentric Roger Deakin, who had written about his trip in his classic nature book “Waterlog.” Deakin loved breaking the rules, doing things his way. Above all, he loved swimming in rivers, lakes, ponds and the sea.

I had started swimming aimless loops of London’s Hampstead Mixed Pond at the behest of my then girlfriend, now wife, who had suggested we visit the famous bathing spot on a brutally hot summer afternoon.

I immediately adored the bucolic surroundings of the pond, with its ramshackle changing area and murky green water which rarely topped 20 C.

I loved the sense of doing something that seemed “out there,” but more so I couldn’t get enough of the sense of contentment and calm I felt while I was in the pond and in the hours after I got out.

The cold water had an addictive power and kept drawing me back in.

What I didn’t understand at the time was that I was suffering from anxiety. I thought it was normal to be worried all of the time about the end of the world, about the unknowable future, about if I lived up to what my friends supposedly thought of me, about whether I was living life “right.”

I was unhappily working as a freelance technology journalist and considered myself to be a complete failure. And as I spent most of my time working alone at home, it was easy to slip into unhelpful thought patterns and develop a narrative around myself that was deeply unhealthy.

My anxiety, I now know, had tipped me toward depression.

Yet while wild swimming in the pond, I found peace. So I started devouring books on the subject. In search of something to do beyond my work, I alighted on the idea of retracing Roger Deakin’s book. It would be a way to satisfy my urge to travel with the need to deal with my anxiety.

The water provided so much.

It gave me an identity beyond my work, which I had grown to hate. I started documenting my swims, writing about each dip and taking pictures. I made new friends who also loved wild swimming, which made me feel less isolated. It also gave me a connection to nature that I had struggled to feel living in one of the world’s most hectic cities.

Unlike walking or cycling, swimming in wild water puts you in the scene. You have, as Deakin put it, a frog’s eye view. In the water I was able to swim alongside Great Crested Grebes, watch carp come to the surface for a gulp of air and look out for kingfishers darting from low branches.

The more I swam, the more at ease I felt.

I’ve since learned that the calm afforded by the water relates to the triggering of my fight or flight system.

Recent studies in the UK have shown that the shock of the water and the ability to stay in, breathe and swim for a few minutes overrides any stress, having an anti-inflammatory effect. Our nervous systems realize that if we can get through this, we can handle other, day-to-day anxieties.

That certainly rang true for me. Emerging from a swim I would feel cool and collected, things I’d been endlessly working over in mind either put into perspective or eased to the point that I could face up to them.

I crisscrossed the UK, swimming with a snorkel over swaying kelp forests in icy bays on the Isles of Scilly, jumping out of that mill house window on the River Avon, descending into potholes and swimming underground in the Yorkshire Dales and stepping back in time at England’s last river swimming club in the village of Farleigh Hungerford.

When he wasn’t swimming, the anxieties returned.

Yet when I wasn’t swimming, my anxiety was still flaring badly.

Things came to a head when I had a bike accident and broke my wrist. Stranded on dry land, I began to spiral. I didn’t know what I was worried about, merely that I was extremely anxious and in a state of high alert all of the time. After much soul searching, I finally sought the professional help of a therapist.

When the cast came off my wrist and I was able to swim again, I had a new-found appreciation of the water, as well as new coping techniques to deal with my anxiety when I couldn’t swim. Breathing exercises. Meditation. Yoga. Being open with friends and family about how I felt.

Ready to dive in

I continued to swim in Roger Deakin’s wake, in quiet rivers in the flat Cambridgeshire Fens, where kestrels hovered and dipped above me, up in Jura in the Inner Hebrides, where George Orwell wrote “1984,” and into the crashing waves of the North Sea under the shadow of the medieval Bamburgh Castle.

I felt lighter and more comfortable with myself than I ever had. And I had wild swimming to thank.

As the years passed, I wrote a book, called “Floating,” about my experience and I left London behind to be closer to the sea in Brighton.

Today, my home faces out across the English Channel, where I swim throughout the year, come rain or shine, summer or winter.

The people I met on the journey and swam with shared their stories of how the water improved their mental wellbeing too. I even wound up meeting a filmmaker who made a short film based on the book.

It’s no exaggeration to say that wild swimming around the UK saved me from myself and made me into the person I am today.

Now I make sure to always have a towel and shorts with me, ready to dive in whenever the mood takes me.