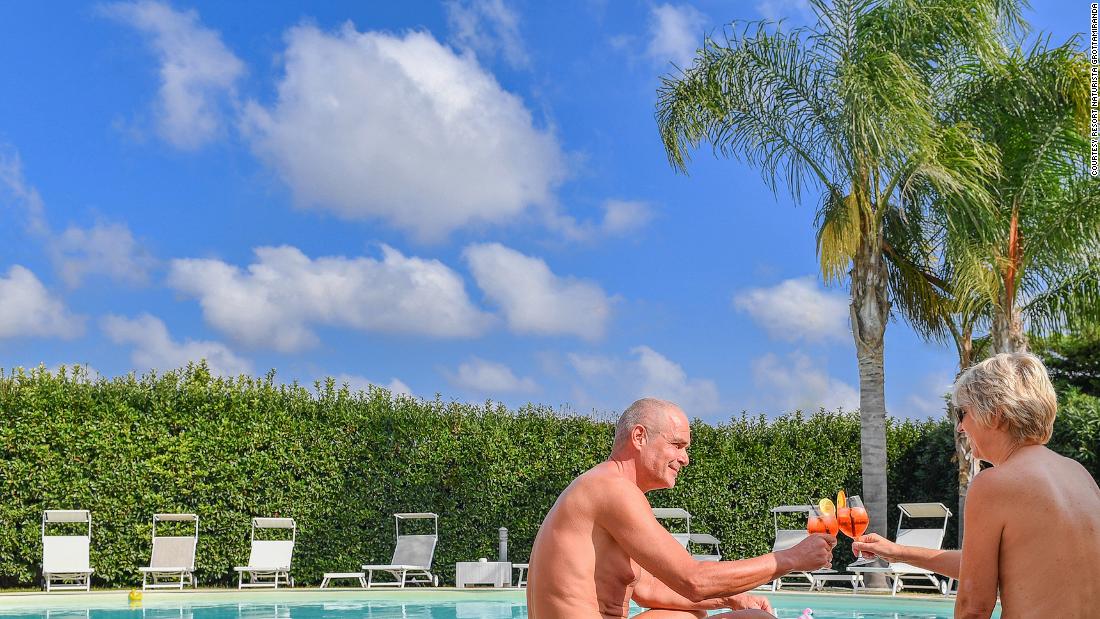 (CNN) — On an average weekday, you might find Parisian Laurent Luft enjoying a swim at the city’s Roger Le Gall swim center.

Like many of us, Luft’s currently missing his laps in the pool, which is closed due to the coronavirus pandemic and France’s lockdown rules.

But unlike many of us, Luft usually swims in the nude.

During lockdown, Luft and the Parisian naturist community have gone virtual, establishing nude yoga and cooking classes on YouTube.

“It doesn’t really make up for the real face-to-face contact that we are used to, but it’s something to keep the association alive,” Luft tells CNN Travel.

Naturists believe that embracing a clothing-optional lifestyle allows people to be more liberated and to free themselves from the constraints of society.

Right now, due to shelter-in-place orders and lockdown restrictions, many people are spending a lot of time at home, and many have found themselves rethinking their attitudes to work, leisure and lifestyle.

British Naturism‘s commercial manager Andrew Welch tells CNN Travel there’s been a rise in naturism in Britain over the course of the UK’s lockdown.

He suggests that, for some, deciding not to wear clothing could be the natural next step to spending all day in your PJs or your sweats, no longer required to wear smart office wear.

Welch also connects this uptake to the shift to a slower pace of life and a growing appreciation of the sights and sounds of nature. Plus, Welch reckons that the naturist community’s pivot towards the virtual world has allowed more people to connect with like-minded individuals from across the country — and the globe.

Luft says he’s seen a similar shift in Paris: “People have been following our videos [and] sent emails saying, ‘You’ve inspired us to give it a go.'”

“When you’re feeling confined and closed in and imprisoned, if at least you can take off your clothes that is some way to free yourself a little,” he adds. “So, even in our tiny little Parisian apartments with no gardens and sometimes no balcony or anything, we still have that possibility.”

But while naturism may be gaining some new followers, both naturists say that a big part of the movement’s appeal is embracing nudity en masse.

For naturists, replicating that feeling online is tough — as is the realization that heading off to a nudist resort for a vacation is unlikely to happen for many this summer.

“When you are naked with other people, you are already showing yourself physically, there’s nothing to hide, no disguise,” Luft says. “And so, you tend to be more open, develop deeper relationships, and you talk more openly.”

With travel largely curtailed, vacation resorts across the world have been impacted by cancellations and complications.

Naturist resorts are, in some ways, no different — many naturist travelers and fully clothed travelers alike are being forced to cancel holidays and business owners are balancing the financial implications.

But naturist resort owners suggest that their resorts could bounce back quicker than average, because they offer something specific and attract fiercely loyal clientele.

Certainly, the naturist travelers who spoke to CNN said they’re keen to book a vacation as soon as they can.

“Naturism is something that you can do in your own house — of course you can — but actually, it’s much more about the fresh air and the sense of sunshine and the breeze on your skin. I think people will be craving those opportunities to go and do that within our community,” says Welch.

“There’s nothing like opening the door of your tent one morning or your caravan and just stepping out into the sunshine with nothing on, it really is the most wonderful feeling.”

Right now, the couple are in France and unable to travel to their resort, but they hope to return in June and reopen.

They expect their summer clientele will be largely local visitors — customers from the UK and elsewhere in Europe may struggle to visit this summer due to continued travel restrictions, mandatory quarantines and Covid-19 fears.

“Our clientele is really very loyal,” she says, adding that many who canceled summer trips in February and March have rescheduled for the fall of 2021.

“You make some very genuine friendships that just don’t seem to happen in the clothed world,” says Parisian naturist president Luft, speaking about his trips to naturist resorts.

“I feel that every year when we go on a naturist holiday, we always meet some really interesting people that we just wouldn’t meet anywhere else.”

The communal dining table at Skinny Dippers Mallorca will be out of action this summer.

In Spain, Skinny Dippers Mallorca is a group of self-catered naturist apartments and a boutique hotel run by Brit Grant Hodges and his Spanish partner.

Hodges says he also has a loyal band of customers, some guests have visited every year since they opened back in 2006. He’s confident the resort’ll bounce back.

“We have a massive number of very loyal guests who continually repeat bookings, who are just sitting waiting for a flight,” Hodges tell CNN Travel.

Both Hodge and Dutray say they’re currently busy making plans for how to reopen safely, with social distancing measures in place and complying with local restrictions and rules.

“There’s nothing like opening the door of your tent one morning or your caravan and just stepping out into the sunshine with nothing on, it really is the most wonderful feeling.”

“We have a large communal table of 24 people, and we have a dinner party every night, and that can’t happen this year, but people will come along and have separate tables, and we’ll work it out,” says Hodges.

The resort, he says, is very spacious, which will help — he’s also confident guests will be very respectful, as he stresses that they always are.

Dutray, meanwhile, disputes the idea that being nude might create more hygiene issues — pointing out that naturists are used to placing towels down on seats or sun loungers before they sit down.

In Paris, Luft is in communication with the Paris town hall to discuss how to relaunch activities on a more localized level. The level of chlorine in the water means that the Parisian nudists might be able to swim in the buff before too long, although water aerobics might prove trickier due to social distancing, says Luft, and the gym also poses some potential problems.

“Some people will not like that,” he says. “Within naturist circles, you’ve got the thing that people, they do want to be totally naked and the mask is a covering. But this isn’t an item of clothing, it’s about health and safety.”

Luft says he takes his leadership role seriously, and aims to ensure anyone attending one of ANP’s gatherings — virtually or in person — feels safe and respected.

Luft says that the story was “a little bit or even a lot exaggerated” but says the incident was still a learning curve — the outcome was that people developed “zero tolerance” for any misbehavior.

“So, if someone came along who would wander around for a while fully dressed, people would start telling them like, you know, you can either take your clothes off or go somewhere else. Whereas before they were too embarrassed to talk to the person.”

At the beginning of lockdown, Luft was concerned there might be some incidences of individuals behaving inappropriately at online exercise classes, but he says that’s not been the case.

“All of these people have been coming to genuinely have a good workout and that’s all. [There’s been] been absolutely no negative connotation at all. It’s all been really fantastic, so it does show that that people do understand what we’re about.”

Welch says British Naturism’s online activities will continue, even as the UK lockdown eases. He’s also excited about a sea change in opinions on naturism. The rise in nudism during lockdown has only added to that, he says.

Luft agrees, he believes misconceptions about naturism have largely dissipated.

He’s certain online hangouts will continue, but he’s also counting down the days until he can organize naturist vacations again.

“I really am sure that by next year, people will be back in the swing of taking their holidays again,” says Luft.

“I don’t see things changing, because online events can’t replace the sunshine and the feeling of sand between your toes.”