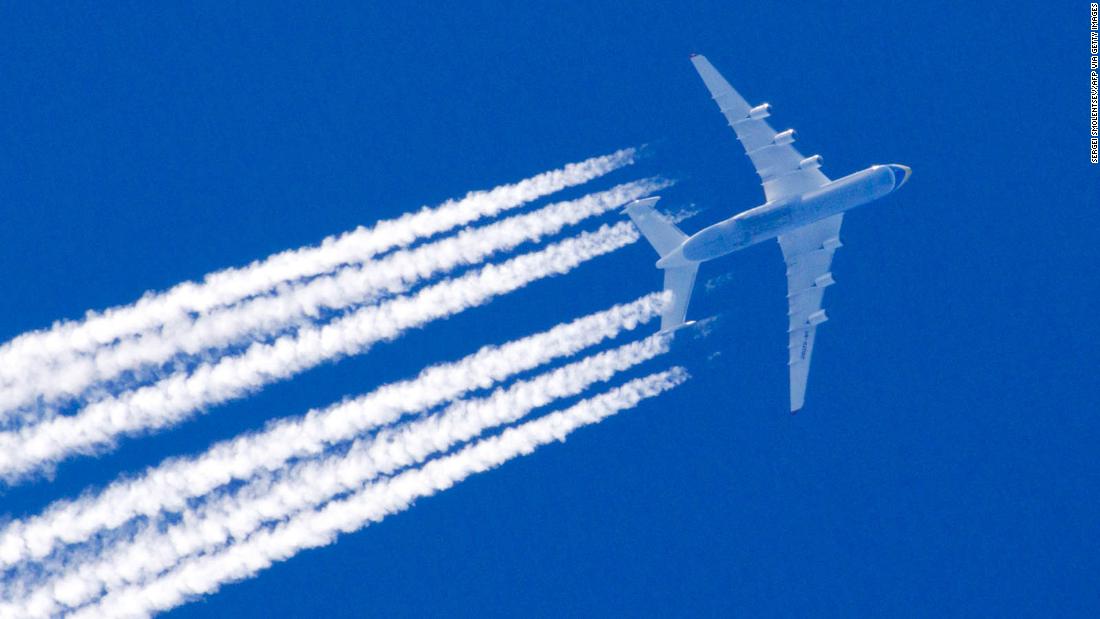 (CNN) — Billions around the world are staying home, confined to their neighborhoods by the coronavirus pandemic.

But as we walk those quiet streets on the way to the grocery store or getting some essential exercise, the silence is still broken by the intermittent distant hum of a jet engine in the skies above.

Where are these planes going, who is on them, and why?

Chances are that any airplane you spot right now is carrying hitherto stranded nationals on their way home (yes, there are still many repatriation flights throughout May), or medics, heading towards Covid-19 hotspots. The other main reason for planes in the sky is cargo flights, brimming with food, medicines, and personal protective equipment (PPE).

“It would be irresponsible at the moment to be promoting non-essential travel,” says Abby Penston, CEO of UK-based travel consortium Focus Travel Partnership. However, as lockdown continues, “We’re starting to see that technology has a place, but it’s not the be-all and end-all. People need to travel, people need to meet, people need to connect.”

As measures are implemented at airports to detect potentially unwell passengers pre-flight, and steps are taken on board to curb transmission of the virus amongst passengers and crew, some airlines are operating skeleton services to facilitate essential travel, gradually scaling up as we head towards summer.

Here’s what air travel is looking like right now and in the coming months: Which airlines are flying where, why and how.

By any metric, airline network activity is a fraction of what it was this time last year.

On May 9, the United States’ Transport Security Administration clocked just 170,000 passengers — down 1.8 million from 2019. In Europe, budget airline Ryanair says it expects to operate less than 1% of its scheduled flying program this quarter. And Australia’s Qantas Group states that it’s currently operating around 5% of its pre-crisis domestic passenger network and about 1% of its international routes.

Because of the fact that most passenger planes are grounded — and they usually carry food and other revenue-generating cargo, in addition to your suitcases — there’s a significant global shortage of freight-carrying capacity. Therefore, what appear to be passenger planes flying in the sky are often actually airliners that have been adapted for carrying essential supplies and PPE.

Lufthansa Group, for example, says that against this backdrop of canceled passenger flights, many of its passenger aircraft are now used exclusively for freight, including Lufthansa’s converted A330s and A350s and Austrian Airlines’ B777s and two B767s.

SWISS is considering removing economy seating on four of its Boeing 777s to bolster cargo capacity and, at Austrian Airlines, two 777s are being reconfigured into “Prachters” (passenger planes turned cargo aircraft).

In Tokyo, All Nippon Airways (ANA) is flying masks, hazmat suits and test kits on its passenger seats and in overhead compartments on its Shanghai-Haneda flights, allowing the airline to carry around 1.4 times more cargo.

When international borders started locking down in March, airlines soon canceled flights to mitigate the spread of Covid-19. Millions of holidaymakers and business travelers found themselves trapped abroad.

Most of the repatriation flights took place in March and April, but as some borders are only now opening up, such flights are still ongoing through May and June, as restrictions slowly ease.

The most high-profile of these operations this month is Air India, which is poised to repatriate thousands of Indian nationals on 64 flights as part of the country’s global Vande Bharat mission, planned by the Indian government.

United Airlines is running its second repatriation flight of the month from Belize City on May 14 and airBaltic put on flights in mid-May for entrepreneurs needing to fly employees between Latvia and Amsterdam. Qantas flights scheduled through May and into June will help its customers get home and facilitate essential travel connecting Los Angeles with Melbourne and Brisbane, and London with Melbourne and Perth.

Since April, Delta Airlines has allowed medics to fly free of charge to hard-hit areas of the United States. 350 people have booked flights to nearly 30 states and two Canadian provinces.

In an unrelated initiative in Thailand, medical staff traveling between May 15 to July 31 on Bangkok Airways are eligible for a 20% discount off normal airfares upon presentation of valid medical ID at the check-in counter.

Luring passengers back into the skies

Airlines, such as KLM, are slowly beginning to put flesh on the bones of their skeleton services. In March, the Dutch operator’s flight operations were reduced to less than 10%, but it’s now operating 15% of its original scheduled network.

Some airlines are even planning to address pent-up demand for when travel restrictions are eased.

“Wizz Air is operating at 10% capacity right now,” the airline’s spokesperson tells CNN Travel. “In the UK, Wizz Air has recently resumed flights from its Luton base, to destinations including Budapest, Burgas, Lisbon, Sofia, Tenerife, Tel Aviv and Varna.”

The airline also operates cargo flights from China, mainly to Hungary, to support the containment of Covid-19 by transporting PPE.

Lufthansa craft on a runway at Frankfurt Airport in May 2020.

Worldwide, Lufthansa currently offers 15 weekly long-haul connections: three times a week each from Frankfurt to Newark and Chicago, Sao Paulo, Bangkok and Tokyo. In its new reduced schedule, Lufthansa will be flying from Frankfurt to Athens, Porto and Gothenburg from 18 May onwards and Lufthansa’s domestic flights from Munich will be doubled.

From its Frankfurt and Munich hubs, it now offers a total of 330 weekly connections to cities in Germany and Europe.

Looking ahead to the June timetable Lufthansa Group plans to reactivate 80 aircraft in response to the growing interest of its customers in air travel, as restrictions lift, thereby doubling the amount of planes it will be flying in May.

Operations will adhere to stringent safety measures and social distancing guidelines set by the Ministry of Public Health and the Civil Aviation Authority of Thailand. The airline says that the reopening of airports in Sukhothai and Trat and other routes will be announced later.

At Qatar Airways the focus has been on maintaining flights to over 30 destinations where possible, helping repatriate over one million people and transporting more than 100,000 tonnes of essential medical and aid supplies.

“Throughout this crisis our passengers have been at the center of our focus,” says Akbar Al Baker, the airline’s chief executive. “As we follow the indicators of the global travel market on a daily basis, we continue to focus on our mission — how we can enable mobility for our customers and provide them with seamless connectivity to their final destination.”

The airline says it is planning to grow its network back to over 50 destinations by the end of May, including resumption of services to Manila, Amman and Nairobi.

And by the end of June, Qatar Airways aims to serve 80 destinations, including 23 in Europe, four in the Americas, 20 in the Middle East/Africa and 33 in Asia-Pacific.

In New Zealand, as the country prepares to enter Alert Level 2 (the phase where Covid-19 is contained, but the risk of community transmission remains), Air New Zealand (ANZ) intends to operate around 20% of its usual domestic capacity.

This means reinstatement of flights to Queenstown, Invercargill and Blenheim in the South Island and Rotorua, Gisborne, Palmerston North, New Plymouth, Hamilton, Whangarei and Kerikeri in the north.

“We’ve been keen to start domestic air services as soon as practicably possible to support New Zealand’s economic recovery and connect family, friends and businesses,” says airline boss Greg Foran, “but the ramp up to higher frequencies will be a slow journey.”

And it will come at a price, as the one-meter social distancing of Alert Level 2 means ANZ can only sell just under 50% of seats on a turboprop aircraft and just 65% on its A320s.

“To ensure we cover our operating costs we won’t be able to offer our lowest lead-in fares until social distancing measures are removed,” says Foran.

At Air France, since the outbreak of the Covid-19 epidemic the airline has been adapting its schedules and network, blending repatriation flights with essential passenger services and logistics, especially across French overseas regions.

“At a time where we could have cut ourselves off from the rest of the world we decided to maintain a minimum flight schedule in support of our customers urgently needing to travel as well as helping all those who are stranded around the world and wishing to return home,” said Air France’s Executive VP, Amel Hammouda, during a social media Q&A.

Since March 14 the airline has repatriated over 250,000 people, and continues to serve destinations in Metropolitan France, overseas French regions, and another 35 destinations worldwide — representing less than 5% of Air France’s usual capacity.

“We continue to fly medical equipment, pharmaceutical products and food and bring back a variety of fruit and vegetables,” says Hammouda.

To facilitate this the airline has been deploying a mix of Boeing 777 cargo planes and specially adapted 777 passenger planes where the seats have been fitted with extra straps and netting to accommodate the safe transit of supplies.

As aviation tentatively looks ahead to an era when passenger jets revert to carrying people instead of cargo, the recovery of air travel will depend not just on logistical and economic factors, but also on the inclination of passengers to fly.

That means giving people a sense of assurance that airlines, and the broader air travel ecosystem, are doing their utmost to assure protection from Covid-19 throughout the end-to-end journey.

Focus Travel Partnership’s Penston says now is the time for the wider travel community of airlines, airports, travel management companies, hoteliers, travel tech companies, trade associations and government bodies to sit down and work together in a collective and coordinated manner to get everyone out of this crisis responsibly.

“Embracing the culture of the entire travel community to ensure that we’re all working to the same standards and objectives will help us in coming out the other side of this a lot stronger,” she says.

“Colleagues in and out of the industry say they’re ready to get back to a sensible normality. I think that normality will look different, but I do think that the need to travel and that need to meet has never been more appreciated than it currently is at the moment.”

Prime Video Schedule Additions: New TV & Movies Arriving August 8-14
4 Of The Best Back Shavers From Manual to Electric (2022 Edition)
New York will censor a book about the Attica uprising in its state prisons.
One Piece Film: Red: What We Know About Shanks So Far
Anne Heche Severely Burned After Crashing Car into Home, Igniting Fire