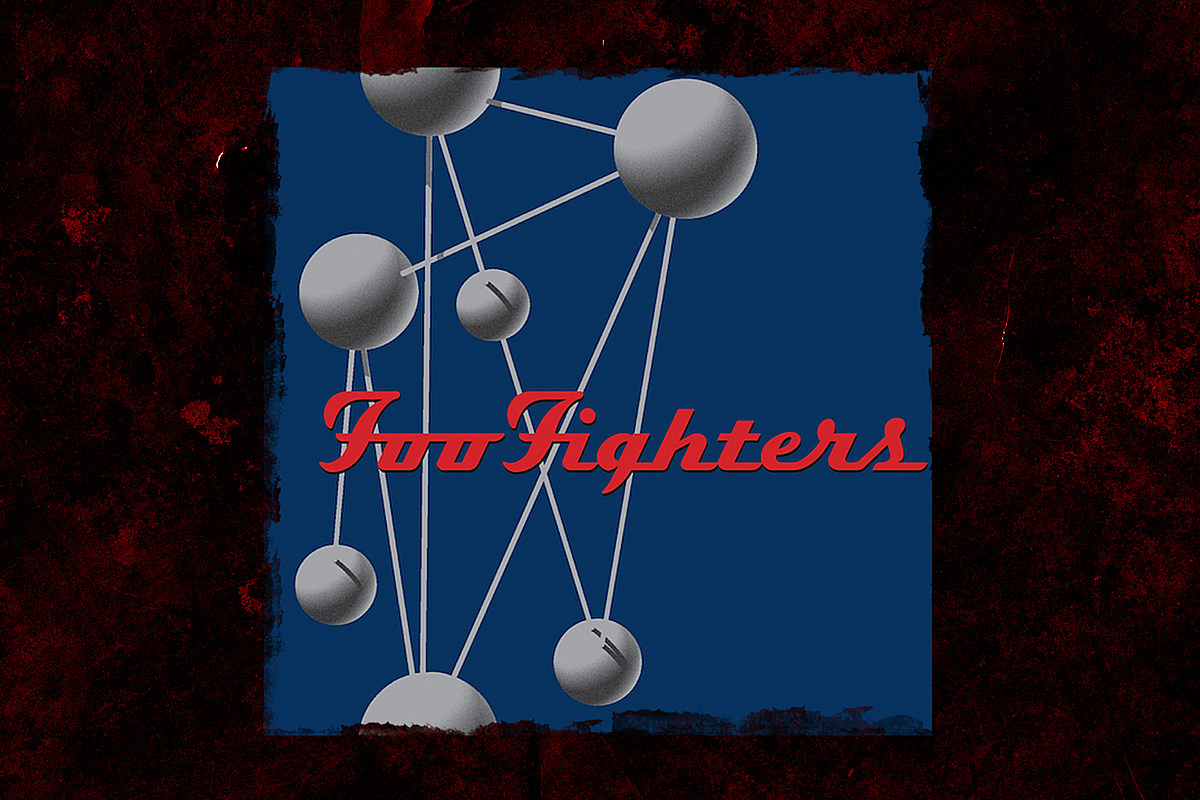 Coming off their self-titled first album, which yielded a number of radio hits, things were looking quite grand for Foo Fighters. However, the fledgling band, led by former Nirvana drummer Dave Grohl, was undergoing a lot of growing pains behind the scenes. But despite the drama, on May 20, 1997, the group released one of their most popular albums to date — The Colour and the Shape.

Foo Fighters began a few years earlier as just a creative pursuit for Grohl. He recorded demos with his friend Barrett Jones in the aftermath of Nirvana’s dissolution and really didn’t expect much. But songs like “This Is a Call,” “I’ll Stick Around” and “Big Me” caught fire and Grohl found himself having to put together a band on the fly to tour in support of the disc.

When that band hit the studio in November 1996, Grohl was going through a divorce, which weighed heavily in the lyrical content. According to Billboard magazine, producer Gil Norton urged Grohl to bare more of himself in the lyrical content. By doing so, the drummer-turned-vocalist began to gain more confidence as time passed. “There was a new freedom,” stated Grohl at the time, stating that he felt like he could actually write about things that he felt strongly about that he wouldn’t normally say in everyday conversation. He added that it felt like going to a weekly visit at the therapist and then feeling pretty good for the rest of the week.

As mentioned earlier, there were also a few growing pains behind the scenes. At first, using that therapy idea, Grohl designed the track listing to feel like a session, splitting the disc between up-tempo tracks and ballads. But the first sessions at Bear Creek Studios did not set well with the singer, who scrapped a lot of the material. He also felt the drum tracks were not to his liking, and began to tinker with drummer William Goldsmith’s recordings. By early ’97, Grohl, bassist Nate Mendel and guitarist Pat Smear found themselves in a Hollywood studio with Goldsmith and after learning that Grohl was re-recording his parts, the drummer got upset and left the group.

By the time all was said and done, Goldsmith received credits on “Doll,” “Up in Arms” and “My Poor Brain.” In reflection, in the band’s Back and Forth documentary, Grohl stated, “There were a lot of reasons it didn’t work out … but there was also a part of me that was like, you know, I don’t know if I’m finished playing the drums yet.” He added, “I wish that I would have handled things differently.” Eventually, the band would recruit Alanis Morisette’s touring drummer, Taylor Hawkins, to fill the void once it came time to tour.

With the album finally completed, it became time to start the promotional effort. In late April of 1997, the group would serve up their first single, “Monkey Wrench.” The song, one of the band’s heavier tracks, was penned with a bit of a bite brought on by the feelings of the dissolution of his marriage. Grohl told Kerrang!, “Yeah, well ‘Monkey Wrench’ is about living with someone and feeling like you’re living in a f—ing cell. A dysfunctional relationship that’s bound to fail. And then I wound up getting a divorce.” According to the singer, the label pushed for “Everlong” to be the lead single, but he wanted something more rocking out of the gate. “We’d just come out of ‘I’ll Stick Around’ and ‘This Is a Call’ and I thought, ‘Let’s give them something upbeat first so that they know our feet are still planted in the same place.’ The first time I heard it on the radio was in the middle of a load of mid-’90’s grunge s–t and I thought it was so killer!” It turns out the gamble paid off. The track reached No. 9 at rock radio and laid the groundwork for the disc.

Grohl, who had been very hands on with the making of the album, also directed the video for “Monkey Wrench,” which featured the band and their doppelgangers going head-to-head. The clip also served to introduce Taylor Hawkins for the first time to fans, even though Grohl played drums on the song.

While the record label bowed to “Monkey Wrench” for the lead single, they eventually saw that their preference was solid. “Everlong” would arrive in August and go on to become one of the biggest songs of the band’s career. The track eventually climbed to No. 4 on the charts, but its legacy easily surpassed its popularity at the time of its release.

Grohl penned the track at a converted barn that had been turned into a studio just outside of Seattle. He was staying in the secluded house at the studio during his separation. During a break in recording, he returned home to Virginia where he completed the track. Speaking with Kerrang, he stated, “I knew it was a cool song, but I didn’t think it would be the one song by which most people recognize the band.” According to the vocalist, he penned the track about a girl he’d fallen for. “It was basically about being connected to someone so much that not only do you love them physically and spiritually, but when you sing along with them, you harmonize perfectly,” said Grohl.

As we know now, the track would have a lasting impact. During a Yahoo! Live concert taping, Grohl would share a story of Bob Dylan asking him to show him the lick. David Letterman, returning to the air after heart surgery, requested Foo Fighters to play the song on his show, introducing it by stating, “Here they are, ladies and gentlemen — my favorite band playing my favorite song — Foo Fighters!” Plus, the track would turn up with a string quartet arrangement during a Friends episode featuring Monica and Chandler’s wedding, in a Daria episode on MTV, and has been used in The Wolf of Wall Street and Little Nicky on the big screen. And the Michel Gondry video also earned the group a Best Rock Video nomination at the 1998 MTV VMAs. Over the years, the band has tinkered with the arrangement, often mixing both the acoustic and electric renditions of the song together in concert.

The album’s third single, “My Hero,” also enjoyed a stellar run. The track, released in early 1998, would become a sing-along live anthem for the band. Speaking about the inspiration for the track, Grohl would state, “Heroes are a funny thing. When I was young I had KISS posters and I listened to Rush and thought the Beatles were magicians. But the real heroes in my life were people that I was close to. Pete Stahl who was the singer of Scream was one. I was 17-years-old when we hit the road and that guy showed me the ropes, so to me he was a hero. And family members …my mom’s a saint. She raised two kids with no money and we managed to be a happy family, so she seems like a hero to me.”

In a separate interview with Headwires, Grohl would add, “My heroes were ordinary people and the people that I have a lot of respect for are just solid everyday people – people you can rely on.”

In a post 9/11 episode, Grohl and Nate Mendel would perform an acoustic version of the song on The Late Late Show With Craig Kilborn. They also donated the track to the Songs for Japan benefit compilation in 2011 after the country’s tsunami and earthquake.

Foo Fighters, “Walking After You”

The album had one final single in it, but the path to radio came about in a rather roundabout way. The group recorded an original version of “Walking After You” in late 1996, but when the opportunity to place the song on a soundtrack for The X-Files came about, Grohl, who was a fan of the show, re-recorded the song with new band additions Franz Stahl and Taylor Hawkins taking part.

And any discussion of The Colour and the Shape should also include a mention of “Hey, Johnny Park,” a track that has frequently turned up in live sets in the years since the album’s release. Though not a major radio hit, the track has remained a live favorite. “That song’s about 15 different things,” admitted Grohl. “The only reason why it’s called ‘Hey, Johnny Park!’ is because when I was young, my best friend was this kid who lived across the street from me called Johnny Park and we were like brothers … I haven’t heard from him since I was about 14-years-old and I thought if I named a song after him, he might call.”

So while there may have been a fair amount of drama during the recording of the disc, it generated great songs. The album was nominated for Best Rock Album at the 1998 Grammy Awards and as of 2012, the disc had gone double-platinum for sales, making it their top-selling disc.

The ‘Guardians of the Galaxy Vol. 3’ Trailer Gets Us Ready for a Big Farewell
Will Smith Grants Trevor Noah His Biggest Post-Slap Interview Yet
Nicholas Hoult in The Menu Shows How Pop Culture Devours Us
6 Best Calvin Klein Colognes For Men: Smell Clean and Fresh 2022
Can operators really save an extra 10% in the RAN?