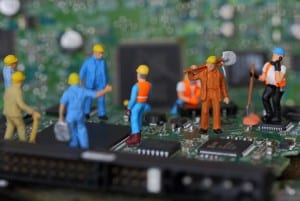 The US move to impose a ban on any US tech being used in the production of Huawei chips has sent shockwaves through the semiconductor industry.

A couple of reports illustrate this well. Bloomberg notes that the Chinese state is pumping $2.25 billion into Semiconductor Manufacturing International Corporation. This will apparently give the Chinese state even more control over the company than it had anyway and is clearly a move designed to accelerate the country’s move towards silicon self-sufficiency, despite the company name.

Meanwhile the Nikkei Asian Review reports that TSMC has stopped taking new orders from Huawei as a direct result of the US ban. This is pretty massive for TSMC as Huawei is one of its biggest customers, so you have to wonder if the decision was influenced by incentives as well as threats from the US.

Huawei, of course, is not impressed with the latest US move against it. Here’s the statement made earlier today at its virtual analyst event in full.

Huawei categorically opposes the amendments made by the US Department of Commerce to its foreign direct product rule that target Huawei specifically.

The US government added Huawei to the Entity List on May 16, 2019 without justification. Since that time, and despite the fact that a number of key industrial and technological elements were made unavailable to us, we have remained committed to complying with all US government rules and regulations. At the same time, we have fulfilled our contractual obligations to customers and suppliers, and have survived and forged ahead against all odds.

Nevertheless, in its relentless pursuit to tighten its stranglehold on our company, the US government has decided to proceed and completely ignore the concerns of many companies and industry associations.

This decision was arbitrary and pernicious, and threatens to undermine the entire industry worldwide. This new rule will impact the expansion, maintenance, and continuous operations of networks worth hundreds of billions of dollars that we have rolled out in more than 170 countries.

It will also impact communications services for the more than 3 billion people who use Huawei products and services worldwide. To attack a leading company from another country, the US government has intentionally turned its back on the interests of Huawei’s customers and consumers. This goes against the US government’s claim that it is motivated by network security.

This decision by the US government does not just affect Huawei. It will have a serious impact on a wide number of global industries. In the long run, this will damage the trust and collaboration within the global semiconductor industry which many industries depend on, increasing conflict and loss within these industries.

The US is leveraging its own technological strengths to crush companies outside its own borders. This will only serve to undermine the trust international companies place in US technology and supply chains. Ultimately, this will harm US interests.

Huawei is undertaking a comprehensive examination of this new rule. We expect that our business will inevitably be affected. We will try all we can to seek a solution. We hope that our customers and suppliers will continue to stand with us and minimize the impact of this discriminatory rule.

According to the Global Times, Huawei had a cunning plan to order loads of chips from TSMC during the grace period included in the US measures, but the Nikkei story would appear to scupper that. To add insult to injury, Nokia has just announced a 5G network deal win with Taiwan Star Telecom. It increasingly looks like Taiwan is doing everything it can to distance itself from the Chinese state, something the latter is very unlikely to take lying down.

The ‘Guardians of the Galaxy Vol. 3’ Trailer Gets Us Ready for a Big Farewell
The Unrelenting Ambition of SoFaygo
How will the growth of cloud gaming impact telecom providers?
On this day in literary history, Anthony Trollope died of the giggles. (For real.)
VMO2: UK mobile and broadband prices have dropped 20% since 2017