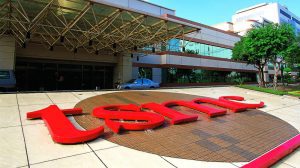 The mobile industry’s default semiconductor manufacturer is building its next fab in the US, a move that could have major geopolitical implications.

Rumours of the US incentivising big chip-makers to expand their presence on US soil circulated at the start of this week and now we know their provenance. Intel is a US company anyway, so the big prise was always going to be TSMC, which has most of its operations in Taiwan. It looks like bribes offers of support from the US government were too good to refuse.

“TSMC today announced its intention to build and operate an advanced semiconductor fab in the United States with the mutual understanding and commitment to support from the U.S. federal government and the State of Arizona,” opened the TSMA announcement.

“This facility, which will be built in Arizona, will utilize TSMC’s 5-nanometer technology for semiconductor wafer fabrication, have a 20,000 semiconductor wafer per month capacity, create over 1,600 high-tech professional jobs directly, and thousands of indirect jobs in the semiconductor ecosystem. Construction is planned to start in 2021 with production targeted to begin in 2024. TSMC’s total spending on this project, including capital expenditure, will be approximately US$12 billion from 2021 to 2029.”

This development is likely to be highly antagonistic to the Chinese government. Not only is the US already trying to restrict Chinese access to the US component ecosystem, Official Chinese policy insists Taiwan is part of China. Hence every move closer to the US Taiwan makes will be perceived as a strategic threat by the CCP. It will be interesting to see how TSMC deals with the political fallout from this announcement and it wouldn’t be surprising to see it announce an offsetting move there too.