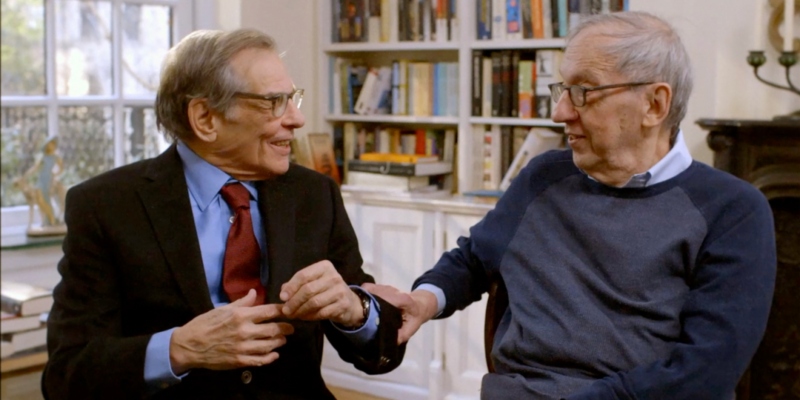 I can’t promise that you will find the documentary Turn Every Page as delightful as I did. Most of its nearly two hours are occupied with traditional sit-down interviews, and most of those alternate between the same two men, both privileged New Yorkers, one of whom is in his late eighties and the other in his early nineties. The narrative tension, such as it is, centers on whether one will live long enough to finish writing a certain long-awaited book and the other will live long enough to edit it. But if you love great writing—and especially if you love the messy, idiosyncratic, extremely human process of turning good writing into great writing—I predict that you will love this movie.

Part of the appeal of Turn Every Page is the stature of its two stars: the political biographer Robert Caro and the book and magazine editor Robert Gottlieb are legendary in their respective fields, and each could fill several documentaries with entertaining anecdotes. This film, however, is about their half-century-long working relationship, which has produced The Power Broker, the epic and celebrated biography of New York City planner Robert Moses of New York City, and the even more epic and celebrated The Years of Lyndon Johnson, whose fans await its fifth and final volume.

Both Caro and Gottlieb are—at least at first—reluctant to talk about their joint process, protective of their secret sauce. But director Lizzie Gottlieb, Bob’s daughter, coaxes the details out of them, and what emerges is not only the story of an extraordinary partnership but a valuable lesson in the demands and rewards of any artistic collaboration.

Gottlieb is especially insightful about the role of a book editor.

Gottlieb, the former head of Simon and Schuster, Knopf, and The New Yorker, has edited more than 700 books over the course of his career, including works by Joseph Heller, John le Carré, Salman Rushdie, and Toni Morrison. (Catch-22, he reports with no little satisfaction, would have been called Catch-18 when it was published in 1961 but for the release of the Leon Uris novel Mila 18 shortly beforehand; determined for the then-unknown Joseph Heller to have a distinctive title for his debut, Gottlieb came up with the alternative.)

When Gottlieb first met Caro, the latter was an investigative reporter at Newsday with an unwieldy manuscript about a bureaucrat named Robert Moses. Gottlieb, recognizing a masterpiece in the making, signed Caro to Knopf and helped him cut a million words down to a still-sprawling but more manageable length. After the success of The Power Broker, Caro and Gottlieb decided almost telepathically that Caro would tackle Lyndon Johnson next. While the Johnson biography was originally conceived as three volumes, Gottlieb has stood by Caro through four volumes and into the fifth, sticking with the project even after he left Knopf to become editor of The New Yorker.

Both Caro and Gottlieb describe their line-by-line work as contentious, but it’s clear that their battles over chapter structure and semicolons, no matter how passionate, have always been confined to the page, strengthening rather than threatening their relationship. Gottlieb is especially insightful about the role of a book editor, observing that it somewhat paradoxically demands both service to the author and confidence in one’s own judgment. (He maintains that Caro is wrong about semicolons.)

Professional relationships as close and supportive as that between Caro and Gottlieb have always been rare, in book publishing as everywhere else, and accessible to only a few.

Caro, who wrote about his own methods in his 2019 memoir Working, is initially more circumspect than Gottlieb on camera, but opens up when he begins to reminisce about the three years he and his wife Ina spent researching Johnson’s early life in the hill country of Texas. It is likely no accident that Caro and Gottlieb, whose outwardly comfortable childhoods were both scarred by cruel fathers, recognized that the sunny conventional narrative about Johnson’s boyhood was also shadowed by a father who refused to see his son. Caro’s canny, patient uncovering of the truth mirrors the editing process, and serves as the emotional core of the film.

While writers, editors, and readers are likely to be charmed by Turn Every Page, they may also find it frustrating. Professional relationships as close and supportive as that between Caro and Gottlieb have always been rare, in book publishing as everywhere else, and accessible to only a few. Today, the increasingly cruel economics of book publishing make them impossible—except, perhaps, for authors with platforms of Prince Harry proportions.

Which means that Lizzie Gottlieb’s record of the collaboration between her father and Robert Caro is not only a fascinating historical document but a useful illustration of an ideal. In a better world, and a better industry, such attention and care would be routinely available to all. Until then, artists and craftspeople must strive to offer it to one another; Turn Every Page shows us how.