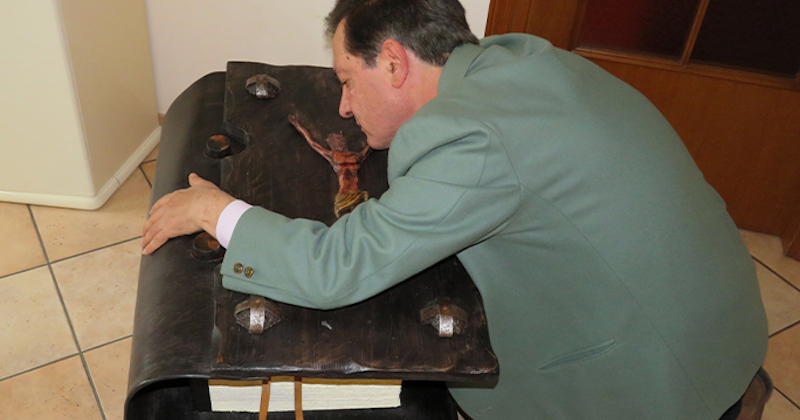 We all took up a new hobby during the pandemic, whether it was knitting, baking, pottery, woodcarving, running, mixology, rollerblading, or mirror typing ancient books in their original languages using an elaborate system of blank keyboards.

Yes, for a while there it seemed like every Gen Z influencer on TikTok was recording themself typing out the Egyptian Book of the Dead, in total silence save for the clacking of keyboard keys, for hours and hours and hours on end, to a rapt audience of millions around the globe.

For real though, a 63-year-old Italian accountant by the name of Michele Santelia not only revels in this extremely niche pastime, but also holds the world record for the most books typed backwards (81, in case you’re wondering).

Michele discovered his ability to “easily type backwards” over 30 years ago, and has been obsessed with the unusual process ever since. As mentioned, he types each book in its original language–whether it be Hieroglyphs, Old Hebrew, Traditional Chinese, Mayan, Etruscan, Cuneiform, or Voynich glyphs–using a quartet of custom made blank keyboards.

Among his backwards-typed books are: the Epic of Gilgamesh, the Code of Hammurabi, the Bible, all of Leonardo da Vinci’s writings, and Guinness World Records 2002.

Michele cites da Vinci, one of the world’s first known practitioners of mirror writing, as the inspiration behind his decision to pursue mirror typing: “It is to his enlightened mind that I, with great humility, attempt to compare [myself] in order to try to understand his mysteries, his secrets and ancient virtues!”

Once he has typed out a book in its entirety, Michele prints the text onto large pages before binding it with a beautifully-adorned cover. He often uses the completion of these impressive and incredibly labor intensive creations to highlight the suffering of particular groups or individuals, and regularly gifts the finished books to prominent public figures.

Over the years, Michele has gifted several of his books to prominent public figures, such as former US presidents Bill Clinton, George Bush, and Barack Obama; Popes Johannes Paul II and Benedict XVI; and former Italian presidents Carlo Ciampi and Giorgio Napolitano.

Michele’s latest book, Das Nibelungenlied Backwards, a medieval German heroic epic, was typed in 2022. Michele dedicated it to “the disabled people of the whole world; to all those who suffer daily in a bigoted and clumsy society.”

While the biblical Tower of Babel represents confusion, mine is written in languages from around the world, but in reverse. It is therefore the allusion to a return, precisely backwards in an idyllic world, where there is no longer unprecedented violence, false ideologies, horrendous crimes, unspeakable evil, absurd power and political games!