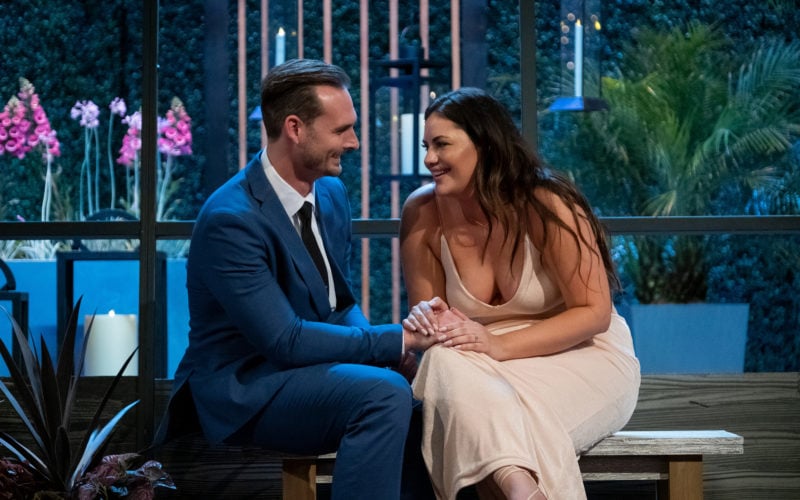 When it comes to body diversity, reality television dating shows consistently fall flat. But do we even want to be part of a world where fat people are viewed as unlovable?

Whenever new reality dating shows are announced, I cross my fingers for fat contestants. As a fat person, I’m used to not seeing myself on TV unless the role upholds the tired tropes of fat folks being sad, lonely, sexless and unloveable. But still, I hope that we’ve come far enough that we’ll finally see ourselves on reality TV finding love, loving ourselves, and having sex (because news flash: we do) like everyone else. I thought Love Is Blind might be the show to change that, considering its entire premise is supposedly about the unimportance of appearance. I was wrong.

I had a glimmer of hope when I realized that Alexa Alfia, the first not-super-skinny main character on the show, would be a fixture in season 3. It’s a welcome change after Love Is Blind previously baited us in previews and didn’t deliver, by including plus-size women in the season 2 trailer only for them to not make it past the first episode. To be clear, Alfia is by no means fat, and yet her early storyline revolves around that supposed fact. During her introduction episode, she says, “I’m curvy; I’m not for everybody,” and that she could “stand to lose some weight.” Casting Alfia is presumably the show’s response to being called out last year for lacking size-diverse contestants, to which co-host Vanessa Lachey blamed fat people for being too “insecure” to put ourselves forward for casting.

Love Is Blind’s treatment of fat people isn’t a surprise, considering the reality TV genre makes buckets of money by poking fun at fatness. Just look at shows like The Biggest Loser and My 1000-Pound Life that serve to both humiliate and degrade fat people. There’s even an entire Reddit master list of unscripted shows about larger people. Knowing what we know about how society feels about us, it’s not shocking that we wouldn’t be included in shows about finding love. Who would love us, after all, when according to influential people like Lachey, we don’t even love ourselves?

While Alfia has gone on to speak favourably about her body, leaning in to her love for food and the validation from her fiancé Brennon Lemieux (who *gasp* still liked her after seeing her), it left me wondering why there is still so much resistance to size-diverse casting in the unscripted world — and if we really want to be included in it at all.

Amanda Gardner, 25, has the same question. A popular TikTok creator, Gardner has become a fan favourite on the platform for her pop-culture commentary and calling people out on their fatphobia. Along with loving fashion and beauty, she also loves reality TV, Temptation Island and The Bachelor, specifically — two shows notorious for excluding fat people. (After 44 seasons of The Bachelor and Bachelorette, there have only been two plus-size contestants, prompting the Roses for Every Body campaign.)

Back in February, Gardner posted a TikTok about this very issue, explaining how she’s glad fat women aren’t included in love-based reality TV shows. “Not only would they not get picked like they do Black women,” she says in the video, “it would literally turn into how to lose weight, it’s going to turn into fitness 101 real quick. [Directors and producers] don’t know how to work with fat bodies. They think the only thing associated with fat is losing weight.”

In a perfect world, everyone would be included in these shows. But the world isn’t perfect. Fat is still seen as undesirable and so fat people can’t find love until they’re thin, of course. Instead, they take side roles. “The reality is that we have so many people [who] tell stories of being the fat friend that guys avoid,” Gardner says in an interview with FASHION. “I don’t think it would be an enjoyable experience and I don’t think they’d find what they’re looking for.”

If fat women were included in reality dating shows, three things would happen, she continues: the most palatable fat women (read: white, small waist, flat stomach, big butt) would be cast, they wouldn’t get picked as love interests, and many media voices and viewers would have a fit, claiming the show was “promoting obesity.” We’ve seen it before. In season 2 of Love Is Blind, plus-size characters Chassidy Mickale and Hope Antoinello-Foley were included in previews and quickly dumped — but not before fielding crappy questions from their fellow contestants, like last season’s villain Abishek “Shake” Chatterjee who slyly asked Foley if she likes working out, presumably to rule out the fatties.

But there are television producers trying to do it right. Louise Green, a weight-neutral fitness instructor and author of Big Fit Girl, has been pitching her own reality show about fitness for all body types for two years, even meeting twice with one of the biggest subscription streaming services in the world. “At this point, we’re now in redevelopment because we can’t land a deal under the current concept,” she says. “People can’t wrap their head around an empowering show where people are challenging stereotypes without it being about weight loss.”

Aisha Fairclough, TV producer and co-founder of Body Confidence Canada, dedicates her time to advocating for body-size diversity in the unscripted world. One of her latest projects 1 Queen 5 Queers is proof of that. For her, it’s imperative to include fat folks in this space, but she says it’s up to the people behind the camera to make it happen. “[They] have to be diverse,” Fairclough says. “They have to be advocating in their writing; writing nuanced characters that ensure their storyline includes all aspects of their life,” not just their fatness.

“You have to make an effort to write casting calls that are inclusive, that will make somebody who isn’t a size eight feel they can apply,” Fairclough adds. But sadly, viewers at large are comfortable with not having their beliefs about fat people challenged. “We are often comfortable with these storylines because a lot of people see fat people as the underdog.” Society wants to believe in the fantasy that being thinner is better. Without a world in which this is true, how can we justify the lengths we go to bend to society’s standards of beauty, a constantly moving target that entire industries, careers and lives are built on? And who better to uphold that than a stereotyped fat character?

But Fairclough points to shows like Lizzo’s Watch Out for the Big Grrrls, Grand Crew, Thick House, Supersize Salon and BET’s First Wives Clubs as ones that do it right. By having size-diverse casts whose stories don’t hinge on their bodies and make “being fat” their only personality trait, we can celebrate them in their wholeness. In other words, Fairclough says, see fat people as actual human beings.

Everyone loves a good story. (I know I do.) When it comes to reality television, we know it’s not actually real. But shutting off our brains and going on a watching spree of our favourite reality show feels good. The characters are distilled into easy-to-digest packages, unlike the real world where people are complex, deep, and require thought and care. But viewers are asking for more. We want to see what’s real.

I want to see people who look like me being valued for who we are as people. We want our stories to be given the same depth afforded to thin people, and be seen as human beings who are desirable, deserving, and capable of love, rather than as a weight-loss project or a before photo. It’s time for reality TV to start reflecting — oh, I don’t know — reality. Because in the real world, outside of the fatphobic cultures we live in and the shows that tell us otherwise, we are. And that’s a damn good story.

Xbox Game Pass December 2022: Lego Star Wars The Skywalker Saga, High on Life, and More
Carillon Miami Wellness Resort: A Spa Mecca in Miami
The Best Shampoo For Men You Can Buy In 2022
A Suspect in Takeoff’s Murder Has Been Arrested
20 Best Flat Top Haircuts For Men: Top Hairstyles 2022