Join Wonderama TV, the Times Square Alliance and One Times Square for the Taping of the “Biggest Halloween Parade in History II” Global Television Broadcast as We Celebrate Trick-or-Treat for UNICEF on the 10-story High Scareen on One Times Square.

All are encouraged to “add some meaning to your Halloweening” by participating on Sunday, October 30th from 11:00AM ET to 12:30PM ET in Times Square.

It’s back and bigger than ever! Join Wonderama TV, the Times Square Alliance, and One Times Square for the “Biggest Halloween Parade in History II” and “add some meaning to your Halloweening” by celebrating Trick-or-Treat for UNICEF on Sunday, October 30th, in Times Square from 11:00AM ET – 12:30PM ET. This is the only Halloween parade to show families in costume on screens and around the world.

This incredible Halloween celebration will be live from and streamed from Wonderamatv.com so families can watch from anywhere in the world! The procession begins at Broadway and 47th, and heads down Broadway past our Parade review stage in Duffy Square Park towards the iconic One Times Square, which will be transformed into the “One Times Scare” Wonderama Wonderwall. See the promo here.

“Times Square has come alive this fall with children and families exploring all that Times Square has to offer and now we are ready to welcome them back for Wonderama’s taping of this Halloween Parade,” said Tom Harris, President of the Times Square Alliance.  “We hope they all have a memorable Halloween experience with our partners from Wonderama and UNICEF and continue to enjoy all the family friendly activities listed at TSQ.org/Families.”

The parade taping will be packed with talent.  Jazz at Lincoln Center Jazz Academy’s “Second Line Band” will be kicking it off New Orleans style. Wonderama Host David Osmond, Kanisha Marie Feliciano from Broadway’s Phantom of the Opera, the cast of the off-Broadway show Titanique and Stranger Sings, Kelvin Dukes and Sophia Angelica will help us “add some meaning to our Halloweening” as we celebrate Trick-or-Treat for UNICEF, an amazing cause that has been doing good for children across the globe since 1950.

“In honor of spooky season, we are excited to celebrate Trick-or-Treat for UNICEF’s reimagined experience alongside Wonderama in Times Square for a second year in a row,” said UNICEF USA Chief Marketing Officer, Shelley Diamond. “As the cherished month-long campaign evolves into an entirely virtual experience, participants of all ages are encouraged to get involved and raise critical funds for UNICEF by incorporating the unique QR Code into Halloween activities. Funds raised from this year’s campaign will support UNICEF’s lifesaving working for every child.” 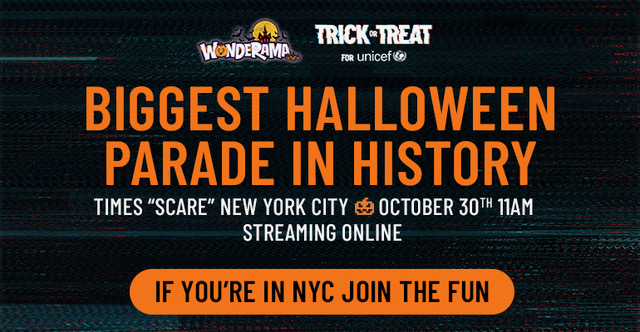 Last year, Wonderama’s “Biggest Halloween Parade in History” virtual parade celebration was covered on national broadcast television, on social media, in national print and seen around the world with UNICEF USA via a live stream broadcast around the globe to celebrate Trick-or-Treat for UNICEF. This year will be even bigger.  Visit www.wonderamatv.com/HalloweenParade to find out more about where to watch the parade and how to also be IN the parade in costume!

For over 70 years, Trick-or-Treat for UNICEF has inspired Americans to raise $195 million for lifesaving programs for children around the world, providing a philanthropic opportunity for all who love Halloween. Throughout October, everyone can participate by visiting www.trickortreatforunicef.org and downloading spooky QR coded assets to use at Halloween parties, fall events in their communities, and for trick-or-treating on Halloween night. You can also make a donation on the website and spread the word on social media using the hashtag #ToT4UNICEF.

To learn more about the parade, visit www.wonderamatv.com/HalloweenParade.

Wonderama is a cross-platform media and entertainment lifestyle program that marries positive social impact with good TV. Building upon the legacy of the iconic “Wonderama” kids variety show that aired on U.S. television for over four decades, the show creates original and “curated” content to entertain, educate and inspire kids and families in an expanding market. Wonderama’s core mission is to encourage kids to aspire to their dreams, with the greatest respect to the audience. The new Wonderama is now in production of its seventh full season of original programming.

About The Times Square Alliance

The Times Square Alliance works to improve and promote Times Square – cultivating the creativity, energy and edge that have made the area an icon of entertainment, culture, and urban life for over a century. Founded in 1992, the Alliance keeps the neighborhood clean and safe, promotes local businesses, manages area improvements and produces major annual events with partners including New Year’s Eve, Solstice in Times Square and Taste of Times Square. As the custodians of Times Square, the Alliance works every day to improve the quality of life for the neighborhood residents and businesses while driving economic growth in New York City. www.TSQ.org.

About One Times Square

One Times Square is a globally recognized landmark located in the heart of Times Square, broadcasting monumental moments within the world’s history, and has served as the home of the iconic New Year’s Eve Ball Drop Celebration since 1907. With a daily pedestrian count of 130 million in a typical year, and billions of earned impressions from film, TV, the building’s digital signage, and social media, the 26-story property is one of the most visible and recognizable locations in the world, offering brands a global stage to engage with their audience.

In April of 2022, Jamestown, owner of One Times Square, launched a $500 million redevelopment of the property which will open the building to the public for the first time in decades through the creation of a modern-day visitor center, new viewing deck, and an integrated AR-VR brand experience upon completion.

Designed by Cyrus L. W. Eidlitz and originally built in 1904 to serve as the headquarters of The New York Times, One Time Square is one of only two stand-alone buildings in the neighborhood offering clear, unobstructed sightlines from all points within the Times Square “bowtie,” an area which encompasses Broadway and Seventh Avenues from 43rd Street to 47th Street. For more information, visit onetimessquarenyc.com.

The United Nations Children’s Fund (UNICEF) works in more than 190 countries and territories to pursue a more equitable world for every child. UNICEF has helped save more children’s lives than any other humanitarian organization, by providing health care and immunizations, safe water and sanitation, nutrition, education, emergency relief and more. UNICEF USA advances the global mission of UNICEF by rallying the American public to support the world’s most vulnerable children. Together, we are working toward a world that upholds the rights of all children and helps every child thrive. For more information, visit www.unicefusa.org.

Zelda Fitzgerald: Writer, Muse, and… Painter?
Tess Gunty’s The Rabbit Hutch is coming to the screen.
CWU and BT reach ‘final agreement’ over strikes
Hoping to beat the tourist crowd on your trip to Japan? That ship has sailed
How To Tie A Bow Tie: Simple Steps And Instructions 2022