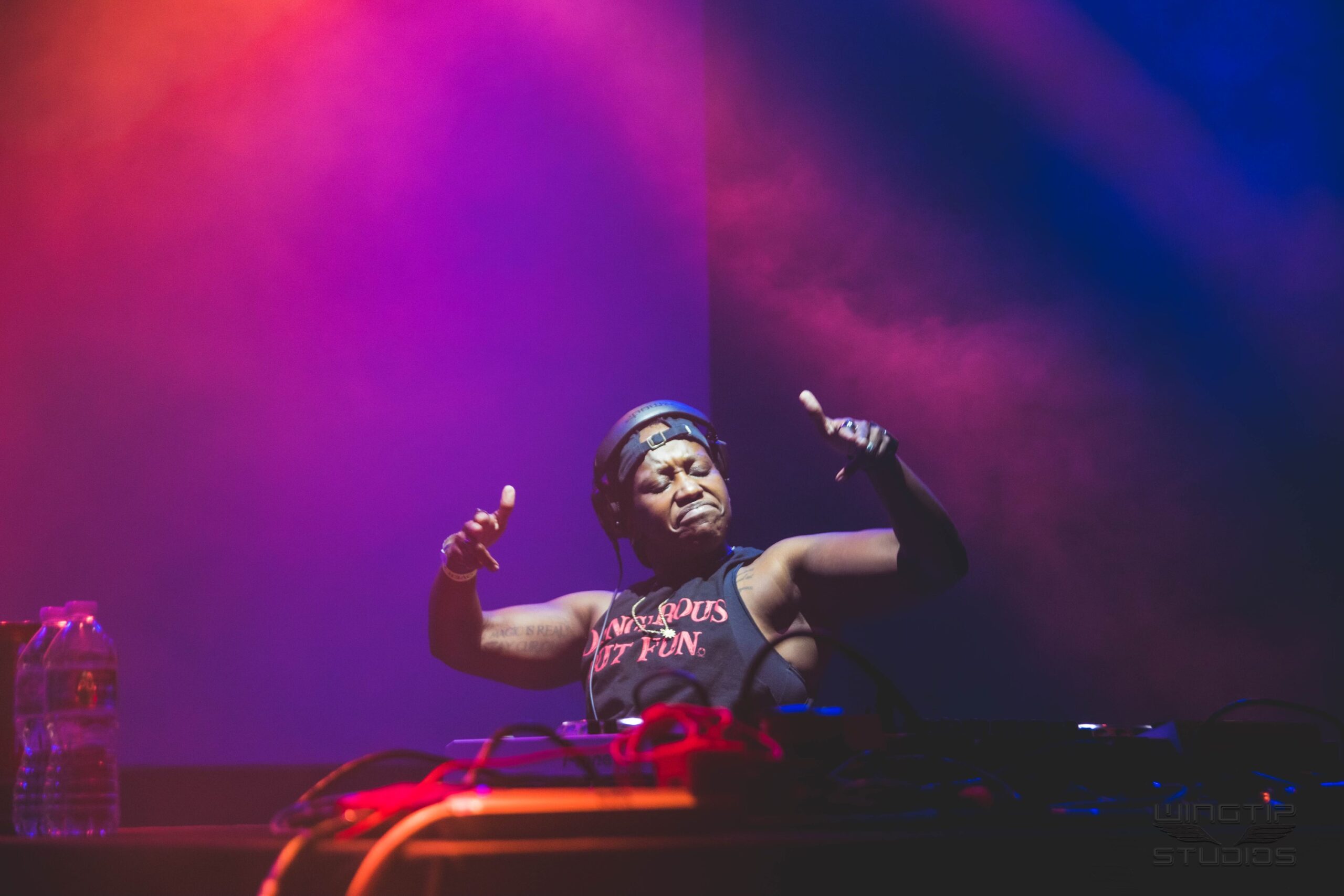 Over Labor Day Weekend in New York City, I got the incredible opportunity to sit down and speak with Atlanta-based gut music pioneer, Canvas. Canvas opened up CloZee’s Odyzey stage takeover on the final day of Electric Zoo. We spoke about a variety of topics from discussing what imposter syndrome is, her relationship with CloZee and much more. Canvas just released her latest single “Feelin’ for You” on CloZee’s imprint record label Odyzey music.

Tell me more about gut music. Is that what you are primarily focusing on with the Canvas project?

I grew up playing classical music, I am a drummer, and I got into electronic music a little bit later. So I can see how all these pieces of sound connect but the idea of gut music is not defined by one type of genre. It’s not just dubstep, it’s not just tech house, it’s not just bass, it’s whatever. It’s that feeling that hits that spot. I would love to in the near future start a label. And bring up producers that make music that gives that feeling like oooof.

Talk to me about the Canvas project, what do you plan to accomplish with the project?

Aside from making music that’s emotive and things like that. I really want us to build a community of people that understand that they are not defined by one thing and the person right next to them could be their next best friend. And through the project it’s just cultivating that community and growing it through sound and feeling and that’s what we talk about in gut music. It’s that feeling of whenever you felt sad and music has hit that place. And that’s what we are going for. It’s all for that feeling and bringing people together that want to feel a journey and they are down for whatever type of sound.

How does feel to be in New York City over Labor Day weekend playing your EZoo debut? What was going through your head?

We came the day before just to get a feel of the energy and the energy is hot. Everybody is ready to go. So opening the stage is an honor. It gave me the opportunity to set the stage, set the day, and set the tone right. It was hot, but people were hanging in there, so I appreciate everyone’s resilience at this festival.

Beyond music how do you plan to create a transformative experience for your fans?

Music is so much now. There’s visual art, spatial awareness art, so the idea is to link all these people together in this community and find pockets where they connect and create environments. We could do, like it’s not just about the music, we can have someone feature some piece of art and it’s playing music that someone else made but it’s a Canvas event. So were cooking up some ideas but the idea is that it’s beyond music.

Talk to me about the creative process behind the song Feelin’ for You.

If anyone’s ever met someone that they have such a deep and intimate connection with, it’s about feeling for someone so intensely that your like I can’t deal with myself. So that’s what that release is about. I start to hear melodies in my head whenever I have such strong emotions. So I started feeling these things. A little bit of anger a lot of happiness and some confusion of falling in love with somebody. And that’s what that song is literally about, it’s like that first hit of being in love.

As far as next year talk to me about projects do you have any projects planned out?

I’m going to be touring. I have a couple more festivals till the end of the year. I’m going to CloZee’s event in the caverns. In addition there’s a lot of collaborations I want to do. There are some side projects outside of Canvas. It’s about bringing that cathartic experience for people so that they walk away feeling cleansed.

Tell me more about your relationship with Chloé, how has she impacted you as an artist?

Chloé has been a huge and major support system. I opened up for her at the eastern in Atlanta and from there it’s kind of just blossomed and transformed. One she is one of the hardest workers I know and two she wants to put on all kinds of artists from all different walks of life.

Tell me about what Canvas the name means to you?

Every time we show up to a set or every time we are at a new experience or a new event. That is the canvas. It’s not just me it’s everyone that’s there and the energy that is given back and forth.

What would you say to aspiring producers that look up to you, your sound, and your brand?

Talk to me more about what imposter syndrome is?

It’s the idea that you don’t belong there or that you are pretending to be this person with all these bigger artists and bigger names. Knowing that everyone feels that even some of the biggest artist I know here have talked about imposter syndrome. Feeling like oh I’m not good enough I don’t belong here. Let that little voice go.

Who would you name as your top 3 artists to watch next year?

There are quite a few Tape B, another artist out of Atlanta Pump Fake his name is Chris. His production is so crisp it’s so clear and he’s a teaching kind of person and a third is NotLö she’s already blowing up.

Is there anything else you want to say to your fans before we leave?

Thanks for the support and thanks for seeing me as I am. It allows me to be the most authentic version of myself and I hope when I perform It allows them to feel that as well.

Of course LCD Soundsystem’s first new song in 5 years is for the adaptation of White Noise.
Meet the Writers on the Baillie Gifford Prize Longlist
‘Riverdale’ Actor Ryan Grantham Afraid He Could Be Brutalized in Prison
Key Quotations from Macbeth Explained
Will Laroca Drops Addictive, Pop Oriented House Track, “Holy Ones”