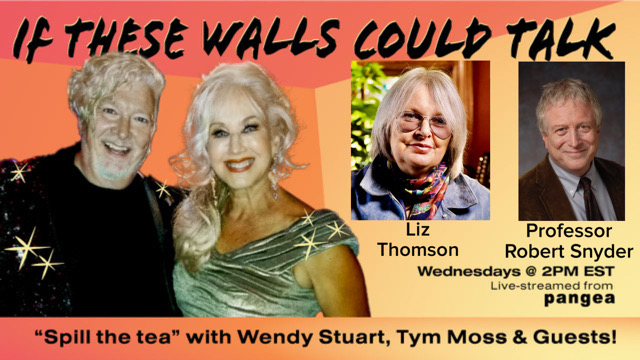 Who else but hosts Wendy Stuart and Tym Moss could “spill the tea” on their weekly show “If These Walls Could Talk” live from Pangea Restaurant on the Lower Eastside of NYC, with their unique style of honest, and emotional interviews, sharing the fascinating backstory of celebrities, entertainers, recording artists, writers and artists and bringing their audience along for a fantastic ride.

Liz Thomson and Professor Robert Snyder will be featured guests on “If These Walls Could Talk” with hosts Wendy Stuart and Tym Moss on Wednesday, September 7th, 2022 at 2 PM ET live from the infamous Pangea Restaurant.

Wendy Stuart is an author, celebrity interviewer, model, and filmmaker and along with If These Walls Could Talk she hosts TriVersity Talk, a weekly web series with featured guests discussing their lives, activism and pressing issues in the LGBTQ Community.

LIZ THOMSON, Co-Founder and Executive Producer of The Village Trip, and the festival’s Joint Artistic Director, was born and raised in London, has long been fascinated by Greenwich Village, an area she has come to know well over two decades of visiting, always staying at the Washington Square Hotel. The idea for The Village Trip sprang from her work on the restoration of the late New York Times journalist Robert Shelton’s biography of Bob Dylan, No Direction Home (2011), which chronicles in vivid detail the 1960s Village scene. She is a widely published journalist and author and a frequent broadcaster and has appeared on platforms at literary festivals around the world as an interviewer. A contributor to The New Grove Dictionary of Music & Musicians, she has lectured at Liverpool University’s Institute of Popular Music and been a Visiting Fellow of the Open University Sixties Research Group. Liz is the co-founder of Square Roots Productions, a UK-based charity celebrating the folk music heritage which connects the British Isles with North America, and a founding trustee of the Desmond Elliott Prize for first novelists. Find out more about Liz at www.lizthomson.co.uk

Robert W. Snyder, Manhattan Borough Historian and professor emeritus of Journalism and American Studies at Rutgers University, has devoted his career to writing and teaching about the history of New York City. Currently editing a documentary history of the Covid pandemic in New York City, he has written for both scholars and the general public in books such as Crossing Broadway: Washington Heights and the Promise of New York and All the Nations Under Heaven: Immigrants, Migrants and the Making of New York. He has worked with the Smithsonian Institution, National Public Radio and the Museum of the City of New York to share history with a broad public and was a Fulbright lecturer in American Studies in Korea. He is a member of the New York Academy History and lives in Manhattan.

Watch Liz Thomson and Professor Robert Snyder on “If These Walls Could Talk” with hosts Wendy Stuart and Tym Moss on YouTube here: