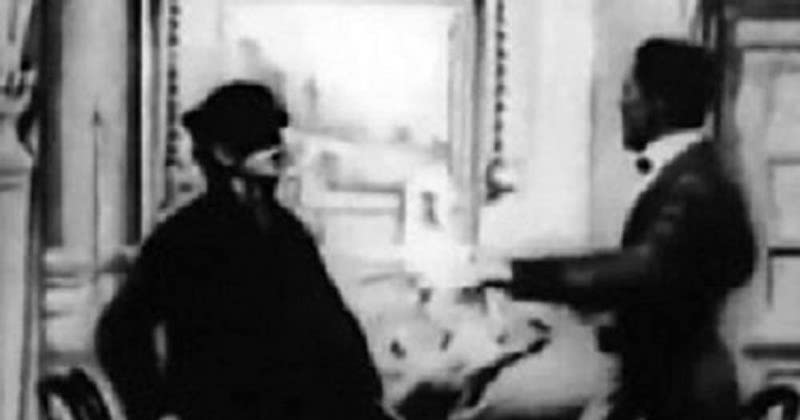 In 2012, Sherlock Holmes was officially inducted into the Guinness Book of World Records as the human literary character most frequently portrayed on film and television: a whopping 254 times, beating out the next most popular character, Hamlet, by 48 portrayals. (Of course, the character has racked up even more depictions in the decade since.) But the first time the famous detective was ever played on screen (that we know of) was in 1900, in a short silent film directed by Arthur Marvin—once considered lost, but rediscovered in the Library of Congress archives in 1968 by Michael Pointer.

The film, Sherlock Holmes Baffled, is only 30 seconds long, and while it doesn’t feature very much sleuthing, the fact that it stars Holmes—even in name alone, as there’s not much in particular coding him as the famous deducer here—means that it is also considered to be the first recorded detective film. It was created to be shown on Mutoscopes—coin-operated, single viewer “moving picture machines” that were frequently installed in arcades and peep-shows, and it presents a conundrum that is baffling indeed. Watch for yourself:

‘Riverdale’ Actor Ryan Grantham Afraid He Could Be Brutalized in Prison
What it’s like to visit Saudi Arabia now
T-Mobile is providing the 5G goods to a new AI wildfire detection system
The Mars Volta Played New Songs + Many Classics at Comeback Show
Zeke on ‘Wizards Of Waverly Place’ ‘Memba Him?!