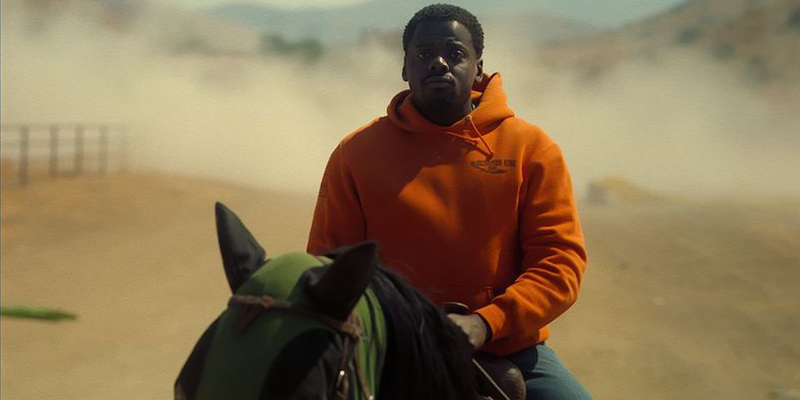 Seeing Nope before all the knowing hype is the closest thing I will probably ever experience to seeing Jaws in theaters in the summer of 1975. Of all the films I’ve been fortunate to critique, few have been as difficult to review as Jordan Peele’s new movie—not because I don’t have much to say about it, but because I’m very afraid of saying too much.

Nope’s clever advertising campaign has shrouded much of the film’s narrative and themes (which for Peele are always the same thing anyway) and my anxiety about diving in too deeply is not a reflection that the film is only interesting for the revelation of its heavily-guarded happenings, as much as an acknowledgement that the film is so well-contained and original that it should not be taken in, should not be digested, any other way than unspoiled and whole.

The story concerns two siblings—Otis Jr., “OJ,” (Daniel Kaluuya) and Emerald, “Em,” (Keke Palmer)—who run their family’s historic movie business, wrangling horses for film shoots. The company is called Haywood’s Hollywood Horses, and the two are film royalty, the descendants of the jockey who rode the horse in Eadweard Muybridge’s famous 1878 photographic motion study that became the first ever film clip when its shots were projected in succession. They live on a horse farm in a remote, picturesque valley of Southern California, surrounded by the kind of glowing, dusty hills that would make John Ford drool. And it is in this valley where strange events start to happen and OJ sees something in the sky that looks like a flying saucer.

Although Nope is a veritable carnival for analysis, it’s still extraordinarily accessible and enjoyable as entertainment.

The siblings don’t quite know what to do, especially because the presence doesn’t exactly seem peaceful, but Em believes that catching it on film will provide their farm with attention and money that they can use to save their business, which has been on the skids since the death of their father (the great Keith David).

To stay afloat, OJ has had to sell off some of their horses—many to Ricky “Jupe” Park (Steven Yuen), a former child star and now the impresario of a nearby Wild West experience, an immersive, reconstructed Old West town-cum-amusement park called “Jupiter’s Claim.” Jupe is the survivor of a traumatic, near-death experience that took place on a TV shoot he acted on as a child in which an animal went berserk, and he has processed this experience by turning it into different kinds of entertainment, time and time again.

This ushers in the film’s main discourse, which is about the relationship between “spectacle” (a buzzword) and the experiences of horror, terror, and danger; that transforming terrifying, unknowable encounters into entertainment is the way humans are able to deal with these things—specifically, unknowable encounters with the natural world. The film is very much about the differences between humans and animals and the ultimate power of nature. Its thesis concerns the precariousness of human intervention, the ultimate impossibility of our attempts to control and corral creatures and forces that are ultimately not like us. That the siblings can only try to face off with the UFO (an entity so powerful and mysterious to them) by capturing it on film is a perfect encapsulation of this theme. Filming something distances the spectator from the subject, makes it legible and safe.

The film has much to say about the differences between looking at something and “watching” it from the safety of simulacrum—so much that after I got back home, I gleefully hauled my old film theory textbooks off my bookshelf and flipped through essays by Christian Metz, Laura Mulvey, and Thomas Elsaesser. Nope is so tight and so rich and has so much to say about our relationship to film that I want to write a term paper on it instead of a review; I want to go deep on how it unfurls meaning and furthers the conversation about “the look” and “the gaze” and other semi-Lacanian philosophies about what film, and entertainment at large, really does for us.

Nope has a lot to say in that regard, even before the moment it establishes a familial link between itself and the first motion pictures ever made, Muybridge’s sequential photographs. The whole film is all about cameras, all about lenses, all about capture. It is, fitting for its Wild West setting, a deep reflection on “shooting” something, taking its likeness, attempting to know it visually.

Although the film is a veritable carnival for analysis, it’s still extraordinarily accessible and enjoyable as entertainment. In fact, it is entertainment with a capital E! Although the film isn’t a horror movie per se, it floats along, neatly building tension and occasionally punctuating it with genuine scares, before galloping through its heart-pounding third act.

Peele is a master at creating iconic imagery, and it’s clear while watching Nope how quickly so many of its aesthetic flourishes will become indelible in film history. Indeed, the movie is a visual playground, dovetailing innovative optical touches with just the right amount of cinematic nostalgia.

His characters, too, are excellently designed, just archetypical enough to fit together while feeling memorable on their own terms—brought to life by a slate of fiercely talented actors. The performances in Nope are some of the year’s best; Palmer summons a perfect balance of bouncy charisma and gritty strength, while Kaluuya’s stoic brother manages to (as is his strong suit) churn endless pathos out of silence and subtlety.

The gravelly-voiced Michael Wincott plays a grizzled cinematographer who’s seen it all but nothing like this—a veteran among the crew reminiscent of Jaws‘s Quint. And as a chatty electronics store employee/UFO enthusiast named Angel who winds up growing intrigued by the siblings’ mission, Brandon Perea nearly steals the show (a feat of atmospheric proportions).

The film is shot with IMAX cameras, so see it on that big screen if you can; it is a movie that is all about viewing, after all, so view it right. It’ll be one additional reminder of the film’s assertion that when you can’t run and you can’t hide, all you can do is watch.

Three: ‘We’ve got the market leading spectrum portfolio for 5G’
Pixel 7, Pixel 7 Pro Launch Date Tipped, Said to Be Available for Pre-Order on Same Day
Bodies Bodies Bodies is a Vicious Parody of Online Culture and a Tight Little Murder Mystery
New York will censor a book about the Attica uprising in its state prisons.
25 Of The Best Men’s Hat Styles: Timeless Investments For Any Sartorial Man (Updates 2022)