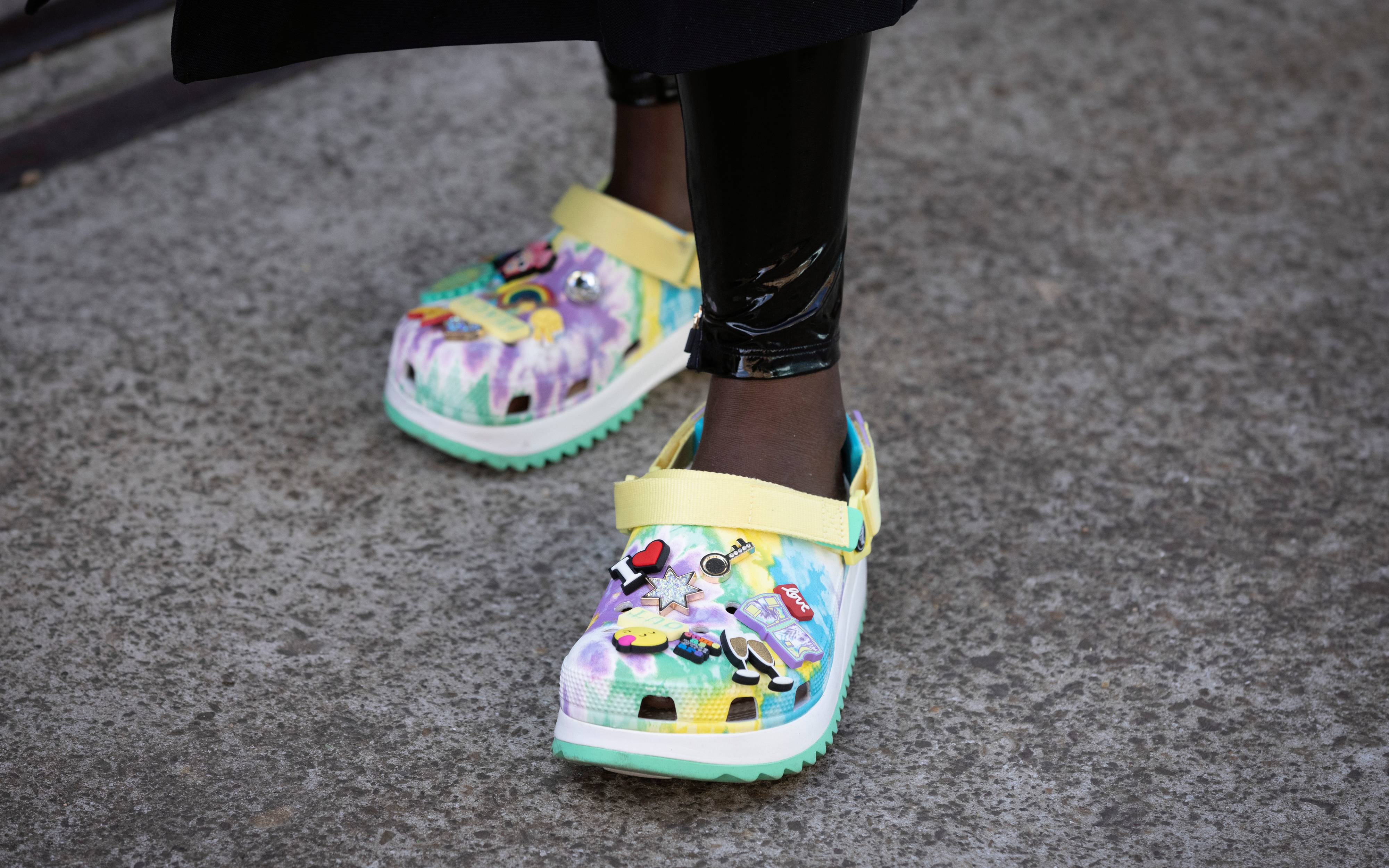 A decade ago, most of us probably wouldn’t be caught dead in a pair of Crocs. Because the foam clogs have an unconventional design that some might call “ugly,” the shunned shoes were a walking joke for years. But after collaborating with designers like Balenciaga and celebrities like Justin Bieber, it would seem that Crocs is having the final laugh.

In the age of dopamine dressing, our appetite for maximalist, weird fashion has never been stronger. Crocs, with their strange, almost child-like designs, undeniably fit that bill. And the numbers speak for themselves; even when consumers were tightening their purse strings in 2020, Crocs grew its sales 12 per cent. But if 2020 marked the shoe’s return, 2022 will see its full-blown renaissance.

For starters, the brand has been busy building its roster of celebrity partnerships. Most recently, Crocs worked with singer Saweetie on the release of limited-edition pastel Jibbitz. Before that, the company partnered with SZA on a nature-themed line and produced a collection of trippy tie-dye designs with DJ Diplo. Other collaborations include Post Malone and Bad Bunny, and this year alone, the shoes have proven to be a red carpet staple, as seen on stars like ​​Justin Bieber and DJ Questlove.

Crocs has even dipped its bulbous toe in high fashion. In recent years, the company has partnered with designers to introduce boundary-breaking creations. In 2021, luxury streetwear designer Salehe ​​Bembury teamed up with the brand to completely reimagine the clog’s classic silhouette with a futuristic design. And Crocs’ going partnership with Balenciaga has been a case study in viral experimentation, entailing chunky platforms, pool slides, goth styles and clog stilettos.

Hungry for more? The label has even given us food collaborations with brands like Kentucky Fried Chicken, Lucky Charms and Hidden Valley Ranch. With each new unexpected partnership, Crocs is reborn again. But before the brand was marketing such unusual designs, it was sold as a modest, practical activewear shoe.

Founded in 2002 as boating footwear, the waterproof, lightweight design was about durability and wearability above all else. Meant to be a comfortable take on the traditional Danish clog, the brand’s resin material was unique at the time. It didn’t take long for the shoe to explode in popularity, and by the mid-2000s, Crocs were ubiquitous.

But its downfall came during the 2008 recession, when the company found itself near bankruptcy. It wasn’t until 2017, with Andrew Rees as its new CEO, that the brand began to reposition itself: marketing Crocs as not just functional, but fashionable. That year, designer Christopher Kane sent furry Crocs down the runway. Of course, it was met with contentious reactions from the fashion world. At the time, Kane called it “the most controversial collaboration” he had ever done.

Today, Crocs are known for their imaginative Jibbitz (shoe charms) and wacky colour palettes. This means they clash with most outfits, and that’s kind of the point. From the return of the Moon Boot to Versace’s viral platform pumps, peculiar footwear is having a moment. But nothing is on the rise quite like Crocs, which forecasts US$5 billion in sales by 2026.

Despite its boost in popularity, Crocs remain one of the most contentious shoes of all time: from dedicated hate sites and Reddit forums to celebs like Dua Lipa and Zoë Kravitz openly voicing their disdain. Even still, 20 years after its inception, Crocs are back whether we like it or not.