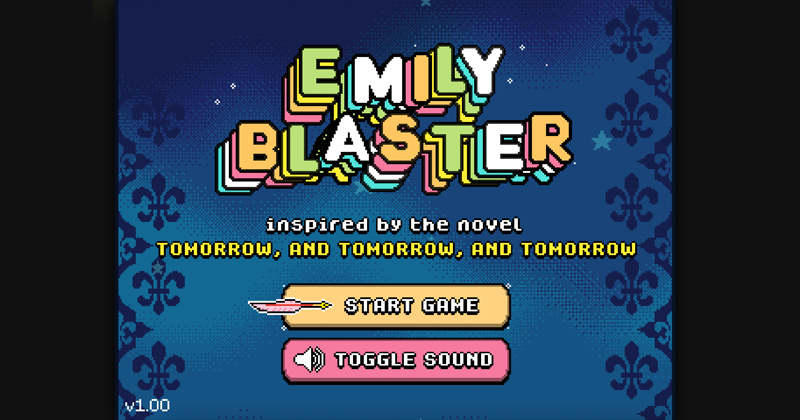 It’s the simplest game in the book, and I needed it to be convincingly something a clever college student might be able to make on limited resources and time in the 1990s. The game was inspired by the poetry of Emily Dickinson and by edutainment games of the 1980s, like Math Blaster! I liked the slight subversiveness of making a game where the object was to shoot poetry, and I thought that Emily Dickinson’s compact verse style and memorable phrasings would make for perfect targets. Emily Dickinson’s poem “That Love Is All There Is” is featured in EmilyBlaster, and it also provides the epigraph for the novel. I’ve been obsessed with this poem for roughly half my life: Dickinson begins with a riddle about love and answers it with a machine-based metaphor. I joked to my editor that this poem is basically Tomorrow, and Tomorrow, and Tomorrow, but in four lines.

When I played the game for the first time, it was somewhat mind-blowing. It felt very close to what I had described in the book, and it brought me back to the fun of early computer games. EmilyBlaster is a little bit addictive and the right amount hard. It might take you a couple of tries to become the Belle of Amherst. Luckily, it turns out that it is fun to shoot poetry. I believe this is Knopf’s first foray into computer games, and I hope they make more! I want to play Great Circle and Sea of Tranquility!

New Summer Programming at Solage, Auberge Resorts Collection
Bill Bellamy ‘Devastated’ by Family Feud Over Father’s Memorial Service
Cisco to pull out of Russia and Belarus for good
Azure Sky is Palm Springs Newest and Coolest Oasis
Tourists are flocking back to Southeast Asia — but the robust recovery is showing signs of cracks