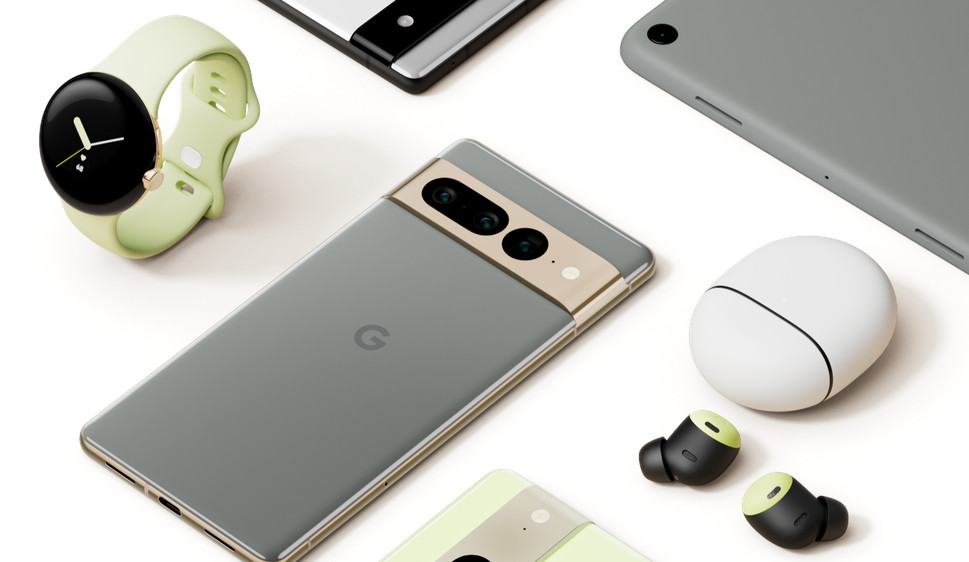 The tech giant signals its growing intentions in the devices market, unveiling new Pixel phones, a smartwatch, a tablet, high-end earbuds and more at its annual announcement parade in California.

Years ago Steve Jobs turned Apple product announcements into stage performances, complete with comedy bits and live audiences, and soon after the rest of the tech industry decided they all fancied a bit of that. Now it seems you can’t release a USB cable onto the market without the fanfare of a West End show.

Google I/O – the tech giant’s annual announcement platform – has more to say for itself than most. They’ve always been announcement fountains, splurging out streams of updates big and small which the tech press clamour to be the first to live tweet, however they usually focus on software. This year the big ticket items were new devices that Google will launch at some point in the future, all of which seems to signal the company’s growing intentions in the market and the wish to build out its own ecosystem of devices.

Probably the most interesting is the Google Pixel Watch. There isn’t a plethora of details, but we do know it will run on Wear OS, which is presumably new software made specifically for this and any other future wearables, and comes pre-loaded with Fitbit health and fitness tools on board. Google purchased Fitbit back in 2019 and it wasn’t hard to predict that they would eventually come out with their own device in the trendy wearbales market at some point.

As is the bane of all modern consumer electronics once the touch screen became ubiquitous, it basically looks identical to every other product on the market, but that was to be expected. More details to be released ahead of a launch in Autumn.

Google says this new smartphone ‘gives you more of what you want — for less than you’d expect’ – which is one way of saying this is a cheaper version of its flagship smartphone. Priced at $499, this is firmly in the mid-range market, though Google insists a lot of the smarts that went into the Pixel 6, such as the fancy camera features and proprietary Tensor chip, are present here as well.

The next flagship smartphone line called inevitably enough Pixel 7 was also previewed. There’s really not much info on this other than it will be powered by Tensor (as you’d expect) and that it’s coming this Autumn. Google says it is ‘built for those who want the latest technology and fastest performance.’

Ditto. As is now practically industry standard, Google’s next flagship phone will be launched alongside and even more high end version. Usually this means it’s bigger and a few extra features are thrown in on top.

Again details are thin on the ground, but you can probably imagine what this is. Powered by Google Tensor, Google says the Pixel tablet is ‘built to be the perfect companion for your Pixel phone, our tablet will blend into your day-to-day routine and help connect the moments you’re on the go with the moments you’re at home.’ There’s more to come in 2023 – but unless they do something really out the ordinary, this will probably resemble a big Pixel you have to connect to wi-fi to use.

Loaded with Active Noise Cancellation. Google’s new ear speakers are apparently built with a custom 6-core audio chip that runs Google-developed algorithms, which were ‘tuned’ by its in-house audio engineering team. There’s more clever gubbins promised as well, such as spatial audio. They will be available to pre-order on July 21st but there’s no news on an exact launch date.

Google has been messing around with smart glasses of one type or another for about a decade, but its never really materialised into something it seems interested in pushing very hard to a mass market. Perhaps the mass market shows no signs of wanting glasses that overlay various apps onto your view of the world, of course. Either way, it looks like Google is having another stab at it. There’s no actual product news, just a protype which is demonstrated here:

Aside from the hardware, there were a zillion different updates and micro-announcements about the latest iteration of Android, search, maps Google Assistant, and various advancements its made in AI and machine learning – all of which you can read about in depth here if you are so inclined.

However it is clear that the star of the show was Google’s new range of hardware. It’s not just trying to turn a coin by selling various devices, what comes across loud and clear is that it is trying to build out a cohesive ecosystem.

It will say this is because there are myriad advantages it can bring to bear once you get its earbuds, phone, and tablet synched up and singing in unison – however the business case is obvious. Once you’ve gone and bought yourself a Google Pixel Watch, when it comes to upgrading your phone you’re probably going to stick with a compatible Pixel model rather than make the jump to Apple or pick up something from Sony or Samsung. The same can be said for Apple’s portfolio of products, and it has certainly done them no harm.