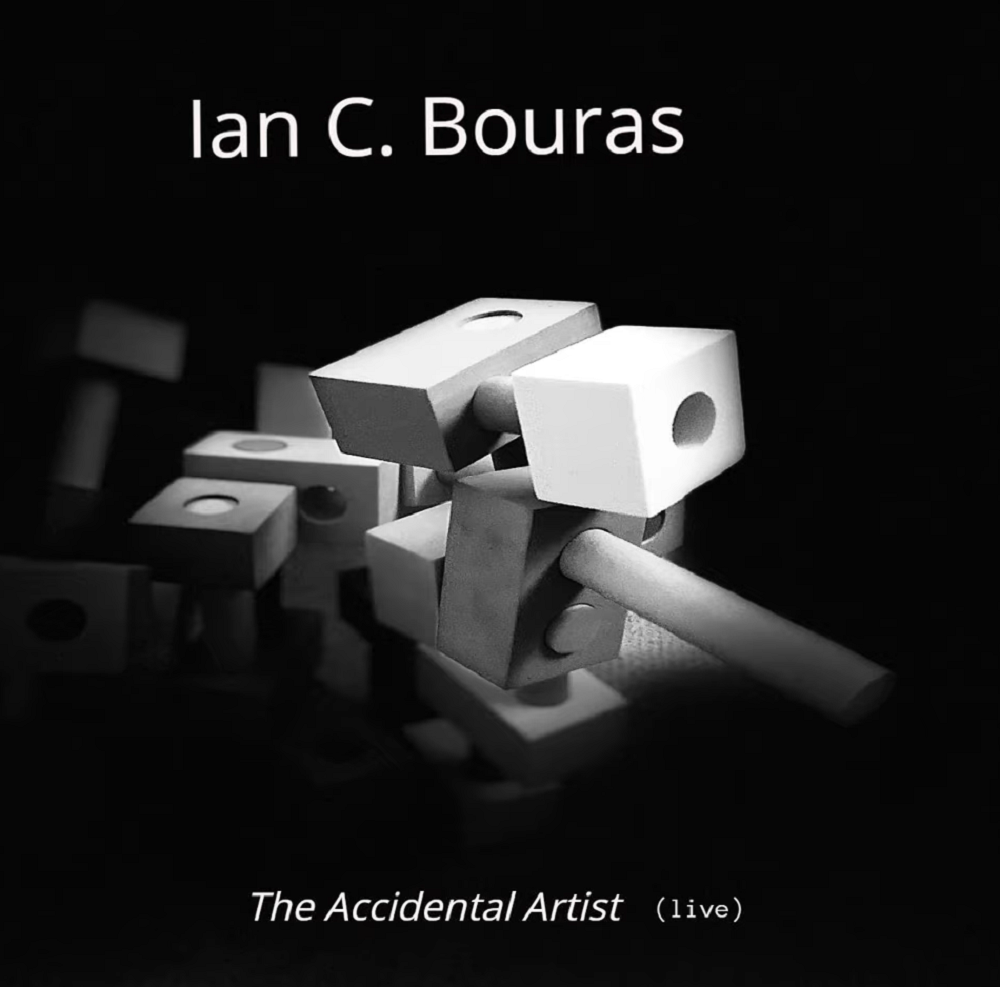 Ian Bouras’ “The Accidental Artist” is the latest chapter in the songwriter and guitar player’s musical story and it’s epic and amazing. It is a fitting title. Only Bouras can say this with certainty, but it isn’t difficult to imagine the younger version of Bouras often thinking about little else but just getting out and playing for people in his salad days as a professional musician. Ataxia changed everything. The onset of this rare neurological condition likely forced a wholesale revision of everything he could depend on and believe in.

It forced him to approach his guitar playing in a much different way. Bouras’ Ataxia-imposed physical limitations pushed him into changing his instrumentation, using different guitars and gear before, but the introduction of looping effects into his work reconfigured its sound more than anything else. What many may dismiss as a heavy-handed affectation is, in his hands, an artistic tool.

“The Accidental Artist”, written for the PVD International Looping Festival, is shorter than many past Bouras pieces. It nevertheless represents a peak moment in his recording catalog as the track scales greater heights than previous compositions. His ability for invoking an elegiac musical landscape is unrivaled. There is always a sense of leave-taking in Bouras’ music, a poetic mood with deceptive strength.

The beauty of the track is obvious on the first listen. His shift from one Holzer guitar to another late in “The Accidental Artist” might have broken the musical spell for many listeners, but that doesn’t happen here. The brief is break and even that short silence will actually play like part of the composition for many. It may seem like a musical kiss of death to some.

Some listeners will hear a sedate quality in Bouras’ music they find disagreeable while others will be enchanted with its lyrical beauty. That latter feeling is one of the dominant moods sustaining his musical work and his strong grasp of melody remains as intact as ever. He has filmed and released a promotional clip for the video featuring, as always, Bouras playing solo in cozy surroundings.

His casual attire is an excellent match for the homeliness of the setting. Even the slow care of his movements when he switches guitars is in keeping with the track. His videos are never colorful and gaudy productions. Bouras obviously intends his clips to compliment the music rather than being able to stand on their own and they eschew the stereotypical tropes of music videos. The color scheme is restrained, like the music.

It is an overall satisfying artistic and musical experience. Intelligence sparks off every chord, every note, and the entire package likewise brims with intense creativity. You can’t dismiss the emotion either. Instrumental tracks have never enjoyed much commercial cachet, with rare exceptions, but it is apparent that isn’t his concern here. This is music dug up from the marrow of his being rather than some transitory pop confection. “The Accidental Artist” comes from a place deep within but Ian Bouras makes it live for every listener.

Elizabeth line: Huge new underground railway opens deep beneath London
A 17th-century book about the existence of aliens has been found in England.
How Everything Everywhere All At Once Became a Juggernaut
A Monopoly Game Just Spoiled the Stranger Things Season 4 Finale
A Summary and Analysis of Jorge Luis Borges’ ‘Tlön, Uqbar, Orbis Tertius’