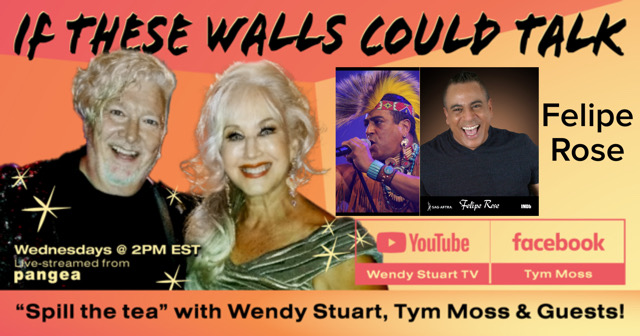 Who else but hosts Wendy Stuart and Tym Moss could “spill the tea”on their weekly show “If These Walls Could Talk” live from Pangea Restaurant on the Lower Eastside of NYC, with their unique style of honest, and emotional interviews, sharing the fascinating backstory of celebrities, entertainers, recording artists, writers and artists and bringing their audience along for a fantastic  ride.

Felipe Rose  will be a featured guest on “If These Walls Could Talk” with hosts Wendy Stuart and Tym Moss on Wednesday, November 10th, 2021 at 2 PM ET live from the infamous Pangea Restaurant.

Wendy Stuart is an author, celebrity interviewer, model, filmmaker and hosts “Pandemic Cooking With Wendy,” a popular Youtube comedic cooking show born in the era of Covid-19, and TriVersity Talk, a weekly web series with featured guests discussing their lives, activism and pressing issues in the LGBTQ Community.

Felipe is a native New Yorker, having been raised and brought up in Brooklyn. His Puerto Rican and Native American heritage (Lakota Sioux) is reflected in the clothing that he dons to perform. This is not just a costume but also a signifier of where he comes from and his long association with Native American groups across the country. Felipe has been called a “shadow walker”, a Native term for walking in two worlds. Having spent the last 37 years involved in one of the most visible and active groups in pop music, he now brings his energy to Tomahawk Records and The Tomahawk Group, Inc. 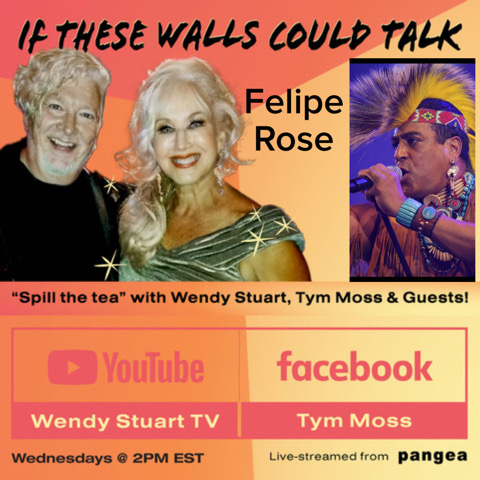 Throughout his childhood he displayed intense creative interest in the arts. His mother was a source of tremendous encouragement. She was, in fact, a Copa Cabana dancer in the late 1940s and early 50’s, so music and show business were a constant influence in his home life and beyond. Felipe’s talent manifested itself at an early age and by 16 he had secured a scholarship with the Ballet de Puerto Rico, under the supervision of Pasqual Guzman. During his tenure with the Ballet Company, and while performing at New York’s Lincoln Center, a choreographed dance-drama recital of “Julia de Burgos”, the story of the famous Puerto Rican poetess whose life was cut short by committing suicide. The New York Post’s called his performance “Poignant and Compelling.” That review is what got Felipe hooked, and he knew that, it would be his destiny. Felipe’s native aunt later introduced him to the different influences in dance. “Why not also honor your father’s heritage, and dress in your tribal regalia in your dance journey through culture?”

Felipe came to prominence in the 1970’s out of the urban gay clubs and discotheques in New York City, To this day VILLAGE PEOPLE have become and remain a pop culture mainstay in commercials and television appearances as they continue to tour the world with their campy hits which where written by the original ex lead singer Victor Willis. Today the hits have become a mainstay phenomenon at sports events, wedding and party’s around the world.

Village People have sold over 100 million records to date and have won many international music awards and garnering over 30 Platinum and Gold records.  Felipe’s highest moment of achievement was a receiving a Star on the Hollywood of Fame, and a month later induction into the Native American Music Hall of Fame.

Watch Felipe Rose on “If These Walls Could Talk” with hosts Wendy Stuart and Tym Moss on YouTube here: