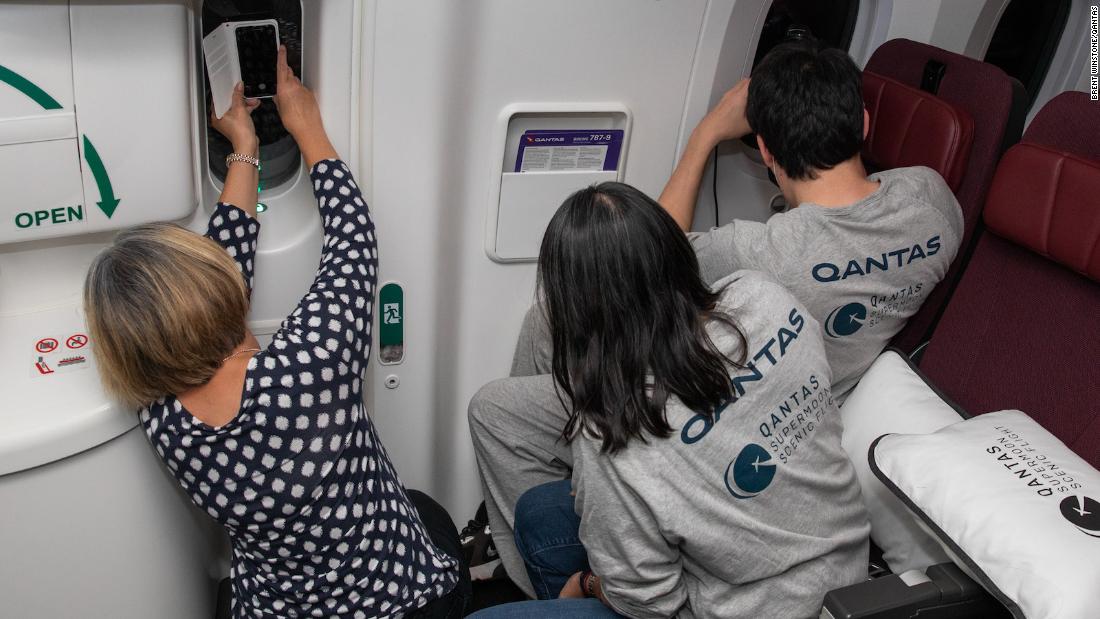 Sydney (CNN) — The moon was illuminated a bright coppery red, big and beaming in the night sky.

And as people on the ground in Australia and New Zealand and parts of the western United States peered up to admire this rare super blood moon eclipse on May 26, perhaps the best view of the astronomical marvel came from 43,000 feet in the sky — on board a Qantas-operated “flight to nowhere.”

Crisscrossing the skies above Sydney harbor for three hours, 180 travelers enjoyed a front row seat for this spectacular lunar event.

“It was wonderful, I think I’ve never seen [the moon] in such a way from land,” passenger Abdullah Khurram told CNN.

Tickets for the flight sold out in 2.5 minutes, as flight-starved Aussie travelers — currently limited to traveling within the country or to New Zealand as part of the travel bubble — snapped up the opportunity for a joy ride with a view.

A supermoon occurs when the moon is at its closest point in its orbit to Earth, which means the moon looks brighter and bigger to the human eye.

Meanwhile, a total lunar eclipse happens when the moon passes through Earth’s shadow, and consequently looks darker and redder.

“The red color comes from sunlight filtering through Earth’s atmosphere — a ring of light created by all the sunrises and sunsets happening around our planet at that time,” explains NASA on its website.

All passengers on the Qantas supermoon flight were given a chance to take photos of the rare spectacle.

Qantas worked with astronomer Dr. Vanessa Moss to create “the optimal flight path over the Pacific Ocean.” The airline mapped out the flight path around the trajectory of the rising moon and the timing of the total eclipse.

Astronomer Moss, who was also on board the flight to provide commentary and entertain travelers with lunar insights, told CNN pre-flight that a super blood moon eclipse is a pretty unusual occurrence.

“Individually, a super moon and a total lunar eclipse aren’t so rare, but when you combine the two, it can be quite rare,” she said.

The flight took place on a Boeing 787 Dreamliner, picked because of its large windows that offer optimum opportunities for moon gazing.

When the eclipse began at 21:11 local time, crew dimmed the cabin lights. As the moon crossed into the darkest part of the Earth’s shadow, passengers experienced totality for 14 minutes and 30 seconds.

The flight was led by Captain Alex Passerini (left).

Qantas Chief Technical Pilot, Captain Alex Passerini, first flew the aircraft north from Sydney Airport, and then back south, intending to give all passengers on board the chance to gaze at the moon, snap a photo or two, and take in the experience.

“Normally we’re on fixed routes, but we’ve been given freedom to operate within a certain area of airspace by Air Services Australia, and that will allow us to keep maneuvering the airplane, just to keep that moon in the best position,” Passerini told CNN.

The pilot, who has spent much of the pandemic flying repatriation flights and transporting freight, commented on the “energy” of the travelers and said it was a treat to fly a bunch of excited passengers.

Aviation enthusiast Rory Ding told CNN he was excited not only to see this rare lunar event from the air, but also get the chance to fly on a 787 Dreamliner aircraft for the first time since the pandemic hit Australia.

The view from the plane window was “like nothing I had seen before,” said Ding.

Ding, who was seated in economy, said there was a great atmosphere on board, with passengers letting other passengers swap into window seats to ensure they got a glimpse of the eclipse.

Passenger Aaron Seeto told CNN that even though he had an aisle seat, his seat neighbor shared the window view with him.

“It was amazing,” Seeto said. “Especially just seeing it so high up in the sky with your eyes.”

Ding was also impressed by the lunar view.

“There was a very deep red glow to the moon, it was vibrant detailed and captivating.”

Ding reckons “flights to nowhere” are a “win-win.”

“The airlines get to keep their aircraft in the sky and staff employed,” he said. “From a passenger perspective, it’s a great way to feel that sense of excitement you used to get when you were traveling overseas on a long-awaited trip.”

“It’s a really great idea, more of these should be done.”

Like many airlines, Qantas has struggled financially during the pandemic — and with Australia largely closed off to intentional travel, much of the carrier’s fleet has been grounded for over a year.

The supermoon flight is the latest in a series of Qantas flights to nowhere, which started back in October with a flight above some of Australia’s most famous landmarks.

Qantas has been criticized by some for needlessly burning fuel during the climate crisis. Last fall, a spokesperson for Friends of the Earth told CNN Travel that they saw the flight as “essentially the definition of a pointless trip.”

Qantas pledged to offset 100% of the October flight’s carbon emissions and plans to do the same for the supermoon flight.

Francesca Street was reporting from London

16 Of The Best Beard Products To Use In Every Step Of Your Grooming Regime (Updated 2022)
10 Of The Best Leather Gloves To Upgrade Your Winter Wares (2022 Edition)
Watch the earliest known detective film, featuring a very confused Sherlock Holmes.
India reportedly cracks down on cheap Chinese phones
The world’s most fascinating abandoned towns and cities