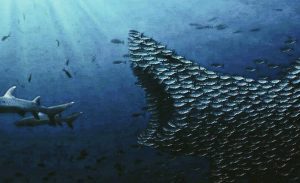 What started as a few amateur investors trying to undermine the efforts of hedge funds to make money from a declining stock is having wider repercussions.

As you’re probably aware, shares in US computer games retailer GameStop have been going through the roof since the start of the year and are currently priced around 8x higher than they were a month ago. This isn’t because GameStop invented a new kind of game, or anything likes that, it’s because a bunch of amateur investors coordinated via Reddit to buy as much of the stock as they could.

Here, too, the reason wasn’t a sudden belief in a dramatic change of fortunes for the company, but an apparent desire to scupper the plans of some hedge funds that had taken significant short positions on the stock. Short selling involves borrowing a stock from a broker in order to immediately sell it. The plan is that when you subsequently buy the stock in order to give it back to the broker, you do so at a lower price and thus pocket the difference.

It seems the amateur investors didn’t approve of this shorting of GameStop stock and decided to make its price go up by simply buying it. They seem to have succeeded beyond their wildest dreams and, as a consequence, have put hedge funds such as Melvin Capital in a very difficult position.

There’s no limit to the downside of shorting, you see. If you buy some equity the old fashioned way, the most money you can lose is all of your investment. But since short positions lose money every time the share price goes up, it’s possible to lose many multiples of your original investment when you eventually have to return the stock you borrowed to the broker.

That seems to be exactly what happened to Melvin, which the FT reports closed its short position having lost $3.75 billion. Ouch. It looks like most other significant short positions in GameStop are also being closed for significant losses too. In one sense this is surprising since the shares will presumably go back down eventually, so why not just wait it out? But there’s no sign of that yet and presumably the brokers have started asking for their shares back so they can sell them properly at enormous profit.

This equity mania seems to be metastasising to other stocks, including those in the telecoms sector. One such stock is that of Finnish kit vendor Nokia, which has seen a 50% jump this week for no good reason, but is down in pre-market trading.

“Nokia is issuing this stock exchange release to comment on recent trading activity of its stock,” said a Nokia announcement late yesterday. “Nokia is not aware of any material, undisclosed corporate developments or material change in its business or affairs that has not been publicly disclosed that would account for the recent increase in the market price or trading volume of its shares.”

Blackberry is another and, at this stage, it’s impossible to predict where the focus of the extraordinary buying and selling will be next. None of this seems to have anything to do with the fundamentals of the companies in question and, instead, is the product of small communities of amateur investors trying their hand at what institutional ones have been doing for decades – manipulating markets in order to make money from them.

However, the rules seem to be different for amateurs, with hedge funds apparently calling for the financial authorities to put a stop to this sort of thing. It’s not clear whether what is taking place on Reddit and other internet platforms is any different to what happens in the expensive bars and restaurants in the world’s financial districts, but that’s not stopping the inevitable attempts at censorship.

The most interesting broader theme behind all this oddness is that is seems to be an expression of general resentment towards the financial sector by people still bearing scars from the 2008 financial crisis. The passage below is copied from here and reproduced because there have apparently been multiple attempts to censor it. It’s written by a member of the Reddit group most responsible for what has happened. Then there’s a video interview with equity analyst Charles Payne and finally a tweet from media figure Dave Portnoy, who has invested heavily in Nokia end expects its share price to keep going up. Image credit.

An Open Letter to Melvin Capital, CNBC, Boomers, and WSB

I was in my early teens during the ’08 crisis. I vividly remember the enormous repercussions that the reckless actions by those on Wall Street had in my personal life, and the lives of those close to me. I was fortunate – my parents were prudent and a little paranoid, and they had some food storage saved up. When that crisis hit our family, we were able to keep our little house, but we lived off of pancake mix, and powdered milk, and beans and rice for a year. Ever since then, my parents have kept a food storage, and they keep it updated and fresh.

Those close to me, my friends and extended family, were not nearly as fortunate. My aunt moved in with us and paid what little rent she could to my family while she tried to find any sort of work. Do you know what tomato soup made out of school cafeteria ketchup packets taste like? My friends got to find out. Almost a year after the crisis’ low, my dad had stabilized our income stream and to help out others, he was hiring my friends’ dads for odd house work. One of them built a new closet in our guest room. Another one did some landscaping in our backyard. I will forever be so proud of my parents, because in a time of need, even when I have no doubt money was still tight, they had the mindfulness and compassion to help out those who absolutely needed it.

To Melvin Capital: you stand for everything that I hated during that time. You’re a firm who makes money off of exploiting a company and manipulating markets and media to your advantage. Your continued existence is a sharp reminder that the ones in charge of so much hardship during the ’08 crisis were not punished. And your blatant disregard for the law, made obvious months ago through your (for the Melvin lawyers out there: alleged) illegal naked short selling and more recently your obscene market manipulation after hours shows that you haven’t learned a single thing since ’08. And why would you? Your ilk were bailed out and rewarded for terrible and illegal financial decisions that negatively changed the lives of millions. I bought shares a few days ago. I dumped my savings into GME, paid my rent for this month with my credit card, and dumped my rent money into more GME (which for the people here at WSB, I would not recommend). And I’m holding. This is personal for me, and millions of others. You can drop the price of GME after hours $120, I’m not going anywhere. You can pay for thousands of reddit bots, I’m holding. You can get every mainstream media outlet to demonize us, I don’t care. I’m making this as painful as I can for you.

To CNBC: you must realize your short term gains through promoting institutions’ agenda is just that – short term. Your staple audience will soon become too old to care, and the millions of us, not just at WSB but every person affected by the ’08 crash that’s now paying attention to GME, are going to remember how you stuck up for the firms that ruined so many of us, and tried to tear down the little guys. I know for sure I’ll remember this. In response, here is a list of CNBC sponsors and partners. They include, but are not limited to, IBM, Cisco, TMobile, JPMorgan, Oracle, and ZipRecruiter. Their parent company is NBCUniversal, owned by Comcast and GE.

To the boomers, and/or people close to that age, just now paying attention to these “millennial blog posts”: you realize that, even if you weren’t adversely effected by the ’08 crash, your children and perhaps grandchildren most likely were? We’re not enemies, we’re on the same side. Stop listening to the media that’s making us out to be market destroyers, and start rooting for us, because we have a once in a lifetime opportunity to punish the sort of people who caused so much pain and stress a decade ago, and we’re taking that opportunity. Your children, your grandchildren, might have suffered as I described because of the institutions that we’re fighting against. You really want to choose them, over your own family and friends? We’re not asking you to risk your 401k or retirement fund on a single GME bet. We’re just asking you to be understanding, supportive, and to not support the people that caused so much suffering a decade ago.

To WSB: you all are amazing. I imagine that I’m not the only one that this is personal for. I’ve read myself so many posts on what you guys went through during the ’08 crash. Whether you’re here for the gains, to stick it to the man as I am, or just to be part of a potentially market changing movement – thank you. Each and every one of you are the reason that we have this chance. I’ve never felt this optimistic about the future before. This is life changing amounts of money for so many of you, and to be part of a rare instance of a wealth distribution from the rich to the poor is just incredible. I love you all.

(Im not a financial adviser. Don’t listen to me) pic.twitter.com/oYrsPOz8Vx