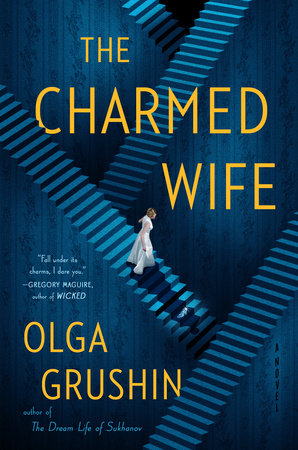 The following is excerpted from Olga Grushin’s latest novel, The Charmed Wife, a sophisticated fairytale for the 21st century. Grushin was born in Moscow and moved to the United States at 18. She is the author of three previous novels, including The Dream Life of Sukhanov, which won the New York Public Library Young Lions Fiction Award and earned her a place on Granta’s once-a-decade Best Young American Novelists list. She lives outside Washington, DC, with her two children.

Once upon a time, there lived a man who had a wife and a daughter. His wife was loving, his daughter sweet-natured, and his trade successful, and for a while all went well with him. But one day all his ships sank in a storm, then his wife took ill and died, and he had nothing left but his little girl. He wanted to do right by her, and so, after grieving for a year, he married again to give the girl a new mother; but his second wife turned out to be haughty and cold. Soon the merchant himself fell sick and died, and his daughter was left all alone in the world, with no one but her stepmother to take care of her. The woman had two daughters of her own, from an earlier marriage; like their mother, they were proud and unkind, and disliked the pretty little girl on sight. While her father still lived, they had been afraid to abuse her openly, but one week had not passed since his funeral when the three of them began to treat her like a servant, forcing her to clean the house and cook for them. She never complained but worked at her menial tasks with a smile and a song, and in a few years blossomed into a beautiful maiden, yet so dirty and ragged was she from her daily labors that her sharp-tongued stepsisters gave her a mocking new name.

“Cinderella!” my daughter would always cry at this point in the story, beaming at me, and I would smile back, right her sliding blanket, and go on. The rest was soon told: years of drudgery and obedience passed, none too quickly, and then came a fairy godmother, and mice turned into horses, and a pumpkin carriage, and, at long last, a ball with its handsome prince. In due course the palace clock chimed midnight, and the glass slipper was lost and the love-struck admirer gained; but before I could come to the royal wedding itself, my daughter would ask about the dresses of the guests at the ball, and did the ladies’ skirts have those long puffy trains that looked like meringues, and if so, didn’t the cute little pages with their scarlet stockings and silver trays trip over them and fall and spill the drinks all over everyone, and what kind of sweets did they serve anyway, did they have the peach ice cream, her favorite, or make do with the lemon sorbet instead, which tasted like sour water—and not once could I arrive at the ending, for amidst the giggles she would soon drift off to sleep.

She never wanted any other story told, only this one, and she never wanted it told in any other words. She had learned it by heart by the time she turned five years old and would catch me out in any verbal departure, no matter how trivial, and demand the “real truth” on the verge of tears. After a few slip-ups, some accidental, some less so, I knew not to alter a single sentence. I must have told it dozens, no, hundreds of times; but while the story stayed exactly the same, her questions changed. When she was six, she no longer asked about the ruffles and the sweets but wanted to know if the glass shoes were not terribly uncomfortable to dance in and whether the stepsisters were not upset to have been tricked. Those I could answer, smiling still; but one night shortly after her seventh birthday, she told me: “Nanny Nanny says that love is like a plant, it grows little by little, it needs to have light and water and time to get tall and strong. So how was there enough time to fall in love if it was only one ball?”

“Love is not always like a plant,” I said to my child in a measured tone.

Her west-facing bedroom was aglow with the setting sun, everything pink and sweet. I could hear a lonely siren crying far away. My daughter was looking at me with no trace of her usual smile, eyebrows raised in a triangle of expectation. I bent to adjust her rose-tinted pillows as I scrambled for the right words in my mind, thinking all the while that if I were able to be more forceful in my dealings with hired help, I would chide Nanny Nanny most severely.

When I straightened, I took her small, hot hand in mine. A second siren had joined the first by now, and then another, and yet another—familiar wails heralding distant disasters, fires or wrecks or even death somewhere out there—but not here, not in my world, for everything was tranquil, everything was special, everything was charmed in my world.

“Love is not always like a plant,” I said to my child in a measured tone. “Sometimes it is, but other times, it is more like lightning, it strikes all of a sudden. You look at someone, and there you are, in love.”

And in that moment, I had no answer for her.

Her little brother, at two years old, required much supervision, so I began to use my exhaustion as an excuse for ceasing my nighttime visits for a while after; I would only come by the flaming sunset room to kiss her forehead and wish her pleasant dreams, then depart with a rushed swish of silk. And when, some months later, I was finally ready to resume the telling of the story, I found that she had moved on.

“Tell me of Cousin Jack and the Giant Beanstalk,” she chanted as she bounced up and down on her bed. “I like Jack, he’s so much fun, we should have him over for a playdate.”

I tried telling the story to her brother as well when he was little. He tolerated it briefly, although with him, too, I could never reach the ending before he interrupted, curious about the colors of the mouse horses’ coats and the uniforms of the guards at the palace gates. But after only a few times, he started to grow impatient with it.

“Really, don’t you know any other stories?” he drawled one evening, bored, his eyes wandering over the painted clouds of the nursery ceiling.

But whenever I thought this, another voice, much older than that of a seven-year-old, would steal into my mind.

I knew that my children could be cruel just like any other children, in spite of having been blessed by the fairies in manifold ways, but it came as a painful pang all the same. Perhaps I should have chastised him, but I only smiled in silence, as I tend to do when I am truly hurt, and thought: Well, but maybe he’s right, maybe it simply isn’t the kind of story that bears a lot of repetition. So I told him about a vagabond soldier and three magic dogs. I did not omit any of the frightening bits, and Ro fell asleep with a look of satisfaction on his face.

After that, I never mentioned the slipper or the ball to either of my children, nor indeed to anyone else—for whenever I tried, my daughter’s small voice would ring out clear and merciless in my ear: “Love is like a plant, it grows little by little.” I thought of other replies I could have given her. Love for a child is nothing like a plant, I could have told her; it is instant and complete, a full and sure surrender, like falling into deep, deep waters that close over you. At times the waters are warm and tranquil, familiar like an all-enveloping blanket, a one-eyed teddy bear, a worn-out bedtime story, the milky smell behind a baby’s tiny seashell of an ear, and they carry you through your days in somnolent, animal peace; and at other times, they turn roiling and fierce, taking your breath away with fears and worries, tossing you about on sleepless nights—yet this love is always there, always whole, needing no light to feed it.

But whenever I thought this, another voice, much older than that of a seven-year-old, would steal into my mind. Ah, but love for a man is nothing like love for a child, it would say in a sly, silky whisper. It is more like the sun that burns bright in your eyes, is it not—and when the sun is gone and you close your eyes, defeated, its afterimage is blackness.

The afterimage of this kind of love is hate.